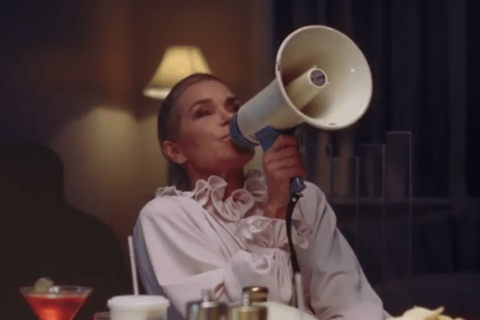 Just about everything you need to know if you fashion month passed you by - all things considered.

It’s sad, but it’s over. New York, London, Milan, Paris – the four major fashion weeks go in that order every September and now that Nicolas Ghesquière walked his models down the runway for Louis Vuitton, Fashion Month has come to a close. But while this year’s festivities were in full throttle, the only thing people seemed to talk about was Fashion Month.

The events on and off the runway generated more than 2.2 social media mentions this year, according to international social media analytics firm Talkwalker. In addition, there were more than 97.1 million interactions (likes, RT, shares, comments) and more than 861,000 unique authors of individual posts. Not so surprisingly, Paris Fashion Week was the most talked about with an astounding 19.6 million interactions mentioning it’s name. Here we break down the most talked about moments of fashion month, all thanks to a little thing called the internet.

#1: Cardi B and Nicki Minaj’s cat fight was the result of a long standing feud

It was hard to focus on just the fashion at NYFW when there was so much drama happening off the runway. The top moment of the month in terms of mentions and engagement on social media was the fight that took place between rappers Cardi B and Nicki Minaj. There’s no real short answer for the reason why Cardi suddenly unbuckled one of her heels and hurled it across the room at the Harper’s Bazaar Icons party towards Minaj. Turns out, tensions between them had been boiling for a while. Comments Minaj supposedly made about Cardi’s ability to take care of her new born baby, Kulture Kiari Cephus, were enough to set her off. Cardi was escorted out of the party with a knot on her forehead afterward.  Ouch.

These expensive … these is bloody shoes and Cardi B flossed 'em at NYFW by taking one off and chucking it at Nicki Minaj ? Hit up stories for more Cardi taking her lumps #cardib #nickiminaj #tmz #nyfw ?:getty

#2: Versace is now property of Capri Holdings, (or Michael Kors as you know it now)

Michael Kors was one of the most talked about celebs at New York Fashion Week. The Kors conglomerate-in-the-making bought famed Italian fashion house Versace over the course of Milan Fashion Week, but the power move came at a hefty price. The purchase rang up a bill of approximately $2.12 billion (including debt) for the company, which is two and half time the brand’s current revenue. Michael Kors will also be renamed Capri Holdings once the deal is closed in the fourth quarter of 2019 and has already set out big plans for Versace, including increasing its global retail footprint from 200 stores to 300, building out e-commerce and expanding men’s and women’s accessories and footwear. “This is a very exciting moment for Versace,” said Donatella Versace in a statement. No need to worry – she’ll stay on as Versace’s creative director after it’s officially Kors’.

Last rehearsals in location before the show TODAY!! Follow the show LIVE on @Versace at 8pm CEST. #VersaceSS19 #VersaceLive

#3: Size inclusivity and model diversity are a priority for celebs like Rihanna and it’s about damn time

Rihanna‘s first ever Savage X Fenty lingerie runway show attracted the most attention in the press at NYFW, especially because her show featured a diverse cast similar to the plethora of her Fenty Beauty foundation shades. Gorgeous, curvy women walked the runway in fluorescent coloured négligées and leopard printed bras along with a very pregnant Slick Woods, (who had her baby a few hours after the show), and other top models like Gigi and Bella Hadid.

Still CRYING off this #SavageXFW18 moment in NYC! ?| Relive the experience at YouTube.com/Rihanna ✖️| Shop the looks in the bio!

#4: It seems Karl Lagerfeld can do no wrong

It’s been 35 years since Karl Lagerfeld was named head creative director of Chanel and in those 35 years he’s proven that he is the best man for the job. The company took the number two spot for most talked about brands on social media in 2018. Year after year, Lagerfeld has somehow managed to keep the brand’s classic tweed jacket interesting to the brand’s cult-like following. His Spring/Summer 2019 show at Paris Fashion Week took viewers to an artificial seaside for a break from the chaos of running from runway show to runway show and everyday life. Effortlessly chic, carefree looking models strode in the sand with sandals in hand making it hard not to crave the beach in the beginning of fall.

#5: The fashion industry has absorbed the #MeToo movement

Models waltzed down Rick Owens’ Spring/Summer 2019 catwalk with torches in hand to go with the super futuristic and geometric designs they wore, then set flame to a large tangly black pyre and simply strutted away. Owens was one of the most talked about celebrities at PFW and his runway show coincidentally seemed to reflect the news of the week, which involved Christine Blasey Ford’s testimony against President Trump’s Supreme Court nominee Brett Kavanaugh for sexual assault. It could be argued that Owens’ PFW show was representative of the impact of the #MeToo movement.

#6: Chiara Ferragni is as influential as ever

Italy’s reigning fashion influencer export always seems to be trending on social media. In fact, Chiara Ferragni had three different Instagram posts rank in the top 5 most-liked posts of Milan, Paris and London Fashion weeks. The following photo earned her the number one spot for most liked and viewed social posts during MFW. Where’s the heart eyes emoji?

After 12 years at the helm of Givenchy, Riccardo Tisci was named Burberry‘s new chief creative officer this March. He made his Burberry design debut at London Fashion Week with the month’s first over 100 model show, which stunned crowds and critics alike. Burberry was ranked most talked about brand at LFW. Tisci shared photos with the hashtag “#thankful” after the show came to an end, seemingly joyful and appreciative of all the love he’s received so far. And since his appointment he’s been a favourite amongst celebrities like RiRi, Julia Roberts, Madonna and more.

That’s right – your favourite Spice Girl has now been designing the clothing, accessories and footwear for her own brand, Victoria Beckham, for 10 years. And not so surprisingly, Posh was the most talked about celebrity of London Fashion Week. David Beckham, the former songstress’ husband, and their children cheered her on while she bestowed a classically beautiful VB collection during LFW. She also launched an exclusive collection of special tees, sweatshirts and accessories for the brand’s tenth anniversary. On Instagram the style star seemed overjoyed with how the show went, captioning one of her photos “So grateful for the past 10 years. Thank u #TeamVB x VB Kisses”.

#9: Sandara Park is the most famous celebrity we’ve never heard of

Sandara Park topped the list of the most-talked about celebrities at Paris Fashion Week and if you’re thinking, “who?” you’re not alone. Turns out Park is a 33-year-old South Korean television presenter/actress and her luxe, directional streetwear ensembles have earned her an Instagram following of 6.9 million. We’re ready to get with the program and are totally on board with Park’s chameleonic style.

#10: The old supermodels are back and bigger than ever

Shalom Harlow closed the show for Versace. Monica Bellucci opened Dolce & Gabbana as Carla Bruni, Helena Christensen and Eva Herzigova followed behind her. Supermodel legends #blessed the runways this fashion month and it was thrilling to seem them confidently grace the stage once again. We’re hoping it’s a trend next year too.

PHOTO VIA INSTAGRAM/@voguemagazine
Get the best of FASHION in your inbox Thanks for signing up!
The latest fashion, beauty and celeb news delivered right to your email #FASHIONforall Now, check your inbox to complete your subscription
We won’t ever use your email address for anything else
Want even more FASHION? Follow us on social media.