It’s a scorching day in New York City and actress Sarah Gadon is sitting tolerantly in the back seat of an SUV on the Brooklyn Bridge. Three AC vents are blasting at her and the car’s driver is throwing F-bombs at the rush-hour traffic like some crazed Kanye West impersonator. A cacophony of sirens—fire trucks, police cars and ambulances—endeavour to interrupt Gadon’s thoughts to no avail. The fracas would likely rattle anyone partaking in an impromptu interview, but the Toronto-born actress is somehow unruffled. Her amused expressions during the hour-and-a-half ride to Chelsea—direct from her cover shoot with FASHION in Brooklyn—bring out the improv performer in her. When the clamour hits its peak beside an ear-splitting construction site, Gadon says, as if on cue: “Without disruptions in life, where would we be?”

Gadon’s life has been filled with extraordinary disruptions. At a young age she thought she could be a dancer and went on to enroll in the National Ballet School of Canada’s junior associate program. Soon she found herself more interested in the silver screen than the stage. After being on a number of Canadian TV shows, Gadon’s big break was getting cast alongside Keira Knightley and Viggo Mortensen in 2011’s A Dangerous Method, a psychological drama helmed by Canadian director David Cronenberg. In that film, she impressed Cronenberg so much he ended up casting her in two more of his movies: Cosmopolis and last year’s noir-like send-up of Hollywood Maps to the Stars. She also appeared in Antiviral, a film by Cronenberg’s son, Brandon.

Gadon’s momentum hasn’t slowed down: She signed her first major beauty contract with Giorgio Armani Beauty and her next two films—The Girl King and The 9th Life of Louis Drax—aim to propel her into the Rachel McAdams-ian stratosphere of fame. The business pleases Gadon, but she won’t be moving to Tinseltown anytime soon. “I don’t love LA,” she says. “It’s a great place to visit; it’s a great place to meet and work, but I don’t want to live there. I’m a really proud, happy Canadian. I think we’ve got it figured out in our country. For example, gay marriage has just been legalized in all of the U.S. and it’s like, ‘Wow, hashtag lovewins,’ but that’s not necessarily a leap forward compared to what we’ve already experienced in Canada years ago…. Toronto is such a progressive city. When you’ve travelled to other places in the world, you realize how unprogressive they are.”

When choosing what movies to take on, Gadon proves to be just as impassioned. She says that much of what she does is driven by art and creativity rather than delusions of grandeur or clichéd dreams of fame. An avid member of the Art Gallery of Ontario, Gadon raves about the Basquiat exhibit she saw earlier this year and plans to see others whenever she returns home. “My parents were very pro-education,” she says. “I went through some interesting art-enriched programs.” Being the daughter of a teacher mom (“my upbringing gave me a studious approach to acting; I do a lot of supplementary reading for roles”) and a psychologist dad didn’t hurt either. “We do a lot of communicating in our family,” she says, laughing. “Even as a kid, there was a lot of, ‘Talk about your feelings’ or ‘How does that make you feel?’ We spoke about everything and that definitely seeps into my work life.” Because of all the emotional exchanges, Gadon says she must empathize with characters on some level before portraying them. This was especially trying with Natalie, the woman she plays in the upcoming supernatural thriller The 9th Life of Louis Drax (opposite Jamie Dornan).

“I’m least like her of all the characters I’ve ever played,” says Gadon. “She’s somebody who thrives off of male attention; I was never really one of those girls.” Gadon didn’t need validation, she says. “I think it comes from having a lot of strong women in my life.” Looking pretty or being charming was never a priority either. “My mom didn’t even really let me buy fashion magazines until I was 16,” she says. “I just didn’t realize that they were a part of the world. I was reading books; I was a big Anne of Green Gables fan as a kid. And then I was a big gothic romance fan; I loved Jane Eyre and Frankenstein. I grew up on Pride and Prejudice and Jane Austen.”

Her attraction to the dames of classic dramas came in handy for her work in The Girl King. Set in the 17th century, the film focuses on the lives of two figures in history: Queen Christina of Sweden and Countess Ebba Sparre, her lady in waiting, played by Gadon. Both women, who were romantically involved outside the court, had a stronghold on politics and the fashion scene of their respective time. When it came to their views on society, the twosome shared a liberal mindset that kept many puritan enemies nipping at their heels. “I thought this was very much so a female love story,” says Gadon. “It’s about the struggle that Christina is going through to understand her identity and sexuality, so a lot of their interactions were aggressive…. There’s a very strict hierarchy there and a relationship of servitude.”

The script intrigued Gadon because it addressed some hot topics permeating fashion and pop culture right now—especially the sometimes contrasting, and confounding, ideas surrounding gender fluidity. While Gadon is dressed in feminine countess attire (including a blue velvet gown, which was reproduced from a painting by French artist Sébastien Bourdon), Queen Christina, played by Malin Buska, is often dressed in macho costume for situations like hunting and fencing.

“The whole discussion surrounding gender is something I have been fascinated with since I was in university taking women’s studies,” says Gadon. “I think that is what really drives a lot of my work as an actress—especially those questions about identity: Who are we? How do we form ourselves?” On whether we are on the brink of an era that puts an end to gender altogether, Gadon is not altogether convinced. “To say, ‘Oh, I think the idea of male and female binary will be eradicated in 30 years’ is a very complex statement to make.”

To this day, Gadon’s position among her male contemporaries is a topic of great discussion with journalists. “Often I think [they] get excited because I’ve worked with so many attractive, talented men,” she says, alluding to Dornan, Andrew Garfield (The Amazing Spider-Man 2) and Robert Pattinson (Cosmopolis), the latter to whom tabloids incorrectly reported she was romantically linked. “Sometimes I finish an interview and think, ‘Wow, they asked me questions entirely about the men I’ve worked with and nothing about my own work,’ and I wonder if I was a man sitting there if they would ask them about all the women they’ve worked with. That’s a bit unfortunate.”

Of her heroes in the industry, Gadon—ever the indie and foreign film lover—doesn’t pick out the usual laundry list of leading women. Instead, she cites Belgian director Agnès Varda. “She’s the godmother of the French New Wave cinema—she’s this incredible artist who was one of the first women to ever start her own production company,” Gadon says, noting that Varda inspired her to direct an episode for The Movie Network’s docu-series Reelside, shot primarily in the Bruce Peninsula. “I think often in classical cinema you see women as the object. They’re the ones who are looked at.” It was Varda’s film Cléo from 5 to 7 that got Gadon hooked. “At the beginning of the film, the woman is the object, we admire her. Then she goes through this kind of identity crisis, and, halfway through the movie, she starts to do the looking and the film becomes from her perspective. It’s one of those films that’s stayed with me.”

Gadon’s appreciation of fashion has also stayed with her. She picked up style advice through what she calls a mentorship with Nicholas Mellamphy, vice-president and buying director at The Room at Hudson’s Bay in Toronto. He helped her choose a Jason Wu dress for her first premiere at the Toronto International Film Festival for A Dangerous Method and has been a style adviser to her ever since. “It was kind of a real moment of partnership with The Room,” she recalls. “They’ve always been so supportive about helping me meet designers and get ready for events. People don’t realize how stressful and political finding dresses for red carpets can be.” This fashion education has also helped her at work. Now Gadon is much more aware of what her characters wear—from the young Queen Elizabeth II in the recently released A Royal Night Out to the Kennedy-era role in an upcoming TV series with James Franco called 11/22/63—and what that communicates. “How a character moves in a garment is an external expression of their psyche. I’ve learned that I have so much to learn.”

As we pull up to a busy intersection near her temporary New York home, the honking is so loud she nearly shouts that she’s wearing a Joe Fresh dress with Manolo Blahnik flats. “I think fashion can be an exercise in knowing who you are and building your own personality, and that is exactly what makes me embrace it.” 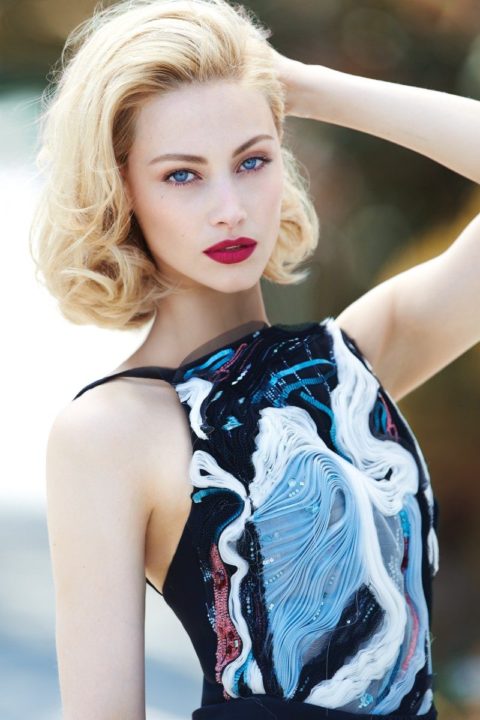 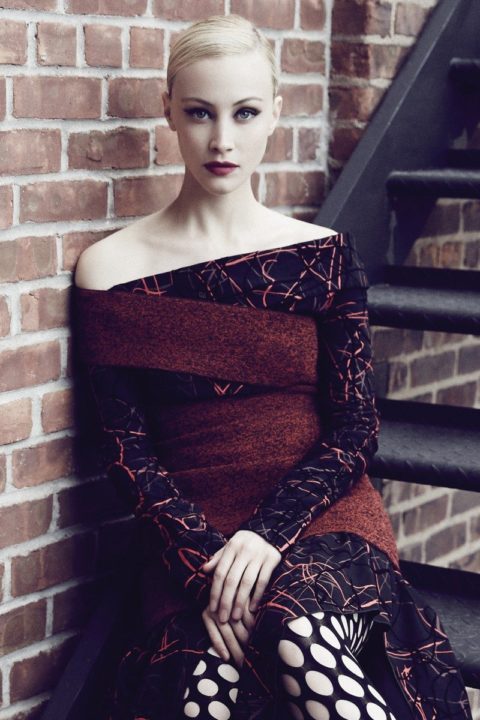 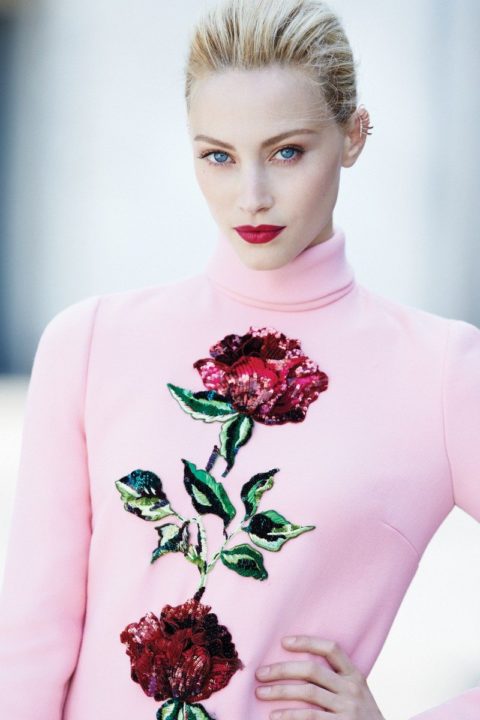 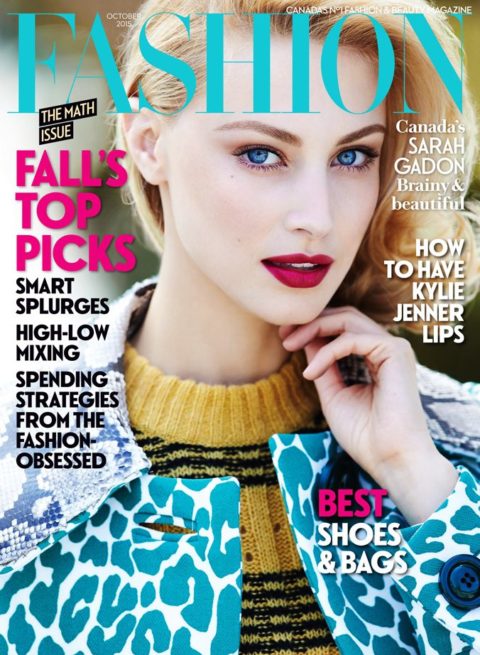 Photographed by Max Abadian and styled by George Antonopoulos, Sarah Gadon wears a coat $5,785, and sweater, $760, Miu Miu, Makeup: On skin, Maestro Fusion and Fluid Sheer; On eyes, eye tint; and on lips, Rouge Ecstasy. All Giorgio Armani. Hair, Ben Skervin for Streeters/Oribe Hair Care. Makeup, Genevieve Herr for Sally Harlor. Fashion Assistant, Janae Young.
Get the best of FASHION in your inbox Thanks for signing up!
The latest fashion, beauty and celeb news delivered right to your email #FASHIONforall Now, check your inbox to complete your subscription
We won’t ever use your email address for anything else
Want even more FASHION? Follow us on social media.