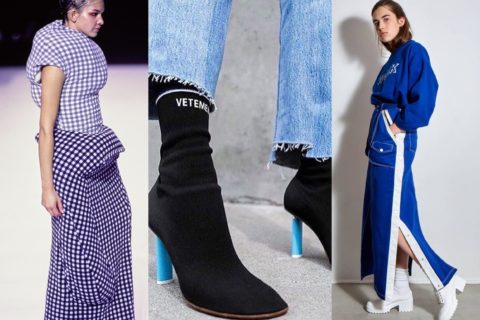 What Fashion Hacking is and How It’s Redefining the Industry

Creative disrupters are hacking their way into the biz by reshaping classic patterns and redefining design.

Andrea Crews is the alter ego of French artist and fashion designer Maroussia Rebecq. In fact, it would be more accurate to say that Andrea Crews is Rebecq’s altering ego. It’s a collective whose work encompasses fashion, art and activism, with plenty of messy overlap. Of the three, activism is the most interesting. The Andrea Crews brand of activism can be described as hacking, but it’s not the sort that breaches NSA firewalls or leapfrogs into Netflix accounts. Andrea Crews hacks fashion codes.

Take a classic piqué-jersey polo shirt. What makes it a polo shirt? The colossal polo player or crocodile on the front is a giveaway, of course, but beyond the logo, a polo shirt boils down to the specific design elements dreamt up by its inventor, René Lacoste: the piqué-knit cotton fabric, the ribbed hem on the shirt and sleeves and the three-buttoned placket opening at the neck. Andrea Crews will take an old polo shirt and shift the whole thing over a notch so that the collar and placket sit on the shoulder. Then it’ll blow up the short, cuffed polo sleeve into a batwing. What comes out on the other side is a garment that’s recognizable but has been deconstructed and tinkered into a new shape and volume. “What we propose is a new sculpture,” says Rebecq.

Andrea Crews’s upcycling falls in line with the work of Martin Margiela, Rei Kawakubo and Miguel Adrover, all of whom were, and still are, to some degree, design hackers. Adrover is the Mallorcan-born designer whose 2000 “uptown”” collection in New York featured a Louis Vuitton bag-cum-miniskirt and a Burberry plaid trench turned inside out and backwards and remade into a dress. In those days, brand hacking like that was headline and lawsuit material. Now, everyone does it. Some, like Vetements and Gosha Rubchinskiy, have done even better. Having elevated hacking to legitimate collaborations en masse with brands like Champion, Manolo Blahnik and Fila, they appear to be developing new-generation business models around the concept. Vetements likely got the majority, if not all, of its Spring 2017 collection made by the raft of brands it collaborated with, significantly redistributing the cost of putting the collection together. What it pulled off is not just a design or brand hack but a brilliant systemic one.

Hacking has come to mean many things in the digital world. But in the early days it wasn’t sinister and destructive, or what is known as “cracking” or “black-hat hacking.” When the Internet was in its infancy, back in the 1970s and early ’80s, hacking was a hippie endeavour. Creative and idealistic, it grew out of the Tech Model Railroad Club of MIT and flourished on university campuses. Benevolent hackers believed in an open Internet community. They wanted software, systems and languages to be free and shared. When they circumvented barriers, it was to prove a point, share information and subvert code to create something new, clever and elegant.

There is something of that thinking in Maison Margiela and Comme des Garçons. They dissected the garment and fashion system and turned out ingenious and new things, like a halter top made of broken plates or a dress with a decorative ruffle gone wild. But that’s where the comparison ends. Whereas the original hackers shared free stuff, Margiela and Kawakubo are revenue-generating businesses.

Giana Gonzalez is a New York artist whose Hacking Couture workshops are in the spirit of the pioneer hackers. “I developed these diagrams explaining what Chanel was [for example] so I could create my own hacks and map the inspiration,” she says. “I was mood boarding on my own, just like everyone does. I wanted to share my research, so I started to do workshops as a way to share my process. I cut and paste and have no shame about the fact that I’m not a trained designer. In fact, it showed me that I can do it, too. I can make my own fashion and show others how to do it, too.”

That same DIY independence and creativity is also at work at Andrea Crews. Chopping up an old sweatshirt and putting a sleeve where the hood used to be or reconstructing a button-down shirt so that the sleeves turn into trouser legs and the top of the shirt hangs between the knees in the style of harem pants is what Rebecq calls “a system of taking a garment and putting it upside down or inside out in order to see it differently.”

Like Gonzalez, Rebecq started out as a visual artist. Her first foray into upcycling took place at the Palais de Tokyo contemporary art centre in Paris in 2002. Museum-goers walked into her sweatshop installation, rummaged through piles of discarded clothes and remade things with the help of a Congolese seamstress Rebecq had recruited, named Joseph Camonga. “Fashion was the medium, art was the motor and activism was the energy,” she says. In creating new clothing out of old clothing, Rebecq hoped participants would think about the desire behind the clothes we buy and throw away and our relationship to consumerism.

Even Chanel got involved. Karl Lagerfeld took a tour of the facility, and though Rebecq couldn’t convince him to sit down at a sewing machine himself, he did agree to let her send a load of old clothes to the Chanel atelier for his petites mains to rehabilitate. “I sent them fake tweed Chanel jackets,” says Rebecq. “Maybe they laughed when they saw them. But they sent them back, repaired, with all the buttons changed to Chanel buttons and embroidered with bijoux.”

From art insurgency, Andrea Crews has grown into a going concern. The latest collection morphs together snowboarders and mountain climbers in lederhosen overalls and flower-motif camo. But Andrea Crews has become a fashionable streetwear brand, and the hacking is now just a research method. The ideas for each collection still begin as upcycled prototypes, but they are then streamlined into conventional pattern pieces and produced in a nearby factory. The fabric is new; none of it is second-hand.

Rebecq thought about closing down the business, but she has been considering a new way to bring hacking back to the customer. She thinks that Andrea Crews could upcycle prototypes that would be shown on the runway during fashion week. Instead of buyers ordering the pieces they want, however, which are then produced, delivered to stores and sold in the traditional way, Andrea Crews would organize in-store ateliers and teach customers to upcycle their own runway favourites. A classic hacker scenario, it’s a scheme that would give any CFO nightmares, but Rebecq likes the idea. “Before, I wanted to change everything and revolutionize everything. Now, it’s just a little revolution.”