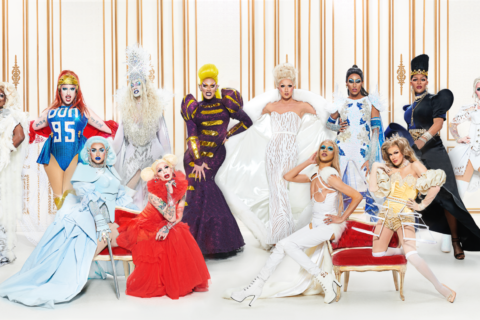 The Queens of the North are here.

After months of anticipation, the 12 queens participating in the inaugural season of Canada’s Drag Race—scheduled to premiere on July 2—have been revealed.

The show, an extension of RuPaul’s Drag Race, includes many features from the critically-acclaimed series such as the reading challenge, makeovers and Snatch Game, as well as “a dash of maple-flavoured Canadian realness,” according to the press release. Each episode will test the queens’ talents, “challenging them to master singing, dancing, acting, impersonation, costume making and improvisation.”

The season premieres Thursday, July 2 on Crave, with new episodes rolling out weekly on Crave’s TV channel, website, and the Crave app. Read on for introductions to the 12 queens competing to win the $100,000 grand prize and become Canada’s First Drag Superstar.

Anastarzia’s drag is inspired by her Caribbean roots and heavily influenced by the American drag pageant scene. She has won more than 15 pageants including Miss Canada International, Miss Gay Toronto, and Miss Black Continental @ Large. “Being on Drag Race is the culmination of an amazing 17-year career,” says Anaquway in a statement. “It allows me to represent all the little black boys and girls in third world countries like the Bahamas that have huge dreams but no resources to make them a reality.”

The drag name BOA is an acronym for “Bitch on Arrival” and also her real last name and nickname growing up. “I love drag because it gives me the opportunity to be my authentic, goofy self and bring my audience happiness,” says BOA. “When an audience is happy, so am I! I like my drag to allow people to let loose, have fun, laugh and forget about all the negativity in the world.”

Ilona Verley is a two-spirit indigenous artist who grew up Nlaka’pamux, and is known for her monochromatic head-to-toe pastel looks. “Drag is important to me as it is how I visually express how I see myself on the inside, and how I manifest my female energy as a two-spirit person!”

Jimbo has a background in clowning and cabaret, and loves to incorporate elements of those performance arts into her drag. “Drag is the perfect gateway for self-discovery and self-expression. It’s the beautiful culmination of courage, joy, performance, and artistry that inspires and entertains. Drag is a personal and political statement that challenges the social constructs to help inspire change in the world.”

My latest look! Designer and friend Sarah Runnalls and I were collaborating on a collection for Vancouver Fashion Week. Fashion Week was cancelled so I wore this look I designed and made for our collection for @atomicbirdievaudeville ‘s virtual Cabaret!! Check out Atomic Vaudeville’s Facebook to see the video! Photo by @pedro.msiqueira #drag#queen#covid#fashion#collection#viralfashion#velvetrut#dragqueen#swervesandcurves

Juice Boxx has a Bachelor of Fine Arts in Visual Arts from the University of Windsor and a Diploma of Makeup Artistry and Special FX from the College of Makeup Art and Design. “I’m so excited to be on the first season of Canada’s Drag Race and I can’t wait to show the world how incredible Canadian drag really is.”

Kiara recently quit her job and put school on pause to focus full-time on drag, and is one of very few queens of colour in the Québec drag scene. “Being on Canada’s Drag Race is a dream come true. I’m beyond excited to be on my favourite TV show and I can’t wait to make queer Canadian her-story!”

Sssssssoooft and sssssupple⛈ Giving you a little freckle in a warm turtle neck? ? by @matante.alex

Kyne runs a YouTube channel focusing on her love for makeup, costumes, hair and art, with over 100,000 subscribers. “Drag is my vehicle for all my joy, ambition and creative energy. It makes me feel alive.”

How are y’all doing on this here day? I’ve been playing with lots of colours in my makeup and having lots of fun with it ? wearing @morphebrushes pride palette ❤️

Lemon was chosen by RuPaul’s Drag Race winner Sasha Velour to be one of the models in her New York Fashion Week collaboration with Opening Ceremony, and wants to bring the NYC drag scene influence to Canada.
“I am so excited to be on Canada’s Drag Race so I can show the world I’m not only that bitch, I’m that *Canadian* bitch.”

#tbt still my favorite dress i’ve ever worn. @markgieringer is a genius ✨?

Priyanka worked as a kids TV host for years before switching to a full-time career in drag. “I love drag so much. I had a drag queen perform at my 26th birthday party and they suggested I do drag. Now three titles, two music videos, and one big opportunity to be on Canada’s Drag Race. I could be Canada’s First Ever Drag Superstar… what’s my name?!”

Rita Baga is actively involved in the LGBTQ+ community in Montréal and has appeared in several TV shows in Quebec, including her own reality show Ils de Jour, Elles de Nuit and Les Jokers, Code F and Bonsoir/Bonsoir. “I’m beyond excited to be part of this journey! I want to make my province proud and to be the very first francophone to own a Drag Superstar title. Dreams DO come true!”

Scarlett Bobo created and produces Empire’s Ball, a drag competition that’s also a platform to inspire the younger generation of queer youth and to address community needs. “I love, love, LOVE doing drag because it allows me to live my truth every day and there are no rules to what I am allowed to do, say, or accomplish. Canada’s Drag Race lets me express every side of myself and show others how to be fearless and authentic. I want to prove that you can stay true to who you are, no matter what.”

Tynomi is known as the Dancing Queen of Toronto and she is one of the most celebrated drag queens in the city. “Tynomi Banks is fun, flirty, and fashionable. She will entertain you, all the while stealing your man in plain sight and you won’t even realize it’s happening.”