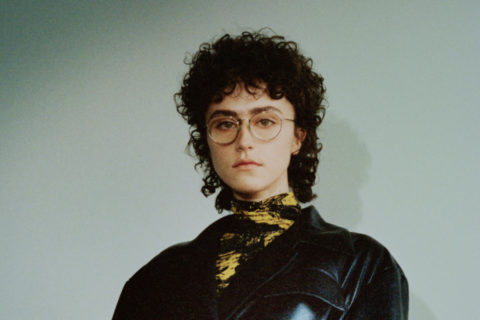 Less than three weeks after signing with IMG Models (and no more than a month after winning hearts as “the first daughter of Bushwick” at the U.S. presidential inauguration), Ella Emhoff made her New York Fashion Week debut. The stepdaughter of U.S. Vice-President Kamala Harris appeared in Proenza Schouler’s fall 2021 digital presentation on February 18, modelling a variety of coats including a belted leather trench fit for a Matrix reboot.

Emhoff stole the show — and signalled a welcome shift away from the overt displays of wealth of the previous administration — when she walked the steps of the Capitol on January 20 in another memorable coat, a bedazzled Miu Miu topper with a cheeky exaggerated collar. The 22-year-old New York City-based design student wore the plaid outerwear over a merlot Batsheva dress, her curly mullet held back with a simple black leather headband. (IMG, the agency that represents both Gigi and Bella Hadid, also took notice of Youth Poet Laureate Amanda Gorman on inauguration day; news of Gorman signing with the agency came just days before Emhoff’s.)

In addition to appearing in the short film showcasing Proenza Schouler’s latest line, Emhoff models several fall 2021 looks in the accompanying lookbook, including a fur-trimmed grey coat and tailored black suit described by the designers as part of a “complete wardrobe created to comfort, inspire, and empower the modern-day woman.”

Harris’s stepdaughter is an up-and-coming designer herself, studying textiles with a focus on knitwear at New York City’s Parsons School of Design. Her Instagram account showcases her quirky, colourful knits and decidedly non-Washington aesthetic.