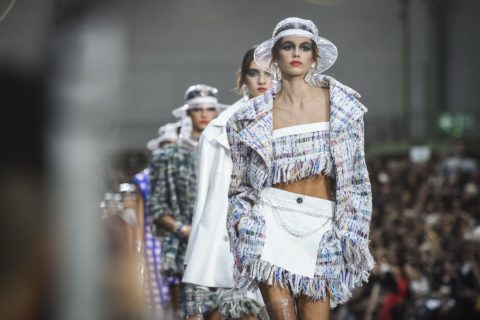 The glamorous world of jet setting models, global runway shows and picture-perfect Instagrams can inspire jealousy in just about anyone. But Elizabeth Peyton-Jones wants us to understand that behind these illusions, there can be harsh realities. Modelling isn’t always glamorous and in an industry teeming with the young and vulnerable, it’s important to provide protection. Peyton-Jones created the Responsible Trust for Models three years ago to kickstart the journey towards building these safety nets. We got a chance to chat with the activist–in town to speak at Toronto Fashion Week–about the organization’s journey so far.

Call to action, link in our bio to sign our manifesto☝? #CareerWithoutFear

With the Responsible Trust for Models, you want to provide a safety net against abuse. What types of abuse are you talking about?

When I started this three years ago, people didn’t really talk about abuse in the industry. You know, models were seen as very, very lucky. It was like, ‘What do they have to worry about? They’re beautiful, they’re meeting fun people, they’re travelling the world, they get paid a fortune…’ But actually, when I looked into it, what I found was that there was abuse in very subtle ways—which end up actually not being that subtle. They don’t get paid on time, so you get what’s called debt poverty. They could also say, ‘Go and sleep with that person’ or ‘Go hang out with that crowd’. They could push drugs or encourage you to go ahead and drink, even if you’re just 15. From the abuse of power, which we’re now seeing with Weinstein and the #TimesUp movement, to sexual abuse and harassment, there’s some pretty nasty stuff.

This type of work is obviously super important, but why is it important to you specifically?

Because nobody was doing it. It was not a conversation. When I did research and brought my findings to people they said, ‘Yeah, yeah, but they’re very beautiful. Why do you have to worry about them?’ Yes, they’re beautiful kids. Yes, they’re wearing beautiful clothes. But actually, underneath those clothes they may not have eaten for a week, they may not have any money, they may be in debt poverty and they may be enduring sexual abuse. Debt bondage is the definition of modern slavery, so in every sense these children need protecting. Worse still, they are huge influencers, so they’re influencing a generation of children their age who then think that this is normal behaviour. That’s why I became a sort of champion of it, because I thought, my goodness, this is the next generation and we have to be careful.

Talk to me about the Gold Standard Certification, what does it represent?

So the way my standard works is that we create a certification, a code of conduct, over modeling agencies so that everyone knows what good behaviour looks like. It’s a little bit like an organic stamp on food or a free trade system. When you’re a model and you look at an agency, you’ll know that that agency is going to take care of you. You know, they’re not going to make you go nude at a minutes notice, they’re going to pay you on time, when you’re traveling to Japan they will accompany you and ensure that you’re taken care of at the other end. And then the brands can say that when they’re sourcing their models for Prada or Balenciaga or even Zara, they can go to this agency and know that the model they have employed will be taken care of. Because if they collapse on the catwalk due to dehydration, that’s very bad corporate social responsibility.

What would you say is the biggest thing that needs to change in the fashion industry today?

I think that the transparency needs to change. It’s been very closed and it’s been allowed to function without spotlight, which is why abuse has happened. That’s why I think the standard is good because it’s audited twice a year and audited independently, so I’m a neutral body. I think that once that changes, a lot of other things will change. It’s like a domino effect.

“By the time these kids are 16, they’re so desperate to do the job that they’ll pretty much do anything. And we’ve really got to question, why are people so fascinated by 16-year olds? 18-year olds are perfectly old enough and they’re already selling 30-year old clothes. It’s crazy in every sense.” – Elizabeth Peyton-Jones

You’ve talked a lot about age and how the models coming up in this industry are really just kids. Would you suggest age limits placed on the industry?

Yes, I mean this is an industry discussion. I think 16 is too young to be asked to walk into an adult environment and be responsible for contracting and influencing and sound biting. And you know, a 16 year old has sometimes been scouted at 12. When they’re scouted an agency will say, ‘Oh, you’re beautiful. We’ll keep an eye on you until you’re 16.’ So you get these 13, 14 years olds trying to up their Instagram, posting nude shots, wearing loads of makeup, going out late, trying to look sexy on social media and they’re not completing their childhood. You shouldn’t have all of those responsibilities when you’re that young and you certainly shouldn’t be thinking about your body image and being rated at that age. By the time these kids are 16, they’re so desperate to do the job that they’ll pretty much do anything. And we’ve really got to question, why are people so fascinated by 16-year olds? 18-year olds are perfectly old enough and they’re already selling 30-year old clothes. It’s crazy in every sense.

Do you think the industry has gotten better or worse over the past few years?

I think the fact that abuse still happens means that it’s not good and I think that if it’s not good, it doesn’t matter if it’s improved. It hasn’t improved enough. Social media has changed everything. We might have improved in one area but another area has completely opened up to allow abuse. So now we have human trafficking and sex trafficking and the industry is becoming a lure for people to traffic. Anyone can become a modeling agent. Anybody in a mall, in a café, on the street can say, ‘Come with me, I’ll make you famous, you’re beautiful’ and before you know it you’re in the back of a van being sold for sex. Is it the fault of the industry? No. But can the industry help do something about it? Absolutely. They can safe guard their part of that problem and right now they’re not doing that.

You’re still a young organization, but what have the past couple of years looked like? Has it been difficult to get agencies etc. to participate or has there been a lot of support right off the back?

Yeah, it’s been very hard. Nobody likes to be shone a light on, especially because they feel they’re going to be blamed or shamed. There has been layers of conversation. It starts off with people immediately thinking they’ve done something wrong. But it’s like, when you give to an animal charity, you’re not doing that because you abuse animals, you do it because you want to safe guard it. Eventually, modeling agencies realize that there’s an issue in the industry and that if there is a standard there, they can make themselves transparent and be the good guys, so they quite like that. Those are the kind of conversations we’ve been having. As you can imagine, they’re quite long because there’s a lot of people involved: models, modeling agencies, brands, publishers, advertisers, retailers. So the system is a big one.

I’m sure you heard about the recent comments Kendall Jenner made. She said, “I was never one of those girls who would do like 30 shows a season or whatever the f*ck those girls do.” There was a lot of backlash and a lot of models saying that they don’t have a choice but to walk 60 or 70 shows a season to pay their bills. Do you have any thoughts on that?

That’s exactly my point about modern slavery and debt bondage. These kids get into these jobs and just keep working and working and working. So yes, if you’re Kendall Jenner and you have background, you know… you’re a young girl and you’re privileged and you’ve got into this job and are now what is considered to be the standard model. But actually, what this shows very clearly is that yes, the lure of fashion modeling is so intense, but it’s luring in people who have nothing and who want a better life. And yet, you’ll see that the models who really make it are those that have background, have money and have influence already. And the ones that come from poverty? Very few survive. You think modeling is going to be a level playing field that gives the poorest of the poor an opportunity, but in fact, it’s an elitist type of profession and it makes the poor poorer. Not only that, but it can get them involved with mental health issues, abuse, prostitution and all of the other really nasty things that you don’t want children from any country to get into.

Yeah it’s like everyone thinking Kendall Jenner is the rule, but she’s actually the exception.

So you’re here in the city to talk about your organization at Toronto Fashion Week.

Yes. It’s about engaging the audience in a conversation that may initially be a bit uncomfortable, but it’s about bringing awareness to a situation that needs it.  A lot of the people in the audience will have children who are probably aspiring to be models–and it’s okay to want to be that–but right now we have an issue in the industry. So let’s deal with it and make it better so that if they do pursue it, there’s a safety net. Don’t get me wrong, I don’t want to take all the glamour out of it, I mean I love fashion, but it’s just not as glamorous as we think.