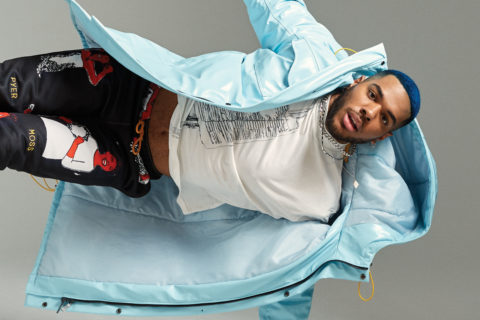 A social media sensation kicks up his heels— and turns fashion conventions on their side.

Donté Colley has more than 800,000 Instagram followers, many of whom undoubtedly aspire to his level of intensity and eclecticism in their own dress. Yet the plucky digital creative has an interesting perspective on the phenomenon of influencing. “Everybody’s journey is different,” he says. “You don’t have to cookie-cut yourself into something you see online that’s getting a lot of likes or comments or positive feedback.”

Colley launched his career with a series of amusing motivational dance videos, some of which were filmed in Aritzia’s stockroom, where he worked. But his relationship with style started way back, thanks to his mother, Leeanne, a manicurist and salon owner who sometimes took him along on her editorial jobs. “I remember one shoot [with] Coco Rocha,” he says. “I couldn’t believe the process of doing hair, makeup and manicure and then getting the shot. I was so inspired.” His mother’s fashion savvy also meant that Colley always looked fabulous, even from day one. “I was looking at baby pictures a few weekends ago,” he says, “and I was like, ‘Wow, why don’t I have this outfit now?’”

As he began to explore fashion further, Colley turned to Value Village. “In the mall, I couldn’t find what really resonated with who I was,” he recalls. And then he discovered another benefit to these shopping expeditions. “They are also a tool [that helps me] deal with my mental health,” he says, talking about how moments when he’s feeling anxious or sad can be turned around with a thrifting trip. “There is something about it that helps you take your mind off things a little; it’s calming, almost like meditation.”

“You don’t have to cookie-cut yourself into something you see online that’s getting a lot of likes or comments or positive feedback.”

Today, Colley applauds brands like Dior and Louis Vuitton for their increasingly inclusive and novel mens- wear collections, and he hopes that the shift continues when it comes to stylistic stereotypes. “I feel that before—rewinding to five years ago—dressing in women’s clothing wasn’t acceptable, especially for a black male,” he says. “A lot of the shopping I do is in the women’s section. Honestly, it doesn’t matter where you shop as long as [the clothing] speaks to you.”