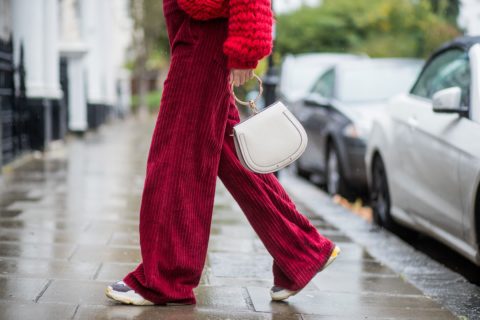 Will the Rise of Corduroy Mark the Fall of Athleisure?

“What corduroy can bring to athleisure is the idea of looking stylish but still wearing something you can feel comfortable in.”

The year 2017 has been about embracing inclusivity, and no fabric has been more of an “outsider” than corduroy. This ribbed take on velvet has long been a favourite of sartorially clueless nerds and intellectuals. (The geeky kids of Judd Apatow’s Freaks and Geeks come to mind.) But with its recent runway comeback, corduroy is poised to surpass athleisure’s Lycra as the fabric du jour.

With its roots going back to 200 BC, modern corduroy reached the mainstream in late-18th-century England when it was used to make durable uniforms for the working class, earning the nickname “Manchester cloth” after the northern city where it was manufactured. It gained popularity as a fashion fabric in the 1960s and ’70s and was adopted by actors and musicians like Jimi Hendrix, Bob Dylan and Diane Keaton before becoming a staple of ’80s academia via Ivy League stars like Harold Bloom and Jacques Derrida. In the ’90s, corduroy resurfaced alongside plaid flannel shirts as a thrift store favourite of the grunge era and was worn by reluctant icons of cool Kurt Cobain and Eddie Vedder.

This season’s runway versions of the material are a nod to its past incarnations while elevating the fabric to new extremes. Worn by Gigi Hadid and Zayn Malik in Vogue’s August 2017 cover story, Prada’s androgynous corduroy suits flare out in classic ’70s fashion, while Balenciaga’s emerald corduroy trench coat endows the fabric with an unexpected allure. At Gucci, Alessandro Michele took his magic wand to the fabric, coating a classic blue corduroy blazer and orange corduroy slacks with a psychedelic explosion of flowers.

Stockholm-based The Cords & Co, which recently opened stores in New York and Los Angeles, lays claim to being the first corduroy-focused brand. “We realized that there was corduroy in the marketplace, but nobody had taken ownership of it,” says CEO Omar Varts. “We’re using it to experiment with silhouettes that we all know and love, like hoodies and T-shirts. It’s taking ideas that have been in the market and re-appropriating them into a corduroy context.”

At her boutique Ease on Toronto’s Dundas West, owner Zai Rajkotwala has added the material to her thoughtful racks with suits by Houston- and Copenhagen-based brand Mr. Larkin. “They are doing some amazing colours and shapes with cords for fall,” says Rajkotwala, singing the fabric’s praises. “It deepens colours, it feels good against skin, it doesn’t wrinkle, it’s great for layering and it’s so versatile and transitional.”

It’s this comfort and versatility combined with an effortless sophistication that makes the fabric poised to shift our sartorial eye away from form-fitting leggings and back toward a more elegantly tailored silhouette. “What corduroy can bring to athleisure is the idea of looking stylish but still wearing something you can feel comfortable in,” says Varts. Call it the revenge of the nerds.