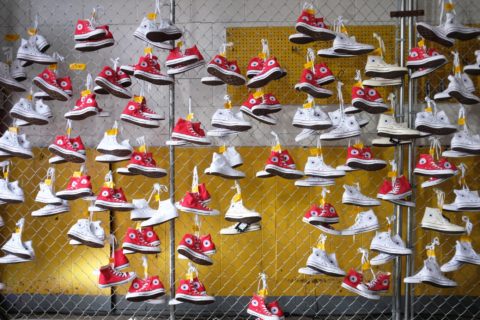 If you’re wondering why you saw shoes  hanging on several bus shelters on last Friday’s morning commute, you can thank Converse for this one. It’s all a part of the new campaign “All The Stories Are True” which kicks off with an installation piece along Queen Street West.

At a private launch party this week, there was a fenced wall of full of red and white Converse sneakers. Attendees were invited to grab a pair and head to customization stations, where buttons, embossed phrases, and colored laces could be added on. And if you needed customization inspiration, the event space, a former garage, was there to help as it was adorned with various art installations, including several hanging rolls of yellow duct tape and fridges covered fully in cartoon stickers.

Converse is one of those classic brands that has managed to maintain relevancy across generations and regions. They’re also about individuality and personalization, which is why this Toronto project is an interesting addition to the bustle and color of Queen West. Those who do dare to take a pair of Chucks (yes, you can actually take a pair) will have an interesting story to share.

The Converse drops on the bus shelters will continue through to the 20th. Grab a pair while you can.

IMAGE COURTESY OF CONVERSE.
Get the best of FASHION in your inbox Thanks for signing up!
The latest fashion, beauty and celeb news delivered right to your email #FASHIONforall Now, check your inbox to complete your subscription
We won’t ever use your email address for anything else
Want even more FASHION? Follow us on social media.