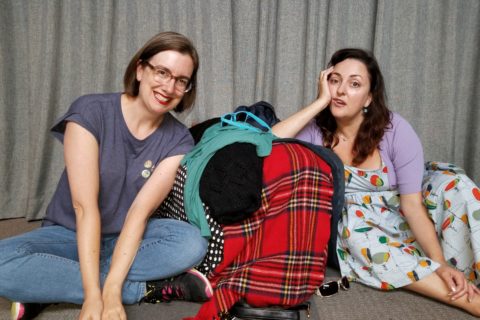 "Swapping really does span all different socio-economic and cultural gaps, which is one of the things that's most fulfilling about it."

Amanda Barker and Dale Boyer, the longtime friends behind the inventive new play/clothing swap fittingly titled Clotheswap, have had their own Sisterhood of the Travelling Pants moment. In the 15+ years that they’ve been attending swaps together, Barker has amassed almost all of Boyer’s jeans. “The first swap that she ever had I couldn’t believe it, you know we’re not the same body type, but if Sisterhood of the Travelling Pants taught us anything, it’s that everybody can wear the same jeans,” says Barker.

It makes sense, considering their long history of hosting and attending clothing swaps, that the two writers/comedians would weave those shared experiences into a part-scripted, part-improvised theatrical performance that is currently underway at Toronto’s Fringe Festival. Earlier this week, I made my way to The Textile Museum of Canada for an afternoon performance of the show, which sees Erin (Cassie Cao), Krimp (Ashley Comeau), Geri (Tarah Consoli), and Brenda (Amanda Barker) convening in Renata’s (Karen Parker) dead grandmother’s home for a clothes swap. All sorts of insecurities, flaws, and pent-up feelings are revealed over the course of the show, the narrative script making you feel as though you’re listening in on a conversation amongst friends, while the skillfully executed improvisation opens the story up to the audience. Audience members are encouraged to bring their own clothing to be used during the performance, and participate in a real-life clothing swap after the show. The remaining pieces are donated to local charities such as Sistering and Dress for Success.

The first time Boyer and Barker saw each other was at a previous Toronto Fringe Festival back in 2002, however, they didn’t actually meet until 2003. After being cast together in “Tony N’ Tina’s Wedding” at The Second City, they started their own sketch troupe called “Shame is Right!”. Since then, they’ve worked together on countless projects, such as 2015’s Home for the Holidays with Jann Arden.

When the idea for Clotheswap started to form, Boyer says she and Barker didn’t see themselves in any of the roles. “It’s funny, we wrote this show and we actually didn’t envision ourselves within it at all. But it was really important for us to create, as best we could in 90 minutes anyway, fully fleshed women who were contradictory, even within themselves.” 76% of the people working in the garment industry are female, says Barker, and so the show is as much about the narrative of the clothing itself as the narrative of the women wearing it, driving home the point that this is very much a woman’s story to tell.

The story also comes from a deeply personal place, seeing as clothing swaps have long been a big part of both Barker and Boyer’s lives. “Probably as long as we’ve known each other we’ve been doing clothes swaps, and we kind of have a core group that do them now,” says Boyer, at whose home Barker attended her first-ever swap, back in 2002 or 2003. Since then, the women have been to countless more swaps, all of which have been organized a bit differently. “The last swap I went to actually was a very painstaking process of one piece at a time—honestly it was about an 8-hour swap,” says Barker. Others might allow ‘battles’ (where one swapper has to prove to another why she or he deserves that particular garment), and some might just be a complete free-for-all.

Clotheswap shows women of all different backgrounds, professions, and sizes coming together to swap their clothing, which is indicative of how clothing swaps work in real life. Diversity and inclusivity were a huge influence for the script, Barker explains, because it’s what they love the most about their own swaps, which she describes as “some of our most fulfilling times to get together as women, because it’s not just within an insular group. Swapping really does span all different socio-economic and cultural gaps.” Clothing swaps also bring up conversations about life, memories, attachment and body image, which aren’t female-specific, which is why Barker hopes to encourage more men to get involved as well. “This story is also about all the non-female identifying people in our lives. For us, we want men to swap, we want non-female identifiers to swap, because fabric is for everyone.”

Aside from the personal and emotional elements of a clothing swap, there’s a sustainable and eco-conscious angle to them as well. “For the last four years we’ve been studying the effects of fast fashion, how it obviously affects the world but also our day to day,” says Barker. According to her research, 86% of donated garments end up in landfills because people are giving away unwanted stained, ripped, or smelly clothing. “The textile industry in Kenya, which was once one of their most thriving and vibrant industries, no longer exists because of our donations of fast fashion.” These days, a lot of textiles can’t be recycled because they’re frequently blended with synthetic fibres, making it virtually impossible to separate one from the other.

While Barker describes herself as “not a hoarder, but close,” Boyer considers herself a “deep swapper,” rarely keeping clothing for more than a season. “The funny thing is that I have more fabulous, wonderful clothes than I have ever had in my life. When you’re not holding on to something, that’s when things show up for me.”

Photography Courtesy of Bryan Cacciatore
Get the best of FASHION in your inbox Thanks for signing up!
The latest fashion, beauty and celeb news delivered right to your email #FASHIONforall Now, check your inbox to complete your subscription
We won’t ever use your email address for anything else
Want even more FASHION? Follow us on social media.