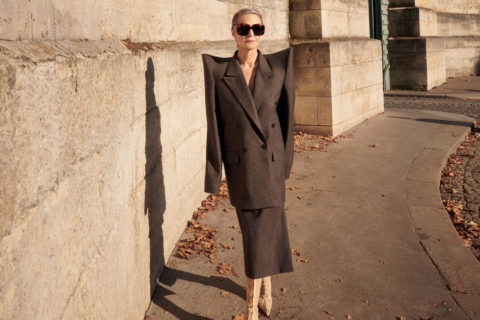 Charlotte Rampling picks up the phone at her home in Paris after two rings, and even her upbeat “How are you?” suggests a smile. The chuckles and giggles are so frequent during our hour-plus chat that if they were spliced together, the result could be a laugh track for a Saturday Night Live sketch. Which is surprising, because of all the things the 74-year-old actress is known for, giddiness isn’t one of them.

With more than 100 film performances, Rampling has been called icy, imperious and aloof. The characters she is best known for are troubled in one way or another: the institutionalized ex-girlfriend in Woody Allen’s Stardust Memories, the deluded wife of a missing husband in François Ozon’s Under the Sand and a concentration camp survivor who has a sado-masochistic affair with the Nazi officer who raped and abused her in Liliana Cavani’s The Night Porter. Referring to one of her very first films, the 1966 hit Georgy Girl, critic Peter Sobczynski later wrote that “she captures the dark flip side to the carefree Swinging Sixties era…to almost terrifying effect.”

When she finally does play someone who’s got it all together — the psychiatrist Dr. Evelyn Vogel in the Showtime series Dexter — Rampling still keeps us on edge as she stealthily navigates her complex relationship with the psychopath played by Michael C. Hall.

Rampling’s next turn is in Denis Villeneuve’s Dune, which has been pushed to an October 2021 release. But if the trailer is any indication, she will be no less compelling. She is a highlight of the three-minute preview in which she orders a boyish Timothée Chalamet to choose between pain and death.

Her method, she says, is no method. “I don’t really prepare in terms of thinking what I’m going to do,” she explains in a friendly, lyrical tone. “I understand what the scene is about by reading it, and I integrate it and learn what I am going to be saying. I’ve always worked this way. I’m a naturalist, and I don’t want to fake anything. I trust my feelings — I’ve got many of them — and I know they’ll come up when I need them.”

Rampling refers to herself as “a very complicated person inside” and then adds: “But when I’m out there doing things, I’m very natural. It surprises many people because some of the roles I’ve played are quite dark, but that’s all part of my inner world. That’s what an actor plays with — the shadow side of themself.”

Her naturalness, combined with a Hatha yoga-toned frame, point-blank gaze and lack of inhibition, has also made her a favourite subject of the fashion set. Marc Jacobs’s Fall 2011 collection for Louis Vuitton was inspired by Rampling’s attire in The Night Porter. Jonathan Anderson cast her in a book for Loewe’s Spring 2017 collection. And Rampling gives Jacobs an acting class in a highly amusing video for Givenchy’s Spring 2020 campaign. Jacobs’s performance is cringeworthy, but, she insists: “He was faking being a bad actor. That whole thing was camped up. And he doesn’t want to be an actor — though he thought he did at one time.”

One of her most notable fashion shoots was with Juergen Teller at the Hôtel de Crillon in Paris for Jacobs’s Spring 2004 campaign. In one series of images, the photographer cavorts nude on a grand piano while Rampling plays. Five years later, Rampling (then 63) and model Raquel Zimmermann posed naked for Teller in front of the Mona Lisa. “People might say the pictures we did together are strange and weird,” says Rampling. “But there was nothing perverse; it was all done in an open, loving way — like kids playing. That’s what we tap into when we are performing and making teams and imagining these other people. It’s very much like playing ‘let’s pretend’ when we were kids,” she says, giggling.

The iconic nude that Helmut Newton took of Rampling in Arles, France, also came about spontaneously. She had been asked to pose for Playboy by the production company for the John Boorman film Zardoz, which she was promoting. She suggested they hire “a modern photographer who would do stylish things and not just silly Playboy things.” So they found Newton, who was already known as a fashion photographer but hadn’t done nudes. After the Playboy shots were done, Newton proposed they move to a richly decorated hotel to do some images for themselves. “Just a half an hour and we’ll do what you feel comfortable with and just click-click; if you don’t like them, we can dump them,” Rampling recalls Newton saying. “I’d gotten on well with him, and I thought, ‘What is there to lose?’ So we went and did them very quickly. We were really just having fun. When I see how much that photo has pleased people over the years, I’m really happy because it was done so naturally. So much work is done under a lot of pressure and pain that to get something natural is really quite difficult. But this was a magic moment.”

Rampling was born in Sturmer, England, to a manufacturing heiress and a British army officer who had won an Olympic gold medal in track. She was educated at private schools in England and Versailles and was working in a typing pool at an ad agency when executives cast her in a Cadbury commercial. Things snowballed from there. Rampling says that she has never actively searched for work; it has always come to her. She feels that coming of age in the freewheeling ’60s had something to do with how things unfolded.

“There were no restrictions,” she says. “Just walking down the street, I was spotted and someone put me in a small film. It so happened that that film went to Cannes and won the Palme d’Or.” The movie was the 1965 comedy The Knack…and How to Get It, which also launched the careers of Jane Birkin and Jacqueline Bisset. “Everything could be an accident in that way,” she adds. “People say I’m so lucky, and I say it was the time. I was there in the right place at the right time, and I had the right face and could do the job well.”

Those early years were marred by tragedy, though. Her sister, Sarah, took her own life when Rampling was 20. For years, her father led the family to believe that Sarah had died of a brain hemorrhage, fearing his wife wouldn’t be able to cope. As it was, she suffered a stroke not long after her daughter’s death.

Rampling went through her own depression in her 40s, telling The Sunday Times Magazine: “It’s a dark, dark sickness. You just live with your time and try to work out as well as you can how the f*ck you survive in it.”

Around the same time, her ex-husband Jean-Michel Jarre introduced her to the mostly black designs of Yohji Yamamoto, which would become the core of her fashion uniform. “The clothes really suited the moods I was going through,” she explains. She has since amassed “a huge amount of vintage Yohji.” “I still do like it, and I still almost always dress in black and white,” she adds. She also likes Y’s and supple black jersey Agnès B pants. But her footwear is strictly black lace-ups by Church’s. “I have two pairs, and they’re very old – 20 years, I think,” she says. “I’ve had them remade and even remodelled because they didn’t do that model anymore. They are absolutely amazing. I wear them barefoot. I have other lace-up shoes that I don’t really wear because they are not anything like what these are. These are beautifully made and have moulded to my feet. And like the Yohji jackets, they will probably last forever.”

Rampling has little desire to shop now, she says, and is quite happy to stick with her old favourites. “I think a lot of people will be getting into this way of life because there is something very sensual and personal and intimate about having clothes that become you,” she says. “They are part of the way you walk, the way you move and lounge around. You know how to be in them, so you can put them on and know you are going to look just the way you want to look. You don’t feel the clothes on you anymore, which is a really good feeling.”

Rampling has projects on the horizon, though she admits: “Quite often, I say to myself, ‘Do I really want to carry on making films?’ And then some brilliant script will pop up.” Otherwise, she enjoys biking around Paris and going out to dine and see films (when the city is not in lockdown). She lost her partner, French businessman Jean-Noël Tassez, in 2015 and has grown children — Barnaby Southcombe, a director, and David Jarre, a musician and magician — from her two marriages.

And given the fact that her father lived to be 100, Rampling still might have a lot of runway left. But unlike many public figures of her vintage (she is the same age as Cher), she isn’t into “cosmetic enhancements” to turn back the clock. “I did a bit but very little — like putting collagen in the lines — and nothing really changed my face so I ended up not doing it anymore,” she says. “And I couldn’t face going into surgery and coming out and looking at my face. What would I see? Probably a cleaner face with the lines wiped out. But I wouldn’t be seeing myself. I just couldn’t comprehend that. Whatever happens, I will carry on with my face as it is. But it hasn’t worked out too badly,” she adds, laughing yet again.