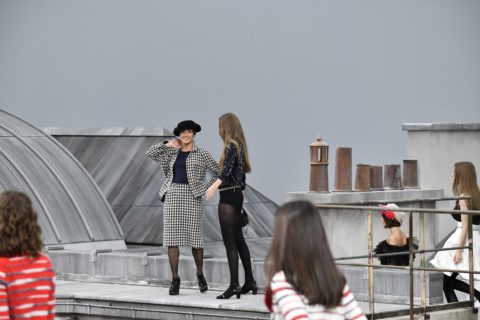 "Her presence on the catwalk was not planned," confirmed Chanel.

As the models were taking their final lap around the Paris rooftop set at Chanel’s S/S ’20 show at the Grand Palais, a woman from the audience hopped up from her seat and joined the procession. Dressed in a black-and-white tweed suit with a black hat, the runway crasher blended into the rest of the lineup so seamlessly that security guards had a hard time figuring out who the interloper was in the lineup of dozens of women.

Someone stormed the runway finale and joined the models @CHANEL watch! #pfw pic.twitter.com/Wp4L3yEccP

Without any guards around to immediately intervene, Gigi Hadid decided to take matters into her own hands, confronting the unwanted model and escorting her swiftly off the runway.

#GigiHadid saves the #Chanel show from rogue French comedian and performer #MarieSinfiltre who crashed the runway during the finale of the #spring2020 collection in Paris. ? @shannonadducci

The crasher, it turns out, is Marie Benoliel, a comedian and YouTube personality with 198,000 followers on Instagram under the stage name Marie S’Infiltre. The comedian has a one-woman show on now at the Comédie des Champs Elysées theatre in Paris but somehow found the time to crash another runway last week, joining the Etam show wearing silvery lingerie and a sleeping mask. According to Vogue, “she even hired a fake bodyguard and driver to escort her around that day while pretending to be an influencer.”

As noted by CNN, “the comedian, whose stage name translates to “Marie inserts herself,” has almost 230,000 subscribers on YouTube. For one video, she attended a gilets jaunes protest wearing a mask of French president Emmanuel Macron; in another, she interviewed supporters of far-right former presidential candidate Marine Le Pen at a National Front rally, posing as a Le Pen supporter. In 2017, she crashed the Cannes Film Festival red carpet, with the words “seeking role” and a phone number written on her back.”

In a statement released five hours after the show, Chanel said: “This person is a comedian known for this type of prank. She had crashed another runway recently. Her presence on the catwalk was not planned. Security guards simply led her to the exit at the end of the show.”

Photo by Victor VIRGILE/Gamma-Rapho via Getty Images
Get the best of FASHION in your inbox Thanks for signing up!
The latest fashion, beauty and celeb news delivered right to your email #FASHIONforall Now, check your inbox to complete your subscription
We won’t ever use your email address for anything else
Want even more FASHION? Follow us on social media.