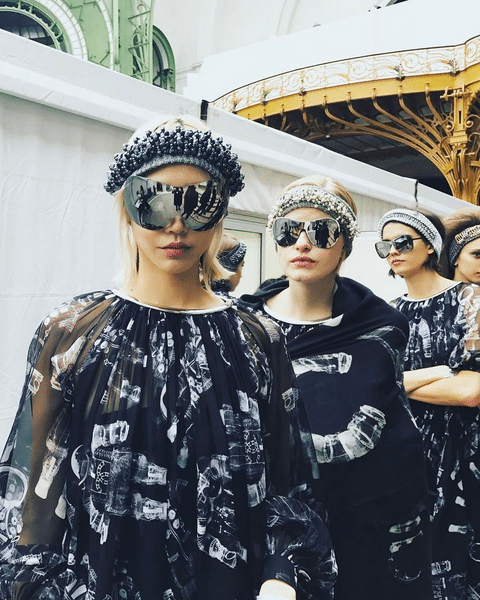 From Fall 2010’s artisanal iceberg imported from Sweden to Fall 2014’s fully stocked grocery store (complete with Chanel branded milk and all), Karl Lagerfeld ups the wow factor season after season. Even now in his 80s, the legendary designer knows how to create a product that is out of this world. And that’s exactly what the French luxury house did today for its fall 2017 show at the Grand Palais during Paris fashion week.

Lagerfeld projected Chanel into space with a 60s futuristic twist. “It’s a journey through the sky, to the heart of constellations, in the wake of the astronaut Thomas Pesquet,” said Lagerfeld. Silver played a starring role, splashed on everything from quilted capelets to fingerless gloves. Bubbling vinyl tops were paired with long rocket-style skirts, and the collars of jackets and dresses were high, round and rigid. The later accent had Jackie Kennedy throwback vibes mashed up with NASA space suits. Crystal embroidery and sequins twinkled like stars, and the minaudières resembled tiny rocket ships and planets. The back-to-the-future beauty message was Barbarella (or Chanel-arella) with hair styled high into bouffants, topped off with hair bands.

Celebs were out in full force, with Pharrell Williams, Cara Delevingne and Lily-Rose Depp (three of the house’s ambassadors) causing a flashbulb frenzy in the front row.

But the real ta-da moment of this interstellar journey occurred during the show’s finale, when the 37 meter-high rocket (part of the elaborate set décor) actually blasted off in the Grand Palais.

There was a countdown, then the engines began to fire (the effects of the sparks are way cool), and then it happened—Paris, we have lift off! As the rocket climbed, Elton John’s hit song Rocket Man played in the background. Watch the videos below to experience the Chanel magic.

Back on earth, we’re still dreaming about this awesome space-age show. Is there life on Mars? We don’t know. Is there Chanel on Mars? Karl Lagerfeld might just have the answer.