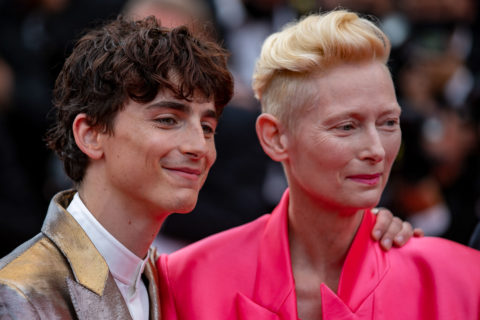 The Cannes premiere of Wes Anderson’s 'The French Dispatch' was a truly eclectic and fashionable affair for the platonic pair.

The internet loves nothing more than an affectionate and platonic duo — it’s what feeds the incessant chatter on Twitter, the carousels of Instagram and the many, many interview montages scattered across YouTube. Previous additions to the “Internet Obsession Hall of Fame” include Emma Stone and Ryan Gosling, Anthony Mackie and Sebastian Stan, and Zendaya and Tom Holland (who are now reportedly dating). The July 12 premiere of Wes Anderson’s The French Dispatch at the 2021 Cannes Film Festival marked the induction of social media’s new favourite non-couple: Timothée Chalamet and Tilda Swinton.

Co-stars Timothée Chalamet and Tilda Swinton arrived at Cannes in a series of complimentary outfits that shone individually but positively dazzled together. At the film’s screening, Chalamet’s silver Tom Ford suit punctuated by white accents was a nod to the decadence of ’80s glamour. Swinton chose a cropped, pink satin bolero blazer and top with an orange floor-length skirt by frequent collaborator Haider Ackermann. Never one to miss an opportunity for theatrical flair, Swinton added green sequin sleeves.

Yes, the fashion was fabulous. Yes, we love all the androgynous fashion moments Chalamet and Swinton have given us over the years. But what made this Cannes red carpet so special was the photos that came out of it. These two are so clearly fans of each other that it’s hard not to be charmed by their mutual adoration. And the handholding, head resting and swoon-worthy smiles just kept coming as the festival progressed.

At a Cannes photo call for The French Dispatch a day later, Chalamet and Swinton once again showcased their A+ style and proved that opposites really do attract. In his trademark effortlessly cool aesthetic, the actor wore slouchy pants tucked into chunky boots and a blush T-shirt from cult brand Elara. Swinton took a very different approach and wore a striking blue suit, again by Haider Ackermann, further cementing her status as a fashion icon.

As for the rest of The French Dispatch crew, filmmaker Wes Anderson and crowd favourite Bill Murray also had their own delightful red carpet moments (minus the handholding). While Anderson opted for a seersucker pastel suit, Murray looked like he was ready for a Hawaiian vacation. Between the chaotically printed short-sleeved button-down, baby blue shorts, and Fedora, these co-stars were quite the eclectic bunch.

As seen with the fashion from the stars of The French Dispatch, the film festival’s red carpet has gotten a bit of a refresh this year. The Cannes aesthetic is typically characterized by its timeless glamour and couture showpieces (think Amal Clooney wearing Atelier Versace in 2016). As new and renowned stars come to debut their latest films, glitzy gowns and luxe tuxedos reign supreme in a display of opulence and old-timey Hollywood. But just as we saw in Balenciaga’s Fall 2021 couture collection, the future of glamour is being redefined as decidedly more relaxed. Celebs are clearly on board as denim has been a favourite in recent red carpet looks. Most recently, Marion Cotillard wore a floor-length jean dress by Chanel to the De Son Vivant premiere, and both Charlotte Gainsbourg and Jane Birkin wore jeans to the film call for Jane Par Charlotte. While it’s unclear if a casual dress code will continue to work its way through Cannes and the upcoming award season, red carpets have never featured so many diverse looks, and we can’t wait to see what happens next.