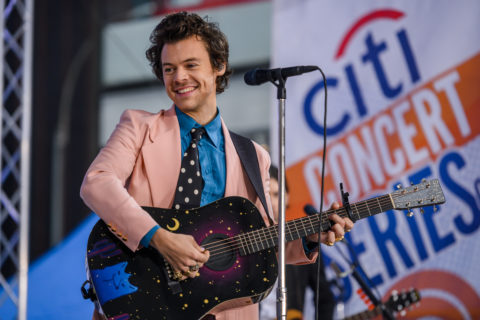 The 10 Celebrities That Influenced Our Style in 2020

Lyst has released its annual Power Dressers list for 2020.

Lyst has released its year in review report for 2020 – and it’s been a year like no other. With lockdowns demarcating much of the year, and retail stores closing and then opening and then closing again, fashion – both the industry and the everyday act of getting dressed – has been turned on its head over the past nine months. But despite living and working at home and ventures outside the house few and far between, our interest in celebrity style has not waned. In the report, Lyst outlines the top 10 Power Dressers of 2020 “whose personal style choices drove the biggest spikes in searches, sales, news coverage and social media mentions over the last 12 months.”

Below, discover our collective celebrity style crushes from the past 12 months below:

Marine Serre’s moon-print is one of the most in-demand prints of the year and that is thanks in large part to Beyoncé. The Grammy Award winner sported a printed catsuit in her Black Is King visual album and within 48 hours, searches for the brand spiked 426 per cent, and more than 3,000 shoppers searched for “crescent moon top” in the days that followed. Additionally, the Alessandra Rich suit she wore in an Instagram post in September prompted a 78 per cent increase in searches week-on-week.

The frontman of K-pop boyband BTS, Kim Namjoon (who is known as RM) is a firm fashion fixture. Earlier this year, his white turtleneck and jacket combination inspired a 67 per cent increase in searches for similar pieces. Following his appearances at the 2020 MTV VMAs in head-to-toe Gucci, searches for Gucci ties surged 28 per cent, and three-piece suits by 12 per cent in the following 24 hours.

Alexandria Ocasio-Cortez has had a few major moments this year, and the red suit she wore to condemn sexism in the US Congress back in July inspired a 74 per cent rise in searches in the days after the speech was televised. AOC also proved her influencer status after showcasing Telfar’s Shopping Bags on Instagram – searches for the brand rose 163 per cent as a result.

When rapper Travis Scott announced in January that he was teaming up with Nike, searches for the brand rose 128 per cent month on month. Lyst also notes that the term “Travis Scott x Nike” also spiked by 168 per cent within 24 hours of the release of the collab. Interestingly, his most recent team-up with McDonald’s helped to boost the company’s quarterly sales.

In addition to Harry Styles and his pearl necklaces, Normal People actor Paul Mescal was also responsible for a surge in interest in men’s jewellery this year. Additionally, his summer wardrobe of short shorts saw searches for the item spike 51 per cent month-on-month and his Louis Vuitton look at the Emmys in September saw searches for the brand increase 44 per cent week-on-week.

Following Lizzo’s appearance in Rihanna’s Savage x Fenty show, searches for blue lingerie spiked by 96 per cent. And after her Grammys performance, searches for neon green bodysuits rose 37 per cent in the 24 hours that followed.

A post shared by Duke and Duchess of Cambridge (@kensingtonroyal)

The Duchess of Cambridge’s fashion influence has remained strong throughout the pandemic. She caused a 185 per cent surge in searches for floral face masks in August, and a 36 per cent increase in searches for striped Breton tops after a virtual appearance on the BBC in April.

Rounding out the top 10 is Italian influencer-turned-businesswoman Chiara Ferragni. Her collab with Champion in April saw a 108 per cent increase in searches for the brand that month, and a number of her at-home style choices – like a Versace bathrobe and Louis Vuitton fur slippers – have also influenced searches in recent months according to the report.

Photo by Nathan Congleton/NBC/NBCU Photo Bank via Getty Images
Get the best of FASHION in your inbox Thanks for signing up!
The latest fashion, beauty and celeb news delivered right to your email #FASHIONforall Now, check your inbox to complete your subscription
We won’t ever use your email address for anything else
Want even more FASHION? Follow us on social media.