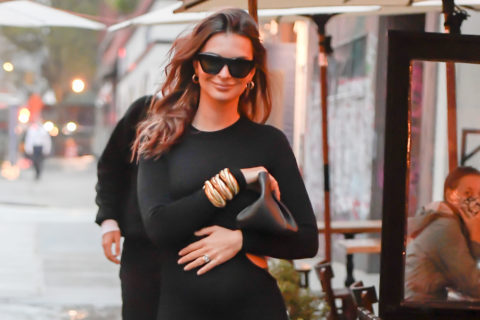 10/11: Emily Ratajkowski continues to prove that her pregnancy style is anything but typical. On her most recent outing to pick up a green juice, Ratajkowski opted for a form-fitting white tee and low-rise jeans that showed off her bump. She finished the look with a white cardi, sneakers and a green face mask.

04/11: Cooler weather in NYC hasn’t stopped Emily Ratajkowski from showcasing yet another cool maternity look. Stepping out to walk her dog with husband Sebastian Bear-McClard, the Inamorata founder opted for a sleek two-tone puffer from The North Face teamed with lightwash denim and sneakers. Her fuzzy white hat was a nice finishing touch, too.

28/10: We knew Emily Ratajkowski was going to perfect pregnancy style from the get-go and the model has put her growing stomach on display for the second day in a row since announcing the news on Monday. Spotted out in NYC today, Ratajkowski let a white button up shirt fall open to highlight her stomach, which she paired with boyfriend jeans, knee-high brown boots, a camel coat and dark sunglasses.

Earlier today the model also shared a series of images on Instagram of her wearing the new range from her swimwear brand Inamorata:

Original (27/10): Yesterday, model Emily Ratajkowski announced she is expecting her first child via a special digital edition Vogue cover and hours later, the mom-to-be was already putting her stellar pregnancy style on display.

Stepping out in New York mere hours after the news broke, Ratajkowski looked thrilled to show off her changing figure (she’s currently 20 weeks along). The model wore the black bodycon “Gigi” midi dress by Aya Muse with cut-out panels at the side which highlighted her growing bump, paired with dark sunglasses, red knee-high boots, chunky gold bracelets and a sizeable black clutch.

To coincide with the announcement, Ratajkowski shared a powerful essay on pregnancy and motherhood with the website. In the piece, she touched on gender stereotypes (“I like the idea of forcing as few gender stereotypes on my child as possible,” she wrote), the pressure of pregnancy reveals, her fears of raising a son (though she doesn’t yet know the gender of her child) in this world and the myriad opinions that you’re bombarded with when carrying a child. She is, however, looking forward to what is to come. “I’m too humbled to have any false notions of control. I’m completely and undeniably helpless when it comes to almost everything surrounding my pregnancy: how my body will change, who my child will be. But I’m surprisingly unbothered. Instead of feeling afraid, I feel a new sense of peace. I’m already learning from this person inside my body. I’m full of wonder.”

We suspect the above is just the start of an epic maternity wardrobe. Stay tuned for more looks.