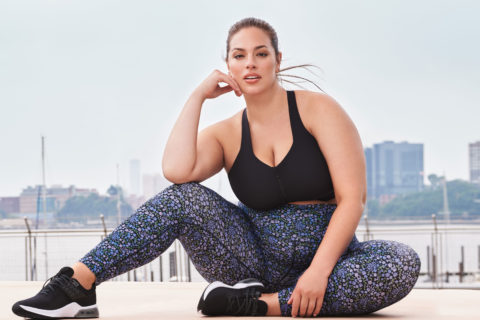 The supermodel is Knix's first-ever global ambassador — and face of their brand-new, 30-piece activewear collection.

It’s fair to say we could all use a bit of a confidence boost. As it turns out, 18 months of binge-drinking, -eating, -watching, and -sitting doesn’t do wonders for your self-esteem. Add being locked inside for much of that time with only your thoughts and a looming pandemic, and many of us are coping with mental and emotional scars.

As we slowly make our re-entry into (hopefully) post-pandemic life, a new form of power dressing has emerged: activewear. Gone are the days of relying on shoulder pads and pinstripes to channel your inner boss lady — comfort-driven dressing has become a work-from-home staple (thanks, Zoom calls!) and an unexpected source of empowerment.

The most recent addition to the activewear category is Knix Active, an assortment of workout-ready gear from Knix that includes their iconic leakproof technology (hello, period-ready leggings and biker shorts!). And the Canadian brand that started with intimates has partnered with a bona fide fashion world powerhouse to launch the 30-piece collection: supermodel, entrepreneur and mother Ashley Graham. As Knix’s first global ambassador, the activist will now be the face of campaigns, collaborate on future collections, and participate in brand initiatives such as the Life After Birth Project, which highlights birthing people’s postpartum journeys.

While technological innovations in fabrics, cooler silhouettes (hi, matching sets!) and the ever-popular athleisure trend have contributed to activewear’s popularity, the body-positivity movement has been fundamental to its success. As brands like Ivy Park, Savage x Fenty and Girlfriend Collective began embracing real bodies, the effect on social media was instantaneous. Many women who had often felt excluded from the athletic narrative were not only being included, but celebrated. This inclusive ethos has been embraced by Knix since its inception.

And although it’s the label’s first full collection of activewear, founder and CEO Joanna Griffiths says it’s something she’s always wanted to explore, testing the waters with the wildly popular Catalyst sports bra.

“When I first started Knix, we had the idea to launch with leakproof underwear. One of the main reasons people needed this product was for when they were active, so I always knew that Knix and active were kind of synonymous with one another,” says Griffiths over Zoom. “And then we made our sports bra, which was two years in the making, and the design brief was literally, ‘when people see this sports bra, I want them to feel like they’ve had that Nokia phone and they’ve just seen the iPhone for the first time.’ We wanted to change the game, and then we did.”

Graham credits that very sports bra for making her a Knix fan for life and motivating her to become an investor in the brand.

“I’ve been a customer for a couple of years now, and it all started with the high impact Catalyst sports bra [that Griffiths mentioned]. I purchased it — it was #notpaid — and it just literally contained my boobs so well! It didn’t give me a uni-boob or quad-boob — it was super easy to put on and also take off,” Graham says with a smile over video chat. “So I posted it [on social media], then Joanna and I started talking on DM. We quickly realized how much we actually had in common and how we want to change the industry. So that’s really where it all began. Plus, I love Canadians!”

It might come as no great surprise that Graham’s previous experiences shopping for size-inclusive activewear have been less than ideal. While the body positivity movement has gained traction in recent years, many brands still cater to a minimal size range.

“I think being a curvier woman, in general, makes it really difficult to find clothes that fit you the way that you want to appear,” says Graham, citing she’s often “on the hunt” for apparel that fits her body type.

For Griffiths, it was never even a question that Knix Active would be size-inclusive. The debut collection, which includes Go with the Flow ️ leggings and shorts, seamless bras, and high-rise bike shorts, is available in sizes XS to XXXXL and is designed to fit bra sizes 28-44 and cups A to H.

And Griffiths says they’re just getting started when it comes to size inclusivity. “I’ll be honest with you — we still have work to do. I always say, the expansion of our size range is never done, and we’re constantly adding new sizes,” admits Griffiths. “But I think it’s so important for this specifically because [activewear] is a category that has historically been very fatphobic. We needed to have an appropriate size range so that we were signalling from the very beginning that this is a place where everyone is welcome.”

Motherhood was one of the many ways Griffiths and Graham bonded. Graham was an investor during a round of funding when the Knix founder, who was pregnant with twins at the time, made a rule that any potential financier who commented negatively on her pregnancy would be ruled out. How’s that for empowering? Graham herself recently took to Instagram to share the news of her second pregnancy. However, it was during her first pregnancy that her relationship with the brand began.

“I became pregnant soon after [discovering Knix], and it was a brand that could grow with me as I got bigger and bigger. And then it also was a brand that sustained me through postpartum. To me, that was really comforting because when you’re putting on clothes, you’re making a conscious effort every morning, whatever emotion you’re going through. When you’re pregnant, your emotions are out of this world all over the place, and there was a comfort in Knix — not just physically, but emotionally,” says Graham.

That sentiment is echoed in Knix’s core mandate (“designed to make you feel more comfortable in your own skin”) and can be seen throughout the entire activewear collection. From lightweight material built with four-way stretch to bonded inner seams that prevent chafing, it’s impossible to miss the care that has gone into designing Knix Active’s pieces.

“I always say that [most intimates] were designed to be worn for five minutes and then have someone take them off you. And you know, there’s a time and a space for that a hundred percent. But then there are also the products that you want to wear for 15 hours and be comfortable in to live your life. [Women] wear all these different hats, and I think the category hasn’t always acknowledged that,” says Griffiths.

As two women who wear many different hats themselves — Graham has her own podcast, models and is raising her son Isaac with another baby on the way; Griffiths is a CEO and mom of three — they agree there is power in comfort. Yes, comfort within the clothes you wear but by extension, comfort in being true to yourself.

“What’s most important is that everybody needs to be their most authentic self. This brand is exactly that — an authentic collection of who we are, and hopefully, that’s exactly how you will feel [when you wear it],” says Graham. “You don’t have to be an athlete to wear this activewear line. You don’t have to be a mother. You don’t even have to like moving. It’s really, truly made for everybody and every type of person at any stage of your life.”

While authenticity and empowerment are easy to preach, activewear brands often have trouble putting those sentiments into action. With a complicated history of toxic weight loss, dieting practices, and fat-shaming, the male gaze has plagued this category for years, as both the media and brands perpetrated the myth that women’s bodies weren’t their own but something to be commented on. A topic that Griffiths could discuss endlessly, the phrase “Because you’re not doing it for anyone but yourself” was a constant source of inspiration for the new launch.

“You shouldn’t be doing anything for anybody except for yourself,” Graham says. “I can say that if I’m not doing something for myself, I’m not going to be a better mother for my son. But I think that you can pour so much into all the facets around you, but until you really take care of yourself, that’s where you prosper and [find] happiness.”

For Griffiths, it wasn’t until she discovered that outlook that Knix Active truly came to life.

“There was just this shift for me a couple of years ago where I started exercising again and for the first time in my life, and I was working out because I just wanted to feel stronger. I wanted to have more energy, and it had nothing to do with the number on a scale. It had nothing to do with impressing somebody or fitting into that dress and all of the reasons I used to work out before. It was the first time that I was doing it just for myself, and that was such an empowered feeling. And it made me enjoy it so much more because it wasn’t like this calories in, calories out kind of message. We’ve been programmed to think [those things], and so like Ashley said, we have to come to a place where we’re doing it for ourselves.”

Photography courtesy of Knix
Get the best of FASHION in your inbox Thanks for signing up!
The latest fashion, beauty and celeb news delivered right to your email #FASHIONforall Now, check your inbox to complete your subscription
We won’t ever use your email address for anything else
Want even more FASHION? Follow us on social media.