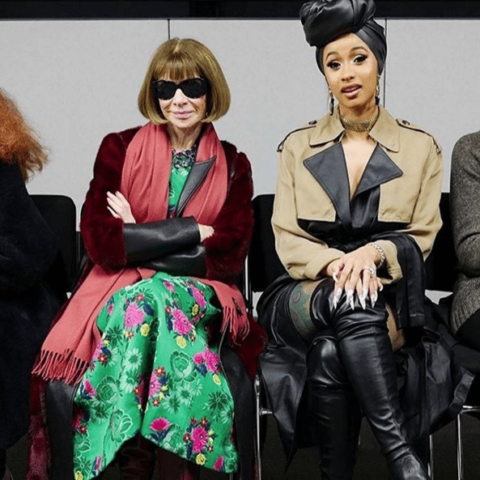 Cardi B has been the standout star at NYFW – she sat beside Anna Wintour front row at the Alexander Wang show wearing a stiletto crystal-encrusted manicure making the internet go wild seeing the unlikely duo together. She appeared at Christian Siriano in a green suit, channeling her inner boss lady and at Prabal Gurung in a gold overcoat with fiancé Offset. To end the week, she hung out with Lil’ Kim at the Marc Jacobs show, giving us another major moment. May the Cardi-ssaince of 2018 continue apace! (New York Times)

In July @marvel approached me about collaborating for @BlackPanther ? I spent several months designing everything and when the samples were finally finished 72hrs before they were to be released, I realized I hated everything. I basically went down a spiral of insecurity and took everything apart. At the height of my panic Attack I realized that anxiety and creative pressure is something we all go through but rarely address publicly. I decided to focus on 4 main anxieties I was having and channel each one into the building of a new shoe. Using both the left and right sided to explore the narratives. 1. Am I “asking for it?” – I believe that no woman’s clothing choice warrants another persons bad actions. 2. Does my hair look better now? – I have used sisal sourced from Africa for years in my design and am always interested to see peoples immediate need to ‘tame’ it. 3. Do I have enough Faith? 4. Am I Black enough? I’m sorry that it took me so long to post these I was a little in my head. Thank you to everyone who supported on this journey ? @brothervellies #blackpanther @marvelstudios

Black Panther continues to take the world by storm and its latest shoe collaboration with Toronto native Aurora James has swept us off our feet. James unveiled the collection at the Black Panther fashion show presented by Marvel to promote the movie during New York Fashion Week where the runway was transformed into Wakanda, the fictional African nation featured in the film. She publicly shared her struggles with anxiety and creative pressure when designing the collection and let her anxiety serve as inspiration for each piece by voicing them out. Yet another fashion point for Black Panther. (Forbes)

Although diversity appears to be having a moment in the fashion industry, it looks like we still have a long way to go when it comes to street style. Tyler McCall penned an essay on Fashionista on how fashion weeks around the world attract large diverse audiences, but the large majority of people who make it into popular street style galleries online always happen to be “thin, cis, white women”. She spoke about the emotional impact knowing that photographers get to decide wether someone is worth the space on their SD card despite the outfit being on point. It’s about time we see diversity both on and off the runway. (Fashionista)

Two more women have come forward to share their stories of alleged sexual misconduct at the hands of #Guess co-founder #PaulMarciano. Both of the newly revealed accusers, whose stories share striking similarities, have also publicly voiced their support for #KateUpton. Click the link in bio for full story.

A 23-year-old model Miranda Vee filed a report with the Los Angeles Police Department on Tuesday accusing Mohamed Hadid and Guess co-founder Paul Marciano of sexual harassment and assault. She’s being represented by Lisa Bloom, who also represents the male models who are accusing Bruce Weber of harassment. In a now-deleted Instagram post, Vee said that she met with Marciano to discuss a test shoot for Guess, and that he later arranged for her to meet with Hadid, the father of models Gigi and Bella Hadid. She claimed that they both sexually harassed her and then made her sign a non-disclosure agreement. (Hollywood Reporter)

Will Face Tattoos Be the Next Frontier for Fashion?

Face tattoos have often been associated with crime and a less than friendly impression but now it looks like the trend might be having a moment. As the stigma around more prominent tattoos is going away, far more celebrities are opting for ink that makes a statement. From 21 Savage’s cross on his forehead to Post Malone’s ‘Stay Away’ above his eyebrow (which he got just to upset his mother), there’s no better way to make a lasting impression. (The Outline)

After celebrating their brand’s 10 year anniversary, co-founder Michelle Ochs and Carly Cushnie are going their separate ways. The pair met while they were students at Parsons School of Design and a year later went on to create their successful minimal chic label. Their anniversary collection was inspired by architect Zara Hadid’s smooth architectural curves, celebrating their ten-year partnership. We’re curious to see what’s next for Michelle Ochs as she goes solo.

KORS YOU’RE WORTH IT. New York bound to see the unveiling of my collaboration with the one and only @michaelkors . Portrait drawn from life @claridgeshotel in 2016.

For the fall 2018 season, Michael Kors collaborated with an artist for the very first time. The special capsule collection with the British fashion illustrator will feature the artist’s portraits, capturing the style of the brand through watercolour. “David captures people’s essence and style without feeling the need to draw every detail about them — it’s the magic of a great illustrator,” Michael Kors said in a statement. We can’t wait to see what rest of this magical collab will look like. (WWD)

Photography via Instagram/@iamcardib
Get the best of FASHION in your inbox Thanks for signing up!
The latest fashion, beauty and celeb news delivered right to your email #FASHIONforall Now, check your inbox to complete your subscription
We won’t ever use your email address for anything else
Want even more FASHION? Follow us on social media.