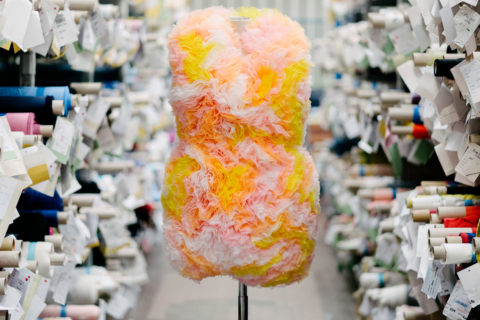 Tomo Koizumi’s Capsule Collection for Emilio Pucci Has Been Revealed

"It’s like one of my biggest dreams came true."

“I really wanted to create a fantasy side to fashion, which people really need now,” says Tokyo-based creative Tomo Koizumi shortly before his capsule collection for the Italian house of Emilio Pucci was unveiled this morning. Although Koizumi was experiencing jet lag–he’d flown into Milan just a day earlier–you’d never know from his affable, laid-back manner that he was about to debut a collection that contributes to the oeuvre of such an important brand.

The over seventy-year-old house of Pucci, best known for its wild print work that was a signature style of the free-spirited ‘60s, approached Koizumi to collaborate after he was named a finalist for this year’s LVMH Prize. (Instead of there being a winner this year, he and the seven other finalists received allocated funds from the total prize amount to assist in guiding their businesses through the COVID-19 crisis.)

“I always dreamed about working with a house that has great archives–I was really happy and excited when I got their email. It’s like one of my biggest dreams came true,” says Koizumi, whose joyful work gained much adoration after being discovered by super stylist Katie Grand, and was subsequently shown at Marc Jacobs’ Madison Avenue boutique during New York Fashion Week in 2019.

Koizumi’s designs, which boast an eclectic sense of colour and feature a ruffle-making technique that gives them an undeniably playful silhouette, drew inspiration from the Pucci Spring 2021 collection’s palette that includes shades of pink, orange, and yellow, and is anchored by stark white. He also found influence in the swirling Vetrate print from the house’s archives. “I was already familiar with their work, even before they contacted me,” notes Koizumi, adding that he collects archival Pucci items such as scarves and business card cases, and has a Taschen tome that explores its rich history of fashion innovation and boisterous motifs.

“Collaborations are so important, and this Emilio Pucci experience taught me so much because it has been a dialogue between [our] two worlds,” says Koizumi when asked why we’ve see so many novel partnerships within the industry over the past few years. “I had never worked with prints before, so I decided to recreate a sort of a print into [my] designs for this capsule collection; visually it looks like a print, but it’s actually just an effect that we created with a ruffle [technique].”

The result of this experimentation is an 11-piece collection filled with the unexpected silhouettes that have become Koizumi’s signature, in both solid and multi-hued iterations and done in fine organza; accessories and a t-shirt are also included in the mix.

“I really love to see fashion, not just clothes,” says Koizumi of how he approaches his design work, highlighting how uniqueness and meaning is something he longs to see in the fashion landscape, and that his own brand is focused on custom creations right now.

And he says that collaborating with Pucci, particularly during the last few months, has instilled a sense of purpose in his work. “This crisis pushed me harder to stay creative,” he says. “And this collaboration made me believe in myself. [We] tried really hard to make a beautiful masterpiece together.”

See Koizumi’s Pucci capsule–as well as the rest of its Spring 2021 collection–in this dreamily escapist video.

Photography courtesy of Emilio Pucci.
Get the best of FASHION in your inbox Thanks for signing up!
The latest fashion, beauty and celeb news delivered right to your email #FASHIONforall Now, check your inbox to complete your subscription
We won’t ever use your email address for anything else
Want even more FASHION? Follow us on social media.