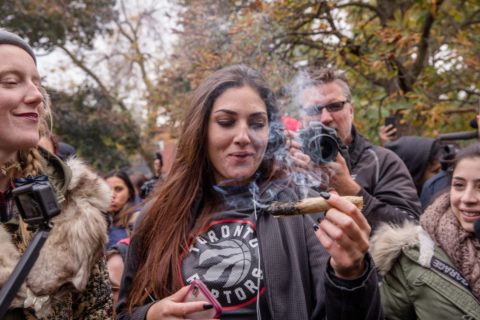 Why Aren’t Canadians Making a Bigger Deal Out of Legalization?

It’s a little after 10am on a crisp autumn Wednesday and Toronto’s bustling West Queen West neighbourhood is still distinctly sleepy. Nearly everyone I pass on the street sails by with headphones firmly planted in ears and clutching coffee cups for dear life. It’s a perfectly pleasant, average morning, only it’s not. It’s October 17th, the first day that recreational marijuana use is legal in our fair country and yet no dank-smelling clouds bloom in the air, no debauchery spills out onto the street, and not even a casual joint is being puffed is anywhere in sight.

Canada is only the second country to legalize the use of recreational marijuana in the world – the first was Uruguay –and the world’s eyes are tuned in to see how this massive national experiment will unfold. I’m not sure exactly what I was expecting – fireworks? a parade? – but somehow the public sentiment towards legalization strikes me as utterly blasé for one of the most historic events in recent decades. (Typical Canadian to not make a big deal of ourselves.) Perhaps the most surprising aspect of legalization is that the country’s reception of it has been downright sober.

I’m on my way to a Leafly pop-up, which promises to provide information and answer people’s, um, burning questions about cannabis. Three burly men linger outside the entrance, which suffuses the pop-up with a semblance of sketchiness, but inside, the vibe is about as far away from an illicit scary head shop as you can get. Coffee and pastries are served and a well-dressed woman hands me a pamphlet titled “Cannabis 101” which offers advice on responsible consumption that includes “Go slow” and “Be patient.” Almost everyone inside the pop-up appears to be affiliated with Leafly, or like me, a member of the media there to survey the surrounding mood. Could it be possible that despite the media blitz, little in Ontario has actually changed?

I’m curious, most of all, because I currently don’t smoke weed – I’ve never enjoyed the brain fog, dry mouth and inevitable snacking spree that come along with getting high – but now that procuring it no longer involves a sketchy handshake in a parking lot, I’m becoming more receptive. The primary reason why I never got into weed is because in my juvenile experiments with the drug, I never enjoyed it enough to go out of my way to get my hands on it. I’d smoke it socially with friends in university, but I never got into the habit of having it around. Now that access is infinitely easier and there’s so much more information circulating on which strains to avoid if I don’t want to feel certain effects, I’m ready to give weed, or ahem, “cannabis” another shot. (I realize this makes me sound like a giant narc, but that’s probably a fair assessment.) So why isn’t the rest of the world as stoked on exploring these developments as I am?

When I ask Michelle Bilodeau, founder of the Eco Edit and a former host of the High Tea Life podcast, why she doesn’t think people are making a bigger deal out of legalization, she suggests that it’s because cannabis is already a part of many people’s everyday lives. “For a lot of people, legalization just means that now they won’t face criminal charges for doing something they were already doing — and those users will be more relaxed, there will be less stigma, and people will start to feel less guilt about it.”

Odessa Paloma Parker, the former Head of Content at Tokyo Smoke, has some different ideas about why legalization isn’t being more widely celebrated. “I think many people are afraid to seem like a “stoner” or that they’ll be judged if they celebrate legalization openly. The stigma that clings to smoking weed is still very real and pervasive despite everyone thinking we’re super chill about it,” she says. “And frankly much of the blasé attitude I’ve seen is coming from white cis men, which highlights their privilege when it comes to weed consumption and purchasing.”

So it’s not that people don’t care per se, it’s just that they’re either inured to that fact that marijuana was, you know, illegal until now or they don’t want it to affect their reputation etc.

After work, I go to the post office to return a package and notice that the clerk’s eyes are the colour of a tomato and seems to be enjoying himself. Could this be the first high person I’ve encountered all 10/17? Perhaps the fact that people can only purchased legal weed online from the OCS and most of it hasn’t shipped out yet is influencing the placid mood. Or what do I know, maybe everyone is just high.