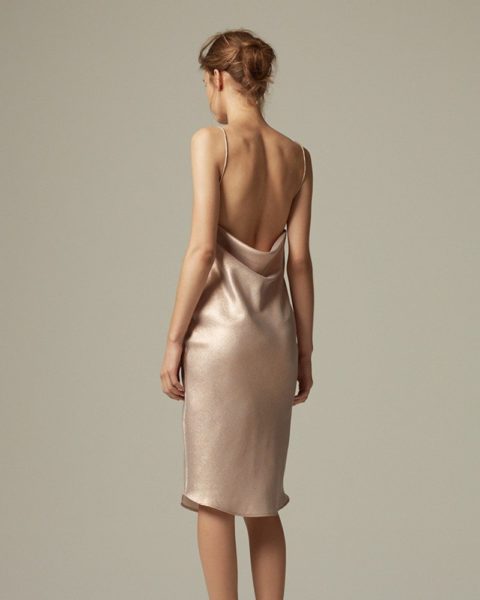 It’s no secret that Canada breeds incredibly talented young designers. And if you thought we were finished with fashion week coverage, think again! We saw a number of incredible Spring 2016 collections during World MasterCard Fashion Week a couple of weeks ago, but several of our favourite collections didn’t showcase at the tents, and they deserve a shout out. We’ve rounded up six collections you didn’t see on the runway.

Securing a coveted spot in the inaugural VFiles show back in 2013, Steven Tai left us wanting more after sending models down the runway in structured tees, voluminous skirts and baseball caps, all in a clean palette—a refreshing contrast to the looks his counterparts showcased that day (after all, it is VFiles). Since then, Tai, whose creations regularly employ techniques such as heat bonding and silk screening, has established himself as a budding Canadian talent. The woman he dresses is part-nerd, part-tomboy, with endearing quirks (Tai’s been known to use brace-faced models). You could say she’s a more refined, and avant-garde, version of Luella’s long-gone geek. For Spring 2016, the Vancouver-born, London-based designer incorporated a crafty touch in his quintessential dorky muse: high-collared blouses with appliqué flowers, pastel doodles scribbled onto swing dresses, and ruffles as far as the eye can see. Genius, indeed.

Sisters Parris and Chloé Gordon have done it again. After a well-received Fall 2015 showcase, the ladies behind Beaufille have followed up with their Spring 2016 collection, and it’s everything we could have asked for (and more). Over the past few years, the Toronto-based duo have made a few tweaks to their brand, from opting out of fashion week to a drastic name change. However, since then they’ve garnered attention from the likes of Vogue and Nylon, and have dressed #dgaf badass types like Lola Kirke and Banks in their minimalist pieces, confirming that they belong within the ranks of Lemaire, The Row and Céline. In keeping with their “handsome girl” M.O., their latest collection includes sharp lines and extreme cuts that reveal just the right amount of skin. And in case you missed it, Lady Gaga was spotted earlier this week donning the duo’s suede two-piece cropped flare look.

We’ve been adherents of Markoo since day one, and, from the looks of it, the rest of the world has caught on. Having stolen our hearts with their debut Spring 2014 collection, Toronto-based designers Tania Martins and Mona Koochek have since been churning out pieces for the ideal downtown girl, resulting in shout-outs from Harper’s Bazaar, WWD and even Selena Gomez, who was spotted last month in New York in a midriff baring two-piece from the duo’s Spring 2016 collection. Also part of their latest collection are slinky wrap dresses, sleek trousers, simple tank tops and even a biker jacket. It’s everything you’d need to assemble a warm-weather capsule wardrobe. “We wanted the pieces of be feminine but very classy and cool,” says Koochek of the direction they took, veering from their usual moody palette and swapping it for soft yellows and whites. However, for those fan girls of the label, not to worry. Each yellow piece also comes in black.

We were pleasantly surprised when the pink mohair chubby from Jennifer Torosian’s Fall 2015 collection arrived in our office this summer. The Toronto-based label, founded by Jennifer Torosian and Raed Ali, focuses on creating tailored separates with a twist, ideal for the modern-day working girl. The Spring 2016 collection is filled with neutral separates that, at first glance, may seem a tad bit conservative, but upon closer inspection prove otherwise. There are classic shirt dresses with perforated cuffs, asymmetrical wrap skirts, and sporty bombers paired over watercolour-printed dresses. Millennial friendly, as we like to call it.

Windsor-born designer Chris Gelinas has come a long way since the first time we saw him present his Fall 2014 collection at NYFW. His latest CG lineup deviated from the futuristic feel of his first few shows, and didn’t exude the workwear-esque vibes that his Fall 2015 pieces evoked. Sticking to his signature structured approach, Gelinas incorporated an element of surprise with more fluid silhouettes than his usual. Think a breezy evening dress donning an exposed back, and airy blouses replete with floral motif appliqués. On the more tailored front, a flounce skirt (a piece that has become synonymous with CG) rendered in forest green was paired with a corresponding top, deceiving us into thinking it was a dress, and Gelinas experimented with checked patterns that screamed Thom Browne.

Leave it to Kaelen Haworth, of Kaelen, to conceive meticulous accordion pleated sleeves that would make any Rosie Assoulin devotee swoon. This is just one of the 29 looks in the New York-based designer’s Spring 2016 lineup that had us feeling all of the feelings. Although a number of pieces relied heavily on the use of sharp lines, Haworth plucked inspiration from the sandy terrains of New Orleans, Dallas and Marfa while on a road trip down south. A muted palette of washed-out greys and subdued pinks complemented the draping of fabrics—evocative of the landscape one would encounter in the desert. Of the more minimal numbers in the lineup, a silken blush-toned slip dress proved to be a standout piece, and something we would have loved to see Léa Seydoux wearing in Spectre.