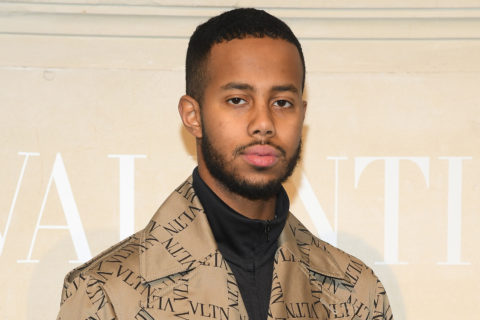 He'll appear alongside the likes of Gwyneth Paltrow, Laura Dern and Naomi Campbell.

As the world continues to feel the effects of the COVID-19 pandemic, fashion houses are having to shift the way they do things, particularly when it comes to campaigns. Last week, Bella Hadid starred in the first major luxury campaign to be shot over FaceTime for Jacquemus, and now, Valentino has revealed its plans for its Fall advertising campaign.

According to WWD, creative director Pierpaolo Picciolo has tapped his network of high profile friends to appear in the brand’s upcoming men’s and women’s campaigns for Fall. So far, the list includes the likes of Gwyneth Paltrow, Naomi Campbell, Christy Turlington, Anwar Hadid and Laura Dern. Each of the stars has agreed to waive their fees for the project, with the house donating one million euros to the Lazzaro Spallanzani Hospital in Rome to help with its COVID-19 relief efforts. Each star will be shot in their own home (by someone they’re living with), wearing clothes from Valentino’s upcoming collection.

Excitingly, Canadian spoken word artist Mustafa the Poet (whose real name is Mustafa Ahmed) has also been tapped for the opportunity. This won’t be the first time the Canadian has worked with the Italian brand, either. For its F/W 20 campaign, Valentino asked Ahmed to create a series of poems to appear on pieces in the Valentino On Love collection. Plus, in February, Schitt’s Creek star Dan Levy wore a custom Valentino tux to the Vanity Fair Oscars afterparty that was adorned with the words of one of his poems.

Speaking to WWD about the importance of diversity in the upcoming campaign (which is due for release in September/October), Picciolo said of the stars, “All of them share individuality, talent, self-expression and freedom. I don’t want to define anyone in any box.” He added, “It’s not about hair and makeup, but it’s about the authenticity of beauty, the diversity of beauty.”

Photo by Pascal Le Segretain/Getty Images
Get the best of FASHION in your inbox Thanks for signing up!
The latest fashion, beauty and celeb news delivered right to your email #FASHIONforall Now, check your inbox to complete your subscription
We won’t ever use your email address for anything else
Want even more FASHION? Follow us on social media.