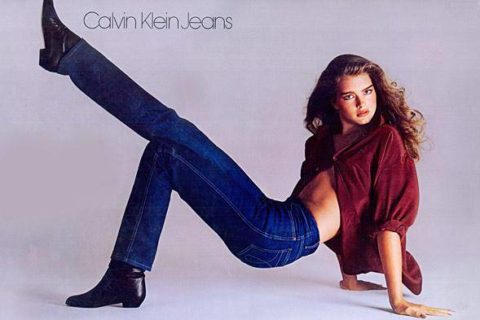 Before Kendall Jenner or even Kate Moss hit the ground running in their Calvin Klein ads, there was the controversial campaign starring a 15-year old Brooke Shields stating that “nothing” came between her and her Calvin’s. The campaign was a massive success, and elevated Ms. Shields from young model/actress to cultural icon. And that notoriety is now sealed – or shall I say stitched – into fashion history with the new Calvin Klein Brooker hooded sweatshirt which features a pop-art take on Shields’ famous pose, on the back.

Not surprisingly, the sweatshirt was an instant social media hit with commenters declaring “that’s the only way to look at Calvin Klein” and sharing that Shields was “the reason we all bought a pair.”

In June the original supermodel with #EyebrowGoals stripped down to show off her Calvin’s and recently stepped out at the Accessories Council Awards looking timelessly chic in head-to-toe Calvin Klein. With the hoodie’s release featuring the 80s campaign photo, it’s fair to say that timeless is an understatement. Brooke proves that she can still kick it with the cool kids.