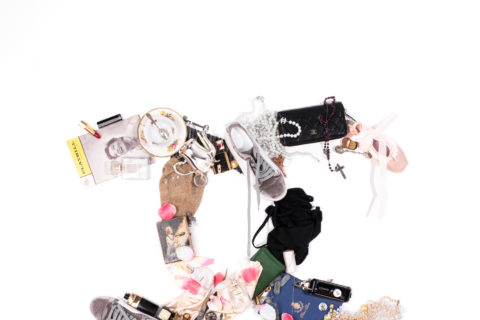 The Toronto Artist Recreating the Chanel Logo Out of Everyday Objects

At first glance, the canvas depicting two interlocking C’s appears to be a fairly straightforward sight. But move closer and you’ll notice ballet slippers, a rosary, a strand of pearls and a tube of lipstick. A cornucopia of everyday objects arranged painstakingly to recreate one of the most iconic fashion logos of all time.

The artwork is just one of the works on display at Homage, an art exhibition that doubles as a love letter to pop culture on display at somewhat fortuitously at the location of the old Jonathan & Olivia store (49 Ossington Ave.) until April 13th. In six sprawling pieces, artist Briony Douglas — who goes by the mononym Briony — has created a series of 3-D collage installations that quite literally pay homage to memorable pop culture milestones. Kanye West’s Graduation Bear mingles alongside Michael Jordan’s jumpman logo, and Jean-Michel Basquiat’s crown icon hangs nearby a profile of a Barbie Doll’s head. There’s seemingly little connection between each fragment, but Briony, a bubbly bottle-redhead, explains that each subject was selected based on their personal significance.

“Something I didn’t realize I was doing is I definitely chose people who persisted and persevered through hard times, which I definitely resonate with…I went through a lot [as a kid], so[I] learned pretty young to be an adult and get through it. Failure was not an option for me,” she says without elaborating.

Beside each 3-D collage hangs a legend describing the significance of each individual object the collage is comprised of. For example, those ballet slippers at the upper left hand of the Chanel logo? They’re there to symbolize that Coco Chanel designed costumes for the Ballet Russes. A vintage menu hailing from the swanky Ritz Hotel in Paris commemorates the time Coco Chanel spent hiding out there during WWII.

Though each work might appear to be made out of discarded objects, perhaps nostalgic remnants fished out of somebody’s parents’ basement, closer inspection reveals that each collage contains a smattering of extremely valuable collectible items.

Briony spent the better part of six months scouring eBay, Etsy and the antique stalls in Toronto’s St. Lawrence Market to gather all the objects she needed to create her art. “I don’t know if you’ve ever ordered off of eBay, but it was so stressful,” she says. “There was some stuff that came four months after I ordered it.”

And it didn’t come cheap, either. Briony sourced a pair of Jordan 1 sneakers for her Michael Jordan collage valued at approximated $1000, only to saw them in half for the sake of art. “There are so many people coming in and being like “I can’t believe you cut that in half.” A VHS copy of Spike Lee’s She’s Gotta Have It, somehow cost $60. (A far cry from $1 bins of VHS that populate most garage sales.)

Homage is the artistic equivalent of happening upon a flea market that contains a whole treasure trove of fascinating things. Briony describes her intention as a way to disrupt the fleeting nature of Instagram. “People are always like, “What can I create next that will get 500 likes?” With these, they force you to see and stop and just take it in.”

And you just might learn a thing or two as well.