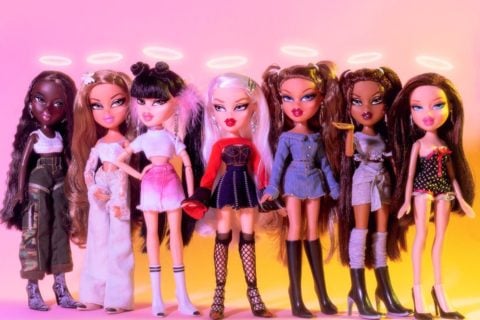 Thanks to Gen Z’s love for all things 2000s nostalgia, Bratz are back – or at least their style is.

In the early 2000s, no toy was more polarizing or controversial than the Bratz doll. Billed as the ‘anti-Barbie’ when they first hit the market, the dolls’ ballooned heads, dramatic eye makeup and suggestive clothing inspired the ire of both parents and feminists alike. Critics suggested that the ill-proportioned dolls could affect young girls’ developing self-esteem and skew their perception of healthy body image. Also, they were just too darn sexy.  “One other thing I noticed is that they all have bedroom eyes; a ‘come hither’ look that suggests they are trying to seduce someone,” wrote Humanist Mom in 2014. Nevertheless, adolescent girls idolized Bratz in spite of the overwhelming disapproval from elders.

If you happened to be an adolescent girl growing up in the early 2000s, you were either a Barbie or a Bratz fan, and it’s safe to say I was a diehard of the latter. I owned several Bratz collections, including the entirety of the Bratz ‘Formal Funk’ limo set, and spent hours on end playing with my Bratz dolls; dressing them up, fixing their hair, and hiding my favourites from my younger sister. Bratz dolls gave off a ‘cool girl’ energy that I longed to exude at the ripe old age of seven. I may not have been old enough to style my hair in Princess Leia buns or wear edgy clothing, but I was determined to live out my fashion fantasies through dolls that could.

As it turns out, I’m not the only person whose fashion sense was forever shaped by the iconic quartet of Yasmin, Cloe, Jade and Sasha. Thanks to Gen Z’s love for all things 2000s nostalgia, Bratz are back – or at least their style is. With their skimpy skirts, baby tees, funky hats, and chunky platform shoes, Bratz have become the under appreciated style icons we never knew we needed. Popular Youtubers Safiya Nygaard and Katie Orlowski of StealTheSpotlight have both created videos showing their followers how to dress like Bratz dolls, and in early 2019 the viral #BratzChallenge invited participants to show off their makeup skills by replicating a Bratz doll’s makeup in real life — even James Charles got involved.

Unlike Barbie, which strived for timelessness, Bratz acknowledged the baby tees, low rise jeans and poorboy caps that were influencing fashion at the time. Bratz dolls were racially diverse and celebrated a group of girlfriends who were all portrayed as equals. They were unique and characterized by each girl’s individual likes, dislikes, and fashion sense. At the time, this new approach to inclusivity and girl power was a huge part of their appeal.

She fucking did that

One of the biggest proponents of the ‘Bratz aesthetic’ is Bella McFadden, perhaps better known by her Instagram handle @internetgirl. McFadden, a Winnipeg native who now lives in the US, runs one of the most-followed accounts on e-commerce app Depop, where her avatar is a picture of a Bratz doll and she regularly describes items she’s selling as “Bratz-inspired.” McFadden is so dedicated to Bratz dolls, in fact, that she got a Bratz tattoo inked on her arm last May.

Other influencers have adopted the look too. If musician Maggie Lindemann were a Bratz doll, she would undoubtedly channel ‘Pretty n’ Punk’ meets ‘Rock Angelz’.  Lindemann has been referred to as a living Bratz doll thanks to her signature style of graphic tees, chunky jewellery, and sky-high platform boots; Devon and Sydney Carlson of Wildflower Cases could easily pass for live-action versions of Jade and Yasmin with their mini skirts, ‘Bratz shoes’, and logoed baby tees. Bratz dolls have made contemporary dressing significantly more fun by encouraging a mixture of fashion from decades past; flared plaid pants, platform shoes, and cropped cardigans come together to create an aesthetic that’s quintessentially 2019.

But why now? Jordan Duncan, a 19-year-old from Chicago, Illinois who runs the Bratz fan Instagram account @bratzieb says that Bratz dolls are “more than 2000s fashion icons”; They were “made to represent and celebrate individuality with fashion being the common interest that unites society,” he says. Duncan notes that the “Bratz community” he considers himself a part of exists to celebrate the “uniqueness and individual talents that set us apart from one another.” Bratz were known for their “passion for fashion” and their daring stylistic choices. The dolls remind us that we don’t have to dress for anyone but ourselves.

warning i am extremely cool !!⚠️⚠️

Alongside Instagram, our clothing is becoming less curated. People are being recognized as individuals through fashion because they’re increasingly dressing for themselves. The Bratz aesthetic is inspiring people to done their finest thrift store threads to pose in front of their local grocery store. Gone are the days of pretty pink dresses and ballet flats by a rose garden backdrop. The Bratz doll effect is encouraging us to explore our individualism through fashion, and throw on an edgy platform shoe or two.