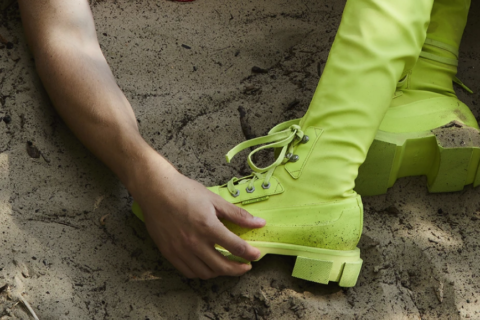 Paris-based footwear brand Both is poised to elevate the humble material of rubber.

Keen observers of the New York Fashion Week runways likely noticed something unexpected on the models’ feet at the Monse Fall 2020 show. To complement the array of garments that heavily featured tartan and Fair Isle motifs (plus a suit festooned with safety pins), designers Laura Kim and Fernando Garcia worked with Both—a brand known for its unique use of rubber on its shoes and accessories—to create a capsule of genderless footwear that would correspond to the season’s punk inspiration.

The resulting styles include bold boots, ranging in height from thigh-high to ankle, and chunky derbies that play up the rough, androgynous street style of late-‘70s London. “Everything went really quickly,” says Both’s global brand director Angela KeiKei Ng while describing how the collection for Monse was created. “Our aesthetic and style really meshed.”

The concept of mixing and melding sensibilities deeply resonates with Both as a brand, right down to its name. “It represents a balance,” says Ng, who spoke with FASHION during a visit to WDLT117 boutique, which carries Both exclusively in Toronto. “Men and women, old and new, East and West.”

One only has to look to the Both team’s globe-spanning team—Ng divides her time between the headquarters in Paris as well as outposts in Shanghai and Tokyo, while their art director is based in Berlin—to understand how true this notion of collaboration runs.

The concept of unity is also evident in Both’s designs, which mix the natural material of rubber with tech-forward fashionable design. Giving rubber an upgrade is rooted in experimentation for Both, which employs novel textures and daring colourways to differentiate their styles from your regular rubberized sneakers.

And speaking of NYFW, check out the best street style looks so far.

Photograph courtesy of Instagram/@bothparis
Get the best of FASHION in your inbox Thanks for signing up!
The latest fashion, beauty and celeb news delivered right to your email #FASHIONforall Now, check your inbox to complete your subscription
We won’t ever use your email address for anything else
Want even more FASHION? Follow us on social media.