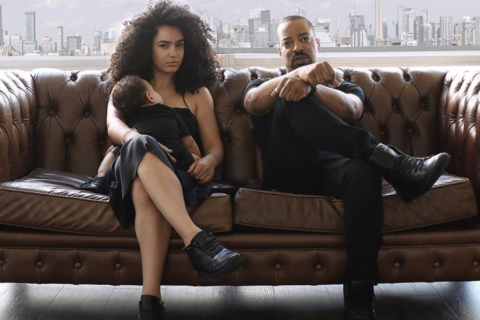 "Canadians are speaking up like never before and most importantly owning up to the fact that systemic racism is here and deeply rooted," he says.

Yesterday it was announced that Toronto-based fashion entrepreneur and footwear designer George Sully is developing a digital index of Black Canadian fashion creatives, which he’s hoping to launch later next month.

Sully, who is known for his brands Sully Wong—which he co-founded with Henry Wong, and House of Hayla—which he runs with partner Hayla Amini, says he was motivated to create the list because “for far too long the Black community has been marginalized when it comes to fashion and our contribution to it,” he says, adding, “I thought it best to create a platform to take away the excuses rooted in ignorance to justify exclusion.”

One of our all time favs @elisabethmossofficial on set, looking sweet in her SW Salmon Lows, part of her June flashback look for season 2 of the @handmaidsonhulu #thehandmaidstale #sullywong

Right now designers can submit their names for inclusion in the project at the website Sully has launched, and he says that eventually their presence on the index will be amplified through video content. “I hope visitors, including but not limited to buyers, distributors, retailers, stylists, et cetera, come away with more of a complete picture of what black designers have to offer and how brilliant we truly are,” Sully notes.

Sully initially entered the fashion world after being involved in the local music industry. “I was doing rap and producing songs, then I got into a lot of house and started djing,” he recalls. “After the djing took off, then I started saying, what’s next? And when I saw Diddy go from music to fashion and make that transition, I thought wow. I can make that transition.”

Since then, Sully has gone on to create two successful customer-facing brands as well as Shoeonado, a private label company. His designs are found in Toronto’s Bata Shoe Museum and are seen in the show Star Trek: Discovery. He also did a collaboration with fellow Canadian brand, Nobis.

His unyielding ingenuity is perhaps most obvious in House of Hayla’s offerings; he and Amini launched the brand after noticing the lack of monochromatic footwear options on the market and seizing the opportunity to create vegan material-fabricated pieces from pumps to sneakers in a variety of bold colours. They’re about to launch men’s styles as well as shoes for children, and Sully says they’ve also expanded to “queen sizing” for the drag community.

For all his accomplishments, though, Sully points out that he and fellow Black designers are largely underrepresented in the Canadian fashion industry and in media coverage. “How do I explain to my son [with] all these things that I’ve achieved—does he have to take my word for it because it’s not archived,” he asks.

Through creating the Black Designers of Canada Index, Sully is setting in motion a resource to ensure that moving forward, his peers will have the platform they deserve, and the ensuing recognition. He rightly notes that Black designers in Canada—despite receiving more attention in the past few weeks—are not, and should not, be treated as a novelty. As Sully puts it, “We’ve always been here.”

Photography courtesy of Instagram/@houseofhayla
Get the best of FASHION in your inbox Thanks for signing up!
The latest fashion, beauty and celeb news delivered right to your email #FASHIONforall Now, check your inbox to complete your subscription
We won’t ever use your email address for anything else
Want even more FASHION? Follow us on social media.