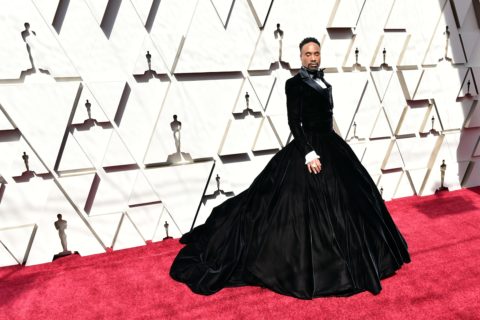 A tale as old as time: a woman wanting to seem less high maintenance dons a slick menswear tuxedo to make an appearance at whatever fussy event she’s been tasked with attending. How blasé!

But for the 91st Academy Awards, Pose actor Billy Porter gave the tired formula a delicious twist by debuting a gigantic velvet skirt that seemed to unfurl from his fitted shirt-jacket combo. The tuxedo dress, by designer Christian Siriano, took up the space of three lesser dresses and wouldn’t look out of place in a Velazquez painting.

Shutting the carpet down In a Siriano velvet tuxedo gown! #billyporter at the #oscars @theebillyporter pic.twitter.com/7PaSPJkRi2

Porter’s tuxedo dress is remarkable; not because it’s the first time men have appeared on the red carpet wearing dresses — remember when South Park’s Matt Stone and Trey Parker showed up to the ceremony tripping balls on acid wearing garish prom dresses? — but because ‘androgyny’ is so often characterized as a woman dressing like a man. Porter decided to subvert society’s expectations of what a well-dressed man should look like.

In an interview with Vogue, Porter has this to say about the first time he tried on the dress: “I felt alive. I felt free. And open, and radiant. And beautiful! Which has not always been the case for me. I haven’t always felt so good about myself. It really is astonishing how much of an affect[sic] clothes have on your spirit.”

Porter’s embrace of feminine dress demonstrates that there’s no inherent shame in masculine-presenting people wearing dresses, that garments traditionally worn by women can be majestic, forthright and downright, well, empowering on anybody. And when was the last time you heard that word applied to anyone but women? Perhaps it’s not women that need to be empowered by garments (after all, we’re perfectly capable of empowering ourselves), but garments themselves that need to be liberated from the strictures of the gender binary.

Considering how well Billy Porter carried off the tuxedo dress, it’s fairly safe to say that he has won the award for the Best Dressed Actor on the Academy Awards Red Caret before the ceremony has even begun. (Not that it’s a competition, ahem.)