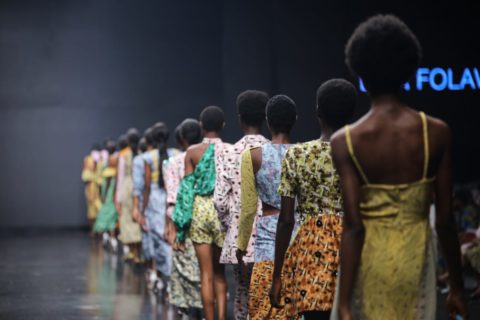 The seaport city of Lagos, Nigeria exudes creativity. As the so-called fashion capital of Africa, its citizens aren’t afraid of breaking fashion rules; the louder the print, the bolder the better. Lagos has hosted its own fashion week since 2011, and the annual events attract some of the continent’s best designers, inspiring many more to enter the industry. This year over fifty designers gathered in the city to present their Spring/Summer 2019 collections. Below we’ve curated five of our favourites.

Though Nkwo Onwuka debuted her line in London in 2007, she relaunched it in 2012 as an artisanal brand. This change was inspired by Onwuka’s research of traditional craft skills; she often incorporates weaving, beading and embroidery into her work, and employs local artisans to produce her designs. In this collection, traditional Nigerian head wraps (also known as geles) are fashioned from plastic laundry bags.

By adding ornate details and meticulous embroidery, Folawiyo transforms common ankara fabric into something brand new and, in turn, has become a globally-recognized name. To date she’s dressed stars like Lupita Nyong’o, Solange Knowles and Thandie Newton and her line has been picked up by the likes of Selfridges and Moda Operandi. Her collection at Lagos Fashion Week continued to pay tribute to her love of prints and each look was a masterful mash-up of colour.

Anyango Mpinga is a fierce social activist as well as a fashion designer. She used her Lagos Fashion Week show to campaign against human trafficking, by highlighting her “FREE AS A HUMAN” initiative, which aims to end the sexual exploitation of young girls. Much of the collection centred around playful textiles—like the newspaper and hummingbird print above—but while the artistic prints read fresh and modern, Mpinga also used her accessories to create a whimsical juxtaposition. Many of the models donned feather-topped boater hats, a styling choice that gave a distinct nod to the early 20th century.

A favourite of Michelle Obama, designer Maki Osakwe was actually invited to the White House in 2014 for her work and also achieved finalist status in the first LVMH Prize for Young Fashion Designers. For Lagos Fashion Week, Maki Oh used a plethora of fabrics, from traditional indigo hand-dyed prints—referred to in Nigeria as Adire—to this metallic purple midi-dress.

A trailblazer in Nigerian fashion, Deola Sagoe got her start in the fashion industry back in 1988 when she joined her mother’s business. After finding her own distinct voice, she started her own label of haute couture designs. In this collection, many of Sagoe’s pieces took on an almost origami-like feel and each outfit featured various plays on texture. From draped fringe to curly spiral cut-outs, each look that Deola sent down the runway was a statement.

Photography by Kola Oshalusi (Insigna)
Get the best of FASHION in your inbox Thanks for signing up!
The latest fashion, beauty and celeb news delivered right to your email #FASHIONforall Now, check your inbox to complete your subscription
We won’t ever use your email address for anything else
Want even more FASHION? Follow us on social media.