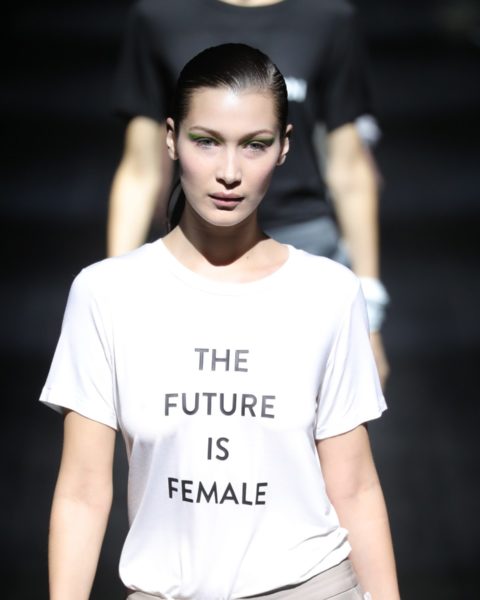 Here’s Why Bella Hadid Cried Walking the Runway at NYFW

In lieu of a sparkly finale, Prabal Gurung sent models down the runway in t-shirts printed with politically charged messages. Hadid lead the pack, wearing a top that read The Future is Female. The “It Girl” was followed by a string of diverse models, each sporting similar tees stamped with powerful slogans like I Am An Immigrant, Breaking Down Walls, and Stay Woke. Prabal ended the parade with a message of his own, bowing to a standing ovation in a shirt reading This Is What A Feminist Looks Like.

“This whole show was about women’s empowerment, self-love, and powerful, strong women,” Hadid told MarieClaire.com. “Prabal doesn’t tell us how to walk. He says, ‘Be yourself. Be the way you want to be. Be happy. Be strong.’ Every single girl here is so strong and beautiful in her own way. I was crying during the finale. Right now, the way the world is, it’s a beautiful message to pass along.”

Political statements are rocking the runway this season. Here’s a roundup of the ways that designers, models, bloggers and celebs are using fashion week as a rallying cry for feminism and inclusivity. 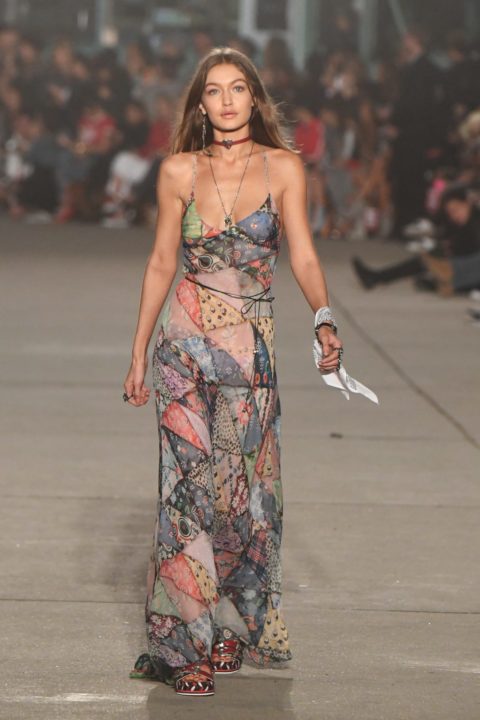 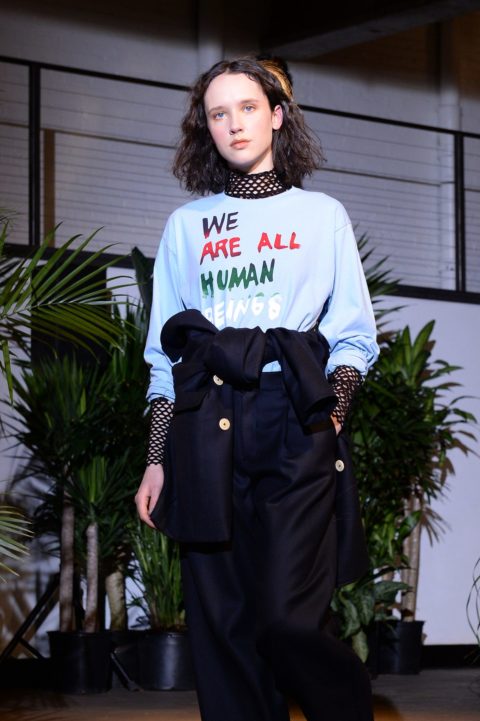 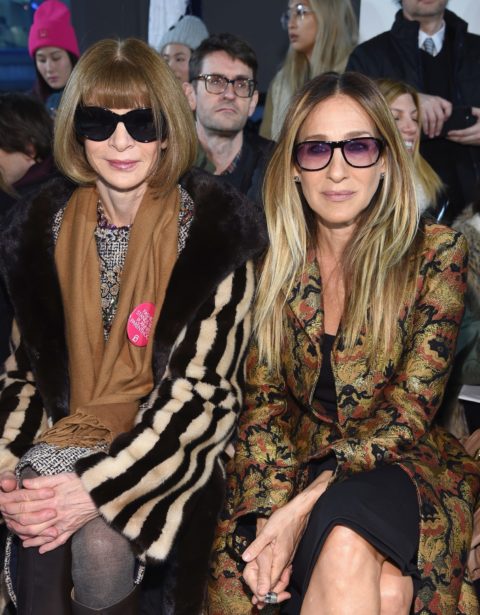 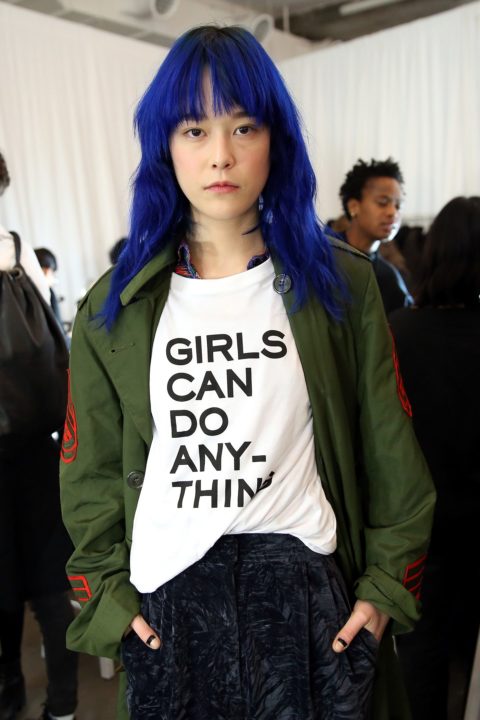 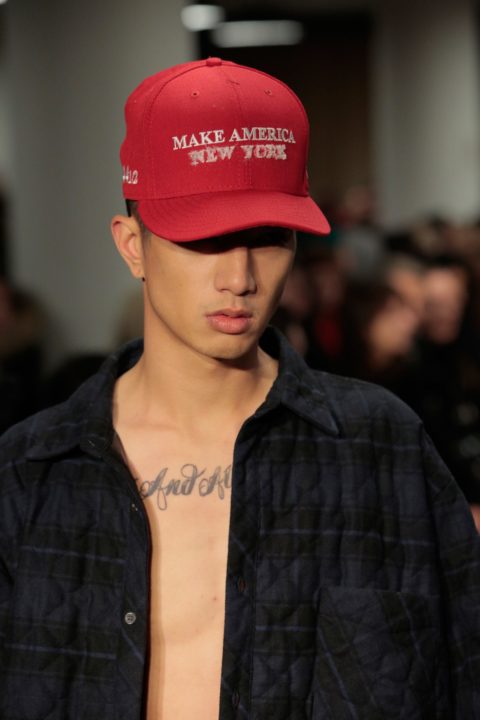 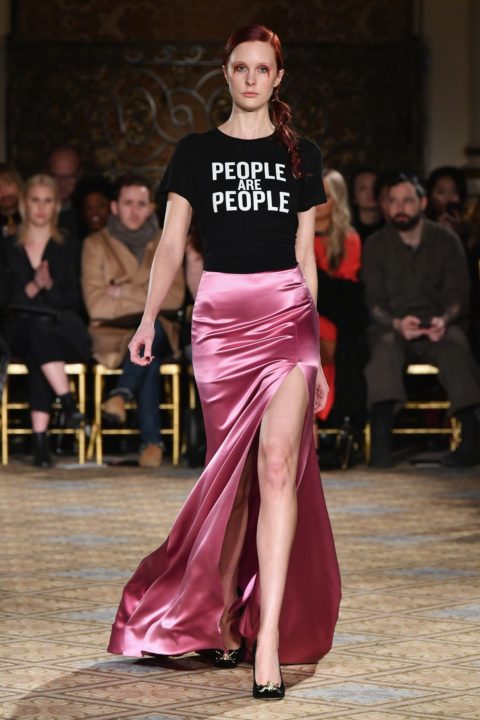 Curious what all those white bandanas are? Business of Fashion spearheaded the #TiedTogether movement, which encourages fashion followers to send a message of solidarity and unity by sporting a white bandana.

Creatures of Comfort’s runway show featured limited edition t-shirts that read We Are All Human Beings. “It’s kind of a reaction to what’s happening right now,” the brand’s founder Jade Lai
told Vogue. “I thought it was a good way to bring positivity to what’s going on.”

The Council of Fashion Designers of America distributed pink pins that read “Fashion Stands with Planned Parenthood” and encouraged fashion week participants to wear them as an accessory. Even Vogue editor-in-chief Anna Wintour is taking part.

Models were photographed backstage at Zadig & Voltaire wearing Girls Can Do Anything t-shirts.

Walking down the runway to a remix of “This Land is Your Land”, Public School’s models threw shade at Donald Trump with this redesigned Make America Great Again hat.

“I just felt like it was nice to end the show on a little bit of a cleansing idea,” designer Christian Siriano told The Hollywood Reporter. “People are people, we should all be celebrated in our own way. It’s very simple. It’s not that hard to do and I think that that’s what it was about.”

Photography via Antonio de Moraes Barros Filho/FilmMagic
Get the best of FASHION in your inbox Thanks for signing up!
The latest fashion, beauty and celeb news delivered right to your email #FASHIONforall Now, check your inbox to complete your subscription
We won’t ever use your email address for anything else
Want even more FASHION? Follow us on social media.