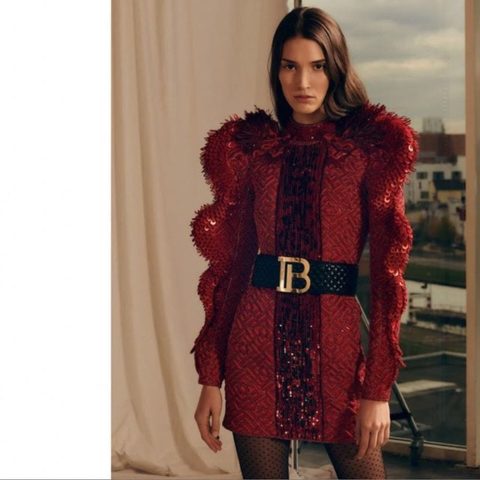 Balmain’s New Logo Marks the ‘Beginning of a New Era’

Yesterday Balmain announced a logo switch-up during one of their pre-fall presentations. On one hand, the news isn’t that surprising given that many luxury designers have changed their branding in 2018. During the summer, Riccardo Tisci swiftly redesigned Burberry’s logo after being appointed creative officer. And after Phoebe Philo left Celine earlier this year, her replacement Hedi Slimane made the controversial decision to send Celine’s accent packing, too.

On the other hand, it was a little surprising to hear the news coming from a brand like Balmain. Unlike Tisci and Slimane–who were both new to their roles–Olivier Rousteing has sat at the helm of Balmain for almost eight years. But although his position has stayed the same, he maintains that the new logo will bring about major change. “It’s finally the beginning of a new era,” he told Vogue. “And I know I already have so much to say for the next chapter.”

If the next chapter is anything like the new logo, we expect to see a lot of simplification in Balmain’s future. The emblem is a clear departure from the brand’s previous maze-like design which (if we’re honest) felt a little busy. Instead, the new logo is clean and modern, appearing at first as a simple letter B. Upon closer inspection, The B also houses the letter P–an obvious allusion to Paris, but also a tribute to the brand’s founder, Pierre Balmain.

“We are known enough that we can push our heritage,” Rousteing said. “Everyone knows me for the craftsmanship, the sexiness and for pushing the limits. Now I want to make sure this B becomes the symbol of French, timeless luxury.”

The logo was developed by Paris-based creative studio, Adulte Adulte and reportedly took almost a year to perfect. However, reports have already began surfacing that the monogram bears a striking resemblance to the logo of Italian brand, Laura Biagiotti. Of course fashion industry watch-dogs, @diet_prada, were quick to post a comparison to their Instagram page.

So, @balmain introduced a new logo yesterday. Olivier Rousteing told Vogue that “getting the balance was an enormous amount of work—to arrive at a shape that people will remember.” Well, a job well done cuz people sure do remember it…from @laurabiagiottiofficial lol. Founded in Rome in 1972, Biaggiotti was known as “the Queen of Cashmere” according to the @nytimes , introducing what was then an uncommon fiber in luxury fashion. She was also the first Italian designer to present her collection in China in 1988. Dieters, what do you think of the new logo? Does it also bear a resemblance to the new @burberry logo? Lol. • #balmain #olivierrousteing #balmainarmy #bodycon #pierrebalmain #designer #luxury #rtw #paris #pfw #kardashian #kimkardashian #logo #typography #design #graphicdesign #identity #branding #logomania #wiwt #ootd #dietprada #couture #hautecouture

The new logo will make its official debut with the release of Balmain’s (appropriately named) ‘B bag’.

Photography via Instagram/@olivier_rousteing
Get the best of FASHION in your inbox Thanks for signing up!
The latest fashion, beauty and celeb news delivered right to your email #FASHIONforall Now, check your inbox to complete your subscription
We won’t ever use your email address for anything else
Want even more FASHION? Follow us on social media.