From North West to baby bloggers, all about fashion’s new pint-sized powerhouses

While most of her friends were pretending to feed a doll or, say, learning to use the potty, North West was sitting front row at New York Fashion Week. Or, rather, she was flailing front row at fashion week. At just 20 months old, little North West—offspring of Kim Kardashian and Kanye West—attended her dad’s Kanye West x Adidas Originals show in February with her mom, flanked by none other than Beyoncé and Anna Wintour. When Kimye junior threw a tantrum—hey, it’s what babies do—Wintour inched away and gave major side-eye (she reportedly went on to declare a ban on all children at fashion week). Oh, kids today.

Children being photographed with their famous parents is nothing new. Kids clad in designer clothes worth more than most people’s rent is also a common sight (for the record, North was photographed wearing a $3,500 fur coat the day before). But nowadays kids are experiencing—and influencing—fashion first-hand like never before. Take, for instance, a slew of stylish tots boasting tens of thousands of Instagram followers, their outfits providing inspiration and bringing smiles to even the most jaded of grown-ups. Or the kids—such as North West, Jennifer Lopez’s daughter Emme and Alicia Keys’s son Egypt—who accompany their parents to fashion week, often taking up prime front-row real estate (at Victoria Beckham’s Fall 2014 show, her three-year-old daughter, Harper, sat front row and picked her nose). Even designers themselves are inspired by children’s innate sense of style. For instance, Alexander Wang’s adorable niece, Aila, serves as his unofficial muse. At Dolce & Gabbana’s recent motherhood-themed Fall 2015 show during Milan fashion week, models—one pregnant—walked the runway with children and babies in tow.

Related: It freaks me out when kids dress like tiny, hip adults

“Kids are becoming more visible and, let’s face it, they’re just cute,” says Jenny Cooper, head designer at Crewcuts, J.Crew’s children’s line. In a bold and unprecedented move, Cooper and J.Crew president Jenna Lyons recently tapped a four-year-old to help design a capsule collection for Crewcuts’ Summer 2015 line. Mayhem, an Ohio tot (real name: Sydney Keiser, now five years old) first gained attention in 2014 when photos of her couture-like paper dresses went viral. With help from her photographer mom, Mayhem uses things like construction paper, tissue, scissors and glue to create colourful dresses inspired by everything from My Little Pony to red-carpet gowns. Her nine-piece collection for Crewcuts—which includes sparkly hair bands, shoes and a long, full skirt—is heavy on pompoms, tassels and jewels. “It’s very whimsical and fun to wear,” says Cooper. “We were a little skeptical at first. Then, when you meet Mayhem, you realize that she is coming up with this stuff herself. She’s very independent and creative—it really is incredible.” (The design process took place over two days and included multiple naps.)

Today Mayhem’s mom, Angie Keiser, runs a blog (fashionbymayhem.com) and has a whopping 472,000 followers on Instagram, where she showcases her daughter’s creations. Last September, the duo headed to New York Fashion Week for the Reem Acra Spring 2015 show and, in February, they participated in the American Heart Association’s Go Red for Women fashion show. Last year Vogue asked Mayhem to promote the Met Gala by recreating iconic outfits from past galas and modelling them on Instagram—not too shabby for a preschooler. Keiser thinks their story has been embraced by the masses because of its feel-good factor. “It touches so many parents because they see a relationship—a mother and daughter spending time together every day, having fun and not spending any money doing so,” she says. A quick Google search or even a peek at Instagram reveals countless kids like Mayhem who have captured audiences with their free-spirited nature and style sensibility. Of course, said style is often an extension of mom’s.

One of these cuties is London Scout, a Montreal-born, Brooklyn-based three-year-old with nearly 75,000 Instagram followers. “Part-time ballerina & world’s first mini fashion blogger,” reads her Insta bio, with a link to her site. London models and has an agent, but it’s a combination of her adorable face and drool-worthy ensembles that have people clicking “Like” in spades. Her mother, Sai De Silva, started a dedicated Instagram for photos of her daughter in 2012 as a means to stop over-sharing on Facebook (“I became that annoying mom!” she jokes). Within months, she gained thousands of followers and the attention of high-end labels—including Stella McCartney Kids and Mackage—many of whom gift London with clothes in hopes of being tagged on her various social media outlets. Earlier this year, London collaborated with Barneys to produce a fashion diary for Petite Parade, a kids’ version of fashion week in New York (she acted as style correspondent for Barneys blog The Window). De Silva says she plans to take London to New York Fashion Week in the fall.

“Ten years ago, you wouldn’t have seen a child attending fashion shows. Now, it’s totally normal,” says Petite Parade co-founder Tiziana Indelicato. “There’s been a big cultural change, which we absolutely love. It has a lot to do with celebrities—like Nicole Richie and Heidi Klum—exposing their kids more. They’re big influencers in our culture.” The biannual event, now in its fifth year, includes kiddie fashion shows by the likes of Chloé, Diesel and Bonnie Young (former senior creative director at Donna Karan). “Even if a child is walking the wrong way, the audience just smiles and laughs—it makes it fun for everyone,” she says.

Many children walking the Petite Parade runways have some seriously impressive accomplishments and aspirations. Chloe Dee Cheung, for example, is an eight-year-old model and Olympic figure-skating hopeful who also has her own style blog, Chloe’s Mini Voguish Diary, about kids’ fashion trends (“My interest in fashion comes from being a model since the age of four, and I am blessed to have worked with world-renowned photographers, top stylists and crazy makeup artists,” she writes on her site). Chloe offers styling tips and posts photographs of herself in different high-low outfits (think a Missoni dress paired with Converse shoes).

Back in 2009, it was jarring to see fashion blogger Tavi Gevinson sitting front row at the couture collections at the age of 13. She was one of the first young girls to make a name for herself in the fashion world after starting her famous Style Rookie blog when she was only 11. By today’s standards, that’s ancient. Nowadays kids are called fashion bloggers long before they’re able to spell. Despite what some people may think about these mini fashion stars, one thing’s for certain: They are garnering the most attention—from press, designers and even skeptics. Because, seriously, can you really fault a three-year-old for her impeccable street style? 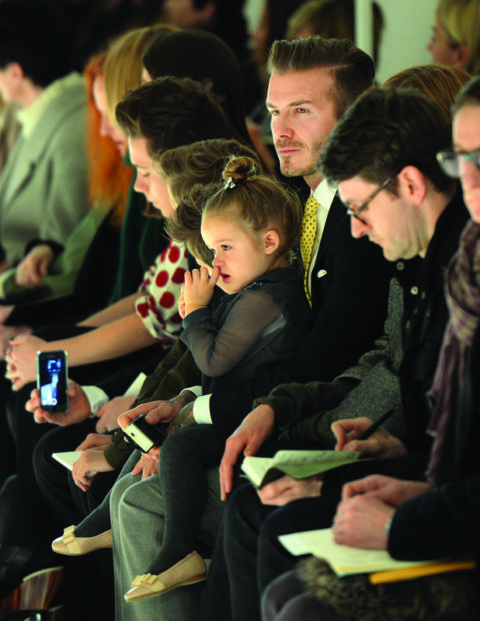 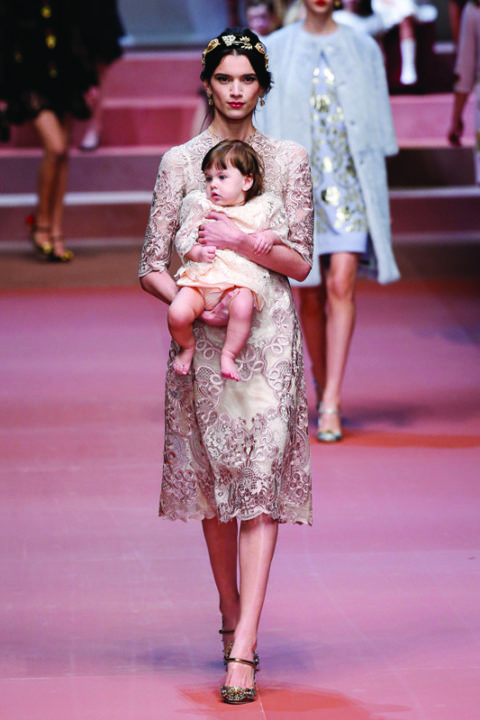 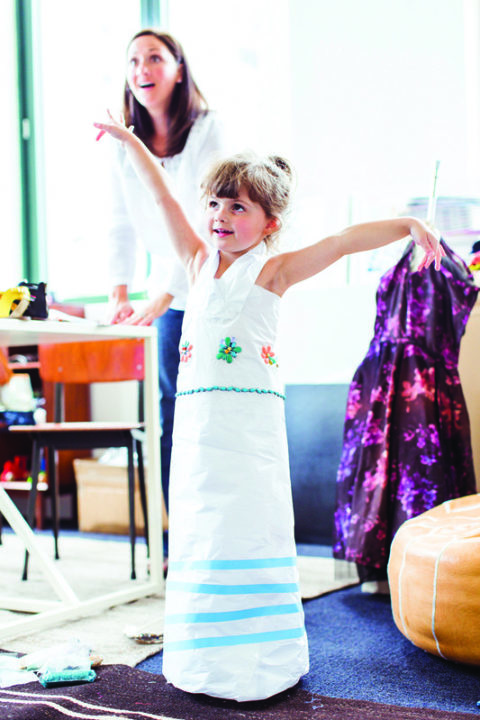 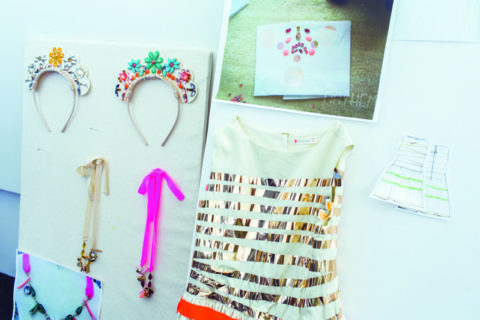 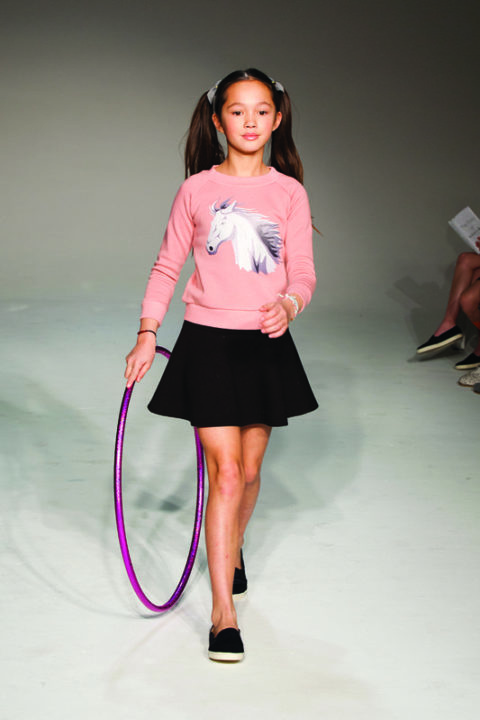 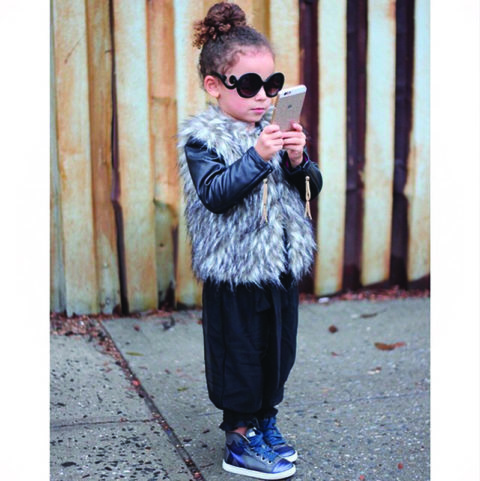 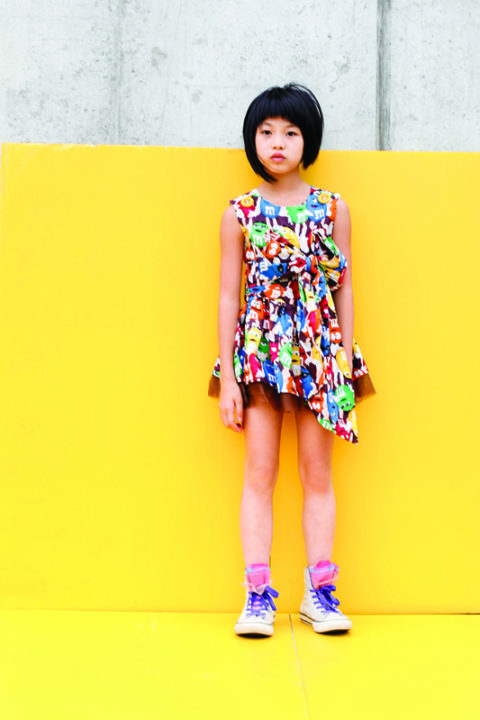 Mayhem in one of her paper creations

Mayhem’s mood board for her Crewcuts capsule collection

London Scout preps for a selfie