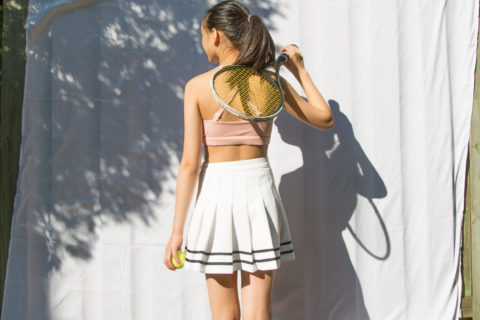 “We thought, why don’t we make that difference for those girls?”

For many young female-identifying shoppers, the experience of buying a first bra is daunting. Not only is it an unfamiliar product category to explore, but the messaging around such items — either hyper-sexualized à la Victoria’s Secret, or woefully juvenile — can be a turn-off to anyone who already feels caught between the identities of adolescent and adult.

Two recent Western University grads, Chloe Beaudoin and Jessica Miao, had their own struggles as tweens while trying to find undergarments that were relevant to both their needs and tastes, and more recently, Jessica’s sister was also finding it difficult to seek out a bra that spoke to her. And it prompted them to launch Apricotton, a forward-thinking brand that puts the wants of its young customers first.

“We were discussing it one day [and realized] there hadn’t been any innovation in the bra industry in decades,” recalls Beaudoin of the ideation for the label, which launched last November. “We thought, why don’t we make that difference for those girls?”

Both Beaudoin and Miao studied business while at university, but admit that their interest in fashion motivated them to be more active in the design elements of their fledgling company. They also went straight to the source for suggestions. Jessica took her sister “shopping” to determine what bra styles she was drawn to, and found ones that were white, tan and black, didn’t have rounded cups, and had thinner straps were most appealing.

“We took all those elements to use in our designs,” Miao says. Apricotton’s current selection of three underwire-free styles boast removable padding, convertible straps, and a moisture-wicking fabric that stretches to fit; they also sell a scrunchie bundle. And they’re working on new pieces to launch later this spring. “We’re excited for what’s coming next,” Beaudoin shares.

Apricotton fans — and those new to the brand — should be equally enthused. Initially gathering information from the young women around them for feedback, the duo have been able to augment their understanding of what their customers want thanks to the connectivity afforded by the social media sphere. “We don’t want to be seen as just another bra brand,” Beaudoin notes. “We want to help girls feel confident while going through an awkward stage.”

This has spurred them on to create thoughtful content for their community, ranging from advice on handling peer pressure and bra shopping tips for transgender teens to home remedies for period pain. There’s a level of trust, empathy and awareness exuded by Apricotton’s efforts that’s undeniable. And Miao adds that they receive countless messages from customers and their parents, with one mom stating that she cried when her daughter put one of their styles on as they’d been searching for the right bra for so long.

Beaudoin and Miao’s inherent understanding of the issues around the tween and teen experience has been a boon to them on the business side as well, helping them to combat imposter syndrome and intimidation since they’ve lived the experience they’re now working to change.

“A lot of the time we’d be pitching our idea to men, which we were scared about,” Beaudoin says of the brand’s start. “Of course, men don’t understand bra shopping, and bra shopping for tweens is a taboo topic to talk about. We’d get nervous having to pitch in front of them. But we got a lot of positive feedback from them because they didn’t even understand this was an issue. Being able to explain it through a story — that we’ve gone through this, Jessica’s sister is going through this, and millions of girls are going through this right now — makes it easier for them to visualize, and the solution is easier than people think. It’s just that no one has ever thought of the tweens first. We’re putting these girls first.”

Beaudoin and Miao are also actively part of a “first” with the launch of their brand, and have this to share with anyone considering taking the plunge into entrepreneurialism. “I think the biggest thing that might stop someone from pursuing their idea is thinking they don’t have the expertise,” Miao says, addressing how vital crowdsourcing, finding mentors and connecting with fellow entrepreneurs was, and is, for building Apricotton. “We didn’t have a fashion background but we were able to do it.”

Chloe adds that it’s perhaps because of this that they have found success. “It was nerve-wracking,” she says about tailoring their brand to craft seasonless pieces that are more about function than trend. “It’s not about the ‘fashion’ of it, it’s about how it makes someone feel.”

Photography courtesy of Apricotton
Get the best of FASHION in your inbox Thanks for signing up!
The latest fashion, beauty and celeb news delivered right to your email #FASHIONforall Now, check your inbox to complete your subscription
We won’t ever use your email address for anything else
Want even more FASHION? Follow us on social media.