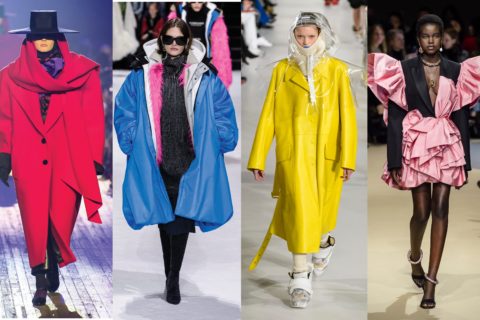 Fashion is the armour to survive the reality of everyday life,” remarked Bill Cunningham, the legendary photog­rapher who documented the sacred and profane of New York City street style until his death in 2016. His words seem all the more poignant in these unhinged times where fake news is abundant and senseless acts of violence, like the Toronto van attack, appear to be on the rise.

The fashion scribes at Vogue.com even coined the neologism “warcore” to capture the apocalyptic mood that inspired designers to create hazmat gear, balaclavas and army fatigues. But while some labels, like Neek Lurk’s Anti Social Social Club, have taken to producing riot shields, others are finding inspiration in the untamed world of predator-prey interactions.

The denizens of the animal kingdom have evolved a myriad of freaky bodily functions to ward off would-be attackers: In the avian world, young Eurasian rollers vomit a foul-smelling orange fluid onto themselves when they become frightened. Golden poison frogs advertise their noxious qualities via conspicuous colouring, a trait scientists refer to as “aposematism.” Though humans are technically classified as “superpredators,” the only physical method we have of warding off attackers—barring brute force and actual weapons—is our clothes.

“Predator and prey dynamics are ubiquitous,” says Dr. Matt McElroy, a post-doctoral researcher studying evolutionary biology at University of California, Berkeley. “Besides elephants, there aren’t a lot of animals that don’t have to deal with being a predator or being a prey item or both. It’s a really important thing that pretty much all organisms have to deal with.” It’s that protective and aposematic instinct that designers seem to be tapping into in response to the current dystopian mindset.

At Alberta Ferretti, hard gold studs mingled with impenetrable leather to cultivate the tough, barrier-like exterior of a pangolin or an armadillo. When asked to describe the collection, Ferretti told Vogue Runway: “Women today have changed, and fashion needs to speak in a different way. It shouldn’t be so correct; it should show personality.”

At Alexander McQueen, two large pink puffs emerged from the shoulders of a suit jacket-dress hybrid, mimicking the aggressive mantle of a frilled lizard, an otherwise inconspicuous reptile native to Australia. The collection also featured plenty of Batesian mimicry—the term for when species assume the visual characteristics of more toxic variants—in the highly stylized butterfly patterns splashed on dresses and skirts.

“Designers appear to have assumed a fight-or-flight response to these uncertain times, which, to some—especially those with a flair for the dramatic—look a lot like the end of days,” writes critic Alexander Fury, chief fashion correspondent for The New York Times’s T Magazine.

Pneumatic blazers and denim puffer jackets at Balenciaga as well as the gargantuan outerwear at Marc Jacobs assumed the billowing proportions of the puffer fish, a sea creature that swallows copious amounts of water to inflate its body like a helium balloon so it’s harder to eat. “Fashion is a reflection of the way we live. I wanted to create a feeling that something dangerous was going to happen,” designer Demna Gvasalia told T Magazine when asked to describe his inspiration.

That dark and foreboding mood was also felt at Prada, Missoni and Calvin Klein, where the guile of night and its potential lurking dangers were never far from mind. Miuccia Prada described her collection—a mix of sci-fi workwear with predator-warning fluoro accents—as a feminist statement. “My dream is for women to be able to go out in the street and not be afraid,” she said. “I wanted to have the freedom exaggerated.”

Missoni held its show in an old warehouse lit with ominous red laser beams. The models sashayed down a dark and flooded cracked-concrete catwalk, boldly dragging their oversized knit pieces through puddles. Their insouciant mood—and the talismans on their wrists—telegraphed a “take back the night” defiance.

There was a similar vibe at Maison Margiela, where transparent PVC helmets formed a protective bubble around models’ heads, reminiscent of the mucous shield that parrotfish emit to protect themselves from parasites. The end-of-the-world aesthetic was also echoed in Margiela’s couture collection, where models were swaddled in tulle sheaths and protect­ive plastic shells. John Galliano said he was drawn to the idea of “creating your own world within a world that’s very troubled at the moment.”

It’s clear that the frothy escapism of seasons past has come to a startling halt. Clothes that challenge the notion of conventional attractiveness have long been the province of avant-garde labels like Comme des Garçons, whose 1997 “lumps and bumps” collection used padding to form unsightly tumour-like growths, or Maison Margiela, whose cloven-hoofed tabi boots, first introduced in 1989, have simultaneously entranced and repulsed the fashion crowd for three decades.

But this season, the inherent ugliness is less a rejection of sex and more a depiction of outright hostility. Designers are on an apparent mass mission to make women look as imposing as possible, demonstrating that fabric, shapes and colours can be antagonistic. Clothes are no longer a maraschino cherry garnish for the feminine body but rather a potential weapon or blockade. They are, in essence, the new armour.

“The world is full of hostile exploiters trying to take full advantage of their resources,” begins a chapter in the evolutionary biology book Individual Behaviour and Community Dynamics. The sentiment is meant to describe the competitive world of predator-prey interactions, but it could just as well serve as an accurate description of the world today. According to common wisdom, predators prey on weaker species, but hostile human exploiters might be in for a big surprise.