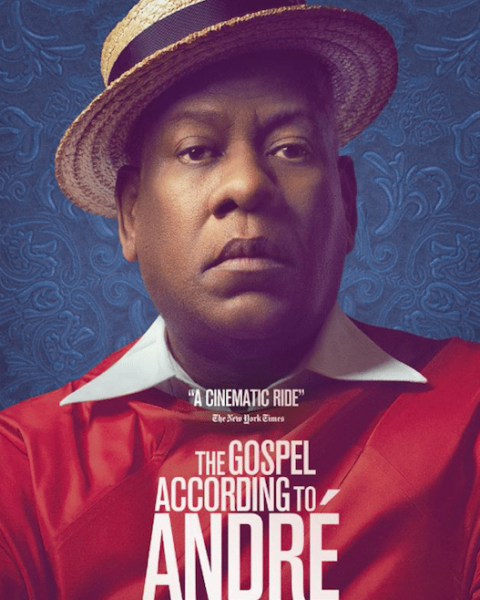 One of my favourite “Mondays with André” on Vogue.com is a 2013 interview André Leon Talley (ALT) did with designer Tom Ford. It was shortly after Ford’s son was born, and when the designer mentions changing diapers, Talley’s eyes widen with shock—not disgust (OK, maybe a little disgust) but shock. “Are they made of broadcloth?” he asks, referring to the cotton fabric often used to make shirts, dresses and sleepwear. It’s a funny and cerebral exchange all in one.

Though Talley was a rarefied editor for fashion bibles like Interview, Women’s Wear Daily and Vogue, it’s the camera that brought him mass fame as the judge with the scathing tongue on America’s Next Top Model for four seasons. Now 68, he’s the subject of filmmaker Kate Novack’s documentary The Gospel According to André—in which Ford also appears—which tracks Talley’s rise from proud yet humble beginnings in racially divided South Carolina to the runways of Paris, Milan and New York.

While in Toronto for the Toronto International Film Festival, where the documentary premiered ahead of its spring release, Talley was resplendent in a gold lamé Ralph Rucci caftan and Gucci horsebit slip-on loafers, but he was also slightly daunting: I’d just overheard him yelling at someone on the phone while waiting for my interview slot to come up. But after watching this powerhouse tear up on camera as he reflected on his personal brushes with racism when he was a young man and then an established editor, I now have a new view on ALT. He made it look easy, but it wasn’t.

In the documentary, you say you couldn’t be good—you had to be better.

“It came from my upbringing and my public school training. I had the best teachers—it was an excellent education. We were taught that we had to be the best. It was a great public high school. It had fabulous teachers who’d had fabulous experiences. That helped me a great deal. As a young person, I had role models I really looked up to. My English teacher, my French teacher…. My English teacher is in the film. I’m happy she’s in the film.”

You went to Brown University and then, in 1974, moved to New York. Which was more significant: going to Brown or moving to New York?

“Both were very significant.”

When you went to New York, did you want to be in fashion?

“I wanted to be in fashion. I wanted to go there for fashion. I met Andy Warhol. My first job was at Interview. I met my great mentor Mrs. Vreeland [Diana Vreeland, former editor-in-chief of Vogue] in October of 1974 and volunteered at the [Metropolitan] Museum of Art with her.”

Do you have a relationship with anyone like the one you had with Mrs. Vreeland?

“No. I mentor many people but not a long, personal relationship. I’ve had many people that I’ve mentored. It’s a string of people, not just one person.”

“The last time I was in Paris was for Kim Kardashian’s wedding. I wish I could get to Paris. I miss it a lot.

You moved to Paris next. Were you more prepared to go to Paris at that time?

“I was afraid of going to Paris, but I knew I had to go.”

“I was afraid, but I had to take the risk, and I never regretted it. My Paris life was wonderful. I had great friends, like Paloma Picasso and Betty Catroux. Betty’s in the film. All those people helped me.”

Fran Lebowitz said you were part of the New York landscape.

Do you ever get back to Paris?

“The last time I was in Paris was for Kim Kardashian’s wedding. I wish I could get to Paris. I miss it a lot. It’s very inspiring. The light of the buildings and walking down the streets is just a beautiful thing [to do] on a spring day. Going to a bookstore, having a cup of hot chocolate at your favourite restaurant…it’s all very important.”

“I follow it but from a distance. I’m very aware of what’s going on in fashion. I do occasionally read the reviews. I sadly miss fashion, but I don’t miss the shows or the rigorous schedule. I keep up; I don’t say ‘I’m out of fashion. I’m bored with it.’ I did a Vogue podcast. I keep up with people. It’s still very much a part of me.”

Who excites you now?

“I’m a very big fan of Norma Kamali. She’s a great American designer who often doesn’t get her due credit.”

What do you think will happen to magazines?

“Who knows what the future of magazines will be? I don’t know. I can’t predict it.”

Do you still love them?

Tom Ford said that you’re part of a generation of fashion editors who really know the history. Is that the case now?

“I don’t think people necessarily embrace that. I think Condé Nast still has people who have that special skill [of being able] to put it in the context of history and cultural relevance. People want the instant gratification of social media: Twitter, Facebook and Instagram. That’s what they respond to today. It’s a fast-moving, fast-track world.”

Is there a collection of your writings?

“No.Someone else can put it together. I think that’s a good idea.”

I hope I get credit.

“You will get credit. I have a box of emails a friend sent me at Christmas. It’s such a big, heavy box. She said, ‘You should just publish my emails.’”

See The Gospel According to André trailer below.