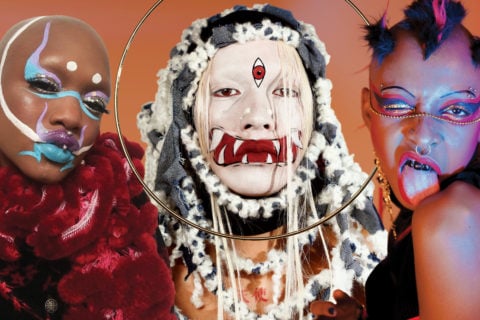 "With gender fluidity and trans and non-binary identities becoming more accepted, the nature of the body one is born in is being called into question."

Hannah Rose Dalton and Steven Raj Bhaskaran have 400K followers on their joint Instagram account. The Montreal-based couple, aged 23 and 25 respectively, met in LaSalle College’s fashion design program back in 2014. They connected instantly, each saying they felt immensely understood in a way they hadn’t before their initial meeting.

But rather than the poised bikini shots on far-flung tropical beaches or envy-inducing #couplegoals content you’d expect from social media soulmates, the pair’s popular feed features demonic-looking coloured contacts, feet contorted into stiletto shapes and stripper heels paired with medical neck braces. Under the moniker Fecal Matter (@matieresfecales), Dalton and Bhaskaran are spearheading a new standard of beauty that can only be described as “freaky alien cyborg”—and even that barely begins to capture it.

Still just an alien couple out and about

Incorporating non-human elements such as reptilian eyes, fleshy horns and braids that resemble antennae, Fecal Matter is part of a growing cohort of people who are swapping smoky eyes for rings of red shadow, concealer for seeping wounds and contouring for straight-up Photoshop. Their unnerving looks, which take up to four hours to craft, come from something inside them that they had previously repressed, the couple write via email. Teetering on the margin of what is socially acceptable, the mutant cyborg aesthetic not only upends the traditional purpose of makeup but also challenges the very concept of what it means to be human.

“I like being a completely unfathomable being,” says Zah, a 24-year-old fashion designer and musician based in New York who paints ancillary eyeballs and gnashing teeth on their face. (Zah uses non-binary pronouns.) “Society typically sees queers and people of colour as less human anyway.” So Zah, who goes exclusively by the mononym, chooses to channel this internalized sense of alienation toward creating monstrous personas that incorporate spirits and ghosts from Japanese folklore. “Sometimes I feel more like these spirits I portray, trying to be human, [than] what I was born as.”

If makeup was initially conceived to hide imperfections and enhance physical beauty, these nightmare-inducing looks are put together without a whiff of concern for the beauty standards that have policed women’s self-presentation since skin-lightening lead powders first made their appearance in ancient Greece. Tomasyn Hayes, 22, a New York-based artist who goes by @lustsickpuppy on Instagram and resembles a cross between an insect and the Queen of the Damned, sees her extreme makeup routine as a form of shape-shifting. “I think that we all have an immense range of emotions inside of us and at times we don’t allow ourselves to express those emotions because the world will only accept so many,” she says. By creating looks that involve bleeding gums, smeared lipstick and flecks of mould, she’s able to channel her emotions and present them outwardly as a comfortable form of self-expression.

“When I was a kid, I started doing makeup just to appease my classmates so I could be the prettier girl and get more attention—of course it didn’t work,” says Elle Vatel, a 19-year-old college student from Florida who goes by @uggiebbyboy on Instagram. Instead, Vatel, who uses he/him pronouns, began to develop his own unique style of doing makeup that involves sprays of confetti, clusters of undulating lines and fortuitous daubs of colour deposited with precious little regard for the orthodoxy of human features.

“We’re living through a time now where diversity is the mantra of the younger generation,” says Philip Fimmano, trend analyst and director of trend forecasting agency Trend Union North America. “Regardless of your paraphernalia or fetish, everybody is allowed to publicly display it and feel comfortable with it.” Fimmano adds that anyone born after 9/11 has only ever known the world in the context of economic collapse, with fear of terrorism and airborne diseases and climate change permeating the global consciousness. These harsh social conditions coupled with a growing yen for diversity have created the perfect climate in which these transgressive looks can thrive.

Indeed, with gender fluidity and trans and non-binary identities becoming more accepted, the nature of the body one is born in is being called into question. Many of the people who replicate the mutant cyborg aesthetic find their human bodies fundamentally oppressive.

“I was born in a human body with very specific limitations,” says Hayes, who characterizes her self-expression as a way of transcending her anatomy. “Growing up, I really admired tattoos and piercings, but dyeing your hair only allows for so much modification.” By playing around with clownlike face paint and pointy elf ears, “you are truly redefining what it means to be human [in a way] that is commonly accessible,” she says.

While these looks are unconventional, they aren’t exactly unprecedented. Fimmano cites instances of extreme body modification that cropped up in the late ’90s and early 2000s, noting that subdermal horn implants were a potential forebear of this trend. The biggest difference, he says, is that “these fetishes were expressed in a downtown club in some sort of attic or basement, but now that conversation is being had online.”

Perhaps the ascendancy of mutant freaks is less a subversion of beauty than an evolution of it. Those who don colourful contacts in an attempt to transcend their humanity aren’t actively trying to court hostility; rather, they’re trying to make the world a more open-minded place by moulding their outsides to conform to the way they feel on the inside, which, coincidentally, is often scared, anxious and hostile.

“We refuse to comprise our vision of life because society can’t handle it or prefers something ordinary,” suggest Dalton and Bhaskaran. “If it were just an aesthetic lifestyle, we wouldn’t have enough courage to pursue it. But because it’s our journey of translating our authentic selves into our lifestyle, it’s actually very easy. All we have to do is be ourselves and not be afraid. For us, it’s either that or die.”