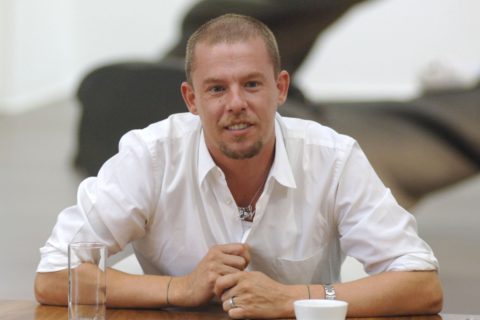 The Alexander McQueen Documentary is Opening in Canada

"Everything is going so amazingly in his life and this is somebody who just soared, and you think, 'What happened?'"

One could argue that a great documentary is far harder to make than a great film. When you watch a doc, you generally know the subject matter, the storyline and maybe even the outcome. Which is part of what makes the new documentary McQueen (at select theatres in early August) about the late designer, Alexander McQueen, so impressive. The aforementioned three boxes are checked, yet this evocative film elicits open mouth surprise at certain points, and in the end, extreme sadness, as loved ones from within the designer’s inner circle reflect on their time with him. McQueen was at the peak of his career, just 40, when he took his life in 2010, the day before his own mother’s funeral.

Directors Peter Ettedgui (whose father Joseph was one of McQueen’s first buyers), and Ian Bonhôte have combined original interviews with archival footage from the mid-90s that capture the rise and the decline in a remarkably objective way. We see charming news reel with McQueen’s mother, Joyce, talking so proudly of her son but also old-school camcorder video (some shot by McQueen himself) of his crew arriving at Givenchy in Paris #purejoy. But there are hard-to-watch scenes too, as when McQueen is being interviewed after a show, presumably under the influence of something–he sweats profusely and grinds his teeth.

McQueen at home with his dogs, or glimpses of his working-class family backstage at fashion week is what sheds the most light on the softer soul. In fact, the most affecting interviews are the ones done with sister Janet, and her son Garry, who still appear so raw from the loss.

We spoke with the film’s directors Peter Ettedgui and Ian Bonhôte about McQueen which screens in select theatres across Canada in August and September.

Did you know Alexander McQueen?

Peter Ettedgui: I’m not in the fashion industry, but my father was one of the first people to buy McQueen for his Joseph stores in London. It wasn’t like a personal connection for me but I was very aware of McQueen. My dad was involved with both McQueen and Galliano at the same time and these were the young Turks who were revolutionizing the British fashion scene. And I think beyond that, you couldn’t help but read about McQueen. You’d see a tabloid newspaper expressing faux outrage about the fact that there were these “low-cut bumsters.” I remember that vividly, and I remember hearing from my dad, talking about the fact that this guy had trained on Saville Row. He was from a working class, ordinary background. That isn’t the type of background that gets mixed up in the world of fashion. And my uncle, who worked with my father, once told me, of all the people that he ever met, and he met everyone, he said, McQueen was the most genuine, lovely guy.

So interesting given his persona.

Ettedgui: Absolutely. That’s something that we thought about a great deal. Generally, when you come to him, and he’s this kind of rebel who’s out to shock everyone with his dark side and tragic ending to his story. I think, Whoa! But actually, when you get into it and you meet people and you talk to them about him, what comes across is just how much he was loved and how much he inspired the people around him and took them as well as himself, on this extraordinary journey.

Speaking of those people then, the obvious oversight is Sarah Burton. Why was she not involved in this documentary?

Bonhôte: We did talk to the brand and what we were told is that they were looking towards the future. Having done Savage Beauty and some of those shows that was a lot of work, they had done quite a lot of work around McQueen. For us, we are making a film about a man who worked in the fashion industry. It’s not a fashion film, it’s not about the fashion industry, it’s not about the brand, it’s about him as a creative person, his journey.

A lot of people, if they came from the fashion industry, they might have a subjectivity where we, being a bit slightly out of it, we always wanted to make ‘a movie.’ It’s emotion of information, so we try to give the audience an emotional journey. It’s not only about who is in it.

Ettegui: You have to remember, there’s been a lot of sensation written about McQueen, which has made some of the group who were around him, understandably wary. And I think Sarah in particular, has kept a quite dignified silence apart from contributing to Savage Beauty. And when we realized that that was going to be the case and she wasn’t going to open up to us on camera, which is also really difficult. We had to just accept that, and respect it and move on. And we had people from his studio who, at the time, were as important to him as she was and then became after his passing.

Where did all this video footage come from?

Ettegui: We had every single format. We had something like 175 different archive sources. Some were from the obvious places, the broadcasters who shot shows worldwide et cetera, et cetera. And some were very personal. And so that material really came from our interviewees themselves who we’d always ask people if there was anything that they would like to share with us. And fortunately, a few of the contributors were like, ‘I may have a little video tape somewhere.’

We had an interview in L.A. at one point, and I remember you saying, “I can’t wait to tell you what I’ve just seen….”

And what was it?

Bonhôte: It was the opening material [grainy footage of McQueen seated at a table talking to a friend as if in a mock documentary interview].

When I was watching it, with the contributor that kindly shared it with us, it was amazing. As filmmakers to the documentary format, you are allowed to use all those formats. You are allowed to paint the montage of things and just look at it. If you were doing a movie, you might say, ‘Oh it’s underexposed, or the sounds not great.’ Where there it’s actually amazing.

Yes, and there’s no narration right?

Ettedgui: Except Alexander McQueen. I think if you’re making a television documentary, all of the pressures, the time they need to tell the story a certain way, you need to have a narrator. I think with a feature documentary, for me, it’s a little bit like ‘deathly,’ because you then distance your characters and their emotions from the audience because you have somebody who’s mediating. So as much as possible you want to have that direct relationship, and you want to feel like you’re been spoken to directly by the antagonist.

The HIV admission from the nephew, in this film, it felt like a bombshell.

Ettedgui: Yeah, it’s interesting looking at it from my perspective where HIV has not necessarily been normalized but [kind of]. I think at the time, and for someone who came from a working class background, differences not really allowed for. There was an aspect of shame about it. So I think that’s why in a sense it’s always been slightly, sort of vague. I don’t think we prompted Gary to talk about it.

We were trying to unpack a little bit what was happening. Because you think everything is going so amazingly in his life and this is somebody who just soared, and you think, ‘What happened?’ We were aware that, as much as we didn’t want to dwell on the darkness, as filmmakers, we had to look at that question, and we had to ask people why they felt it, why there was a change in him. Why this exuberant person became more and more withdrawn in a way, and suffered from depression so on and so forth. And I think the HIV was definitely one of them. We didn’t want to dwell on it at the same time.

Bonhôte: He worked six years with Lee. He worked within the company.

There’s still a stigma within the gay community about HIV, and we don’t want to talk too much about it. But, my point is that Lee is a very complex character and I think the way we portrayed him, you just can’t pin point one thing. It’s accumulation [of things] and is a lot of aspects that made it tough. At the end of the day I think he made a decision, and nobody made it for him, and I think again, that’s very Lee and we heard that from a lot of people.

McQueen can be seeing in the following cities: