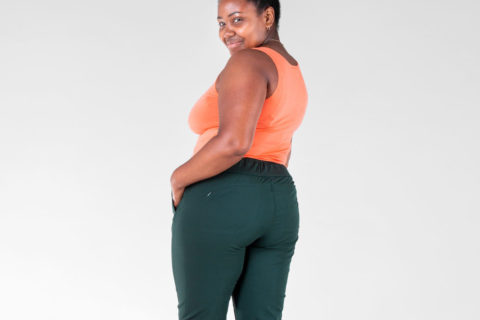 "We want to be part of positive change, and improve the mood of our community.”

There’s been a lot of focus in the last few months about what we’re wearing inside, but given how important it is to get at least 20 minutes of outdoor time every day, the founders of Alder–a Toronto-based recreational apparel line–want you to consider what you’re putting on to head out, too.

An uptick in people visiting their local park versus traveling to far-flung places “aligns with how we’re trying to shift the idea of outdoor recreation,” Wujec adds. “We want to encourage people to take the performance [function] aspect out of the equation, and just get outdoors for peace of mind and for fun.”

Wujec and Blackman began Alder after having conversations about where they felt the outdoor clothing industry was failing themselves and other women. “There’s a lot to be improved in the space,” Wujec notes about the range of product offerings traditionally found in the category, highlighting that Alder’s business is “to have really iterative feedback from our community. We go heavy on surveys and do deep engagement with our customers to find out exactly what they want. And [then we] fill those holes in the market.”

Blackman adds that it’s not just the apparel itself that they felt had miles to go in terms of appeal. The feelings of imposter syndrome that she and Wujec experienced in that they couldn’t truly identify as ‘outdoorsy people’ was also a key factor in how they build the Alder brand. “There’s a shift that needs to be made in that mindset,” she says.

The duo points to the prevailing apparel-related imagery that’s created by outdoor recreation brands, which makes it seem like if you’re not scaling the side of a mountain or doing an arduous hike, you’re not doing it right. “We started not with the intention to be a clothing company and just make clothing, but to change the industry and make outdoor recreation about fun,” says Wujec.

To accomplish this, Alder hires non-professionals to model their wares like the recently re-stocked Open-Air pant that originally launched in July. Instead of seeing them breaking an intense sweat, they’re walking dogs, chilling in canoes and really, just doing them. Blackman adds that she and Wujec recruited their friends to be in the first set of images for Alder, which featured the women simply having fun during an outing to Toronto’s High Park. “It’s not that common to see photography of women enjoying themselves together in the outdoors,” she notes.

Alder is certainly a trailblazer in terms of proposing that anyone and everyone should feel empowered to savour some time in a forest, a park or anywhere else the wind blows; and it’s also one of the few brands across any fashion category that’s open to sharing where and how its pieces are made.

“Sustainability was a non-negotiable for us from the get-go,” says Wujec. “It’s just how the fashion industry should operate.” She says that while it wasn’t possible to travel around the globe to conferences and expos to learn about the array of materials and manufacturing processes addressing the severe environmental and ethical impacts of the garment industry, her academic background drove her to dig into the information she could find online.

Alder very kindly takes that kind of work out of the equation for you; when you visit the brand’s website, you’ll see information about Alder’s fabrics, including modal and recycled nylon, as well as the factories where its products are made. “We can’t feel like our values aren’t aligned in what we’re creating,” says Blackman about why this level of transparency was crucial to include in the company’s ethos.

This model has proven a successful one, with Alder fostering a legion of consumers and admirers of its approach. “We’re at an exciting stage of our product development and expansion right now,” says Wujec. “We’re working on five new products.” She divulges that one of these upcoming releases will be a raincoat, and another is an outdoor dress.

Having things to look forward to is certainly important now more than ever, and Blackman says that while “it’s tough to stay upbeat at this time,” Alder has a following that looks to the brand and its muse–the great outdoors–for comfort and clarity. “What optimism means for me is that you can recognize that there will be some feelings of negativity and not [being] one hundred per cent okay, and that’s okay,” she says. “It’s part of a natural cycle of emotions in life…. We want to be part of positive change, and improve the mood of our community.”

And of course, prioritizing getting some vitamin D is essential for Wujec and Blackman for their own wellbeing. “Outdoor recreation equals happiness,” Blackman says. Thinking about time spent away from devices, work duties and the dire thoughts that accompany our daily lives lately, we couldn’t agree more.

Photography courtesy of Alder.
Get the best of FASHION in your inbox Thanks for signing up!
You’ll get the latest fashion, beauty and celeb news delivered right to your email Now, check your inbox to complete your subscription
We won’t ever use your email address for anything else
Want even more FASHION? Follow us on social media.