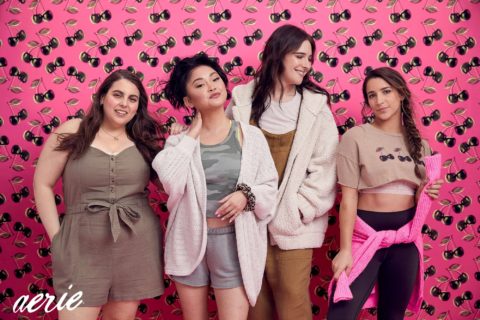 Along with 10 other women, they're this year's #AerieReal Role Models.

In 2014, a time when the term “body positivity” wasn’t quite a part of our lexicon the way it is now, Aerie debuted its #AerieREAL campaign, a revolutionary project that subverted how typical lingerie campaigns are photographed and presented. Shifting away from the airbrushed images that tend to dominate lingerie ads, Aerie decided to eschew retouching and airbrushing in favour of “real” photos of “real” women. Understandably, the campaign received widespread positive feedback, with women taking to social media to share how empowered and confident it made them feel in their own skin.

In the years since, an array of inspiring women across various industries—film, sports, media, fashion and more—have been brought on as the brand’s #AerieREAL Role Models, who embody the spirit of inclusivity, self-love and empowerment that the brand stands for. Previous years’ Role Models include Olympic gymnast Aly Raisman, Canadian YouTuber Molly Burke (both of whom are back this year), as well as actors Jameela Jamil, Yara Shahidi and Samira Wiley.

We’re investing in YOU! Big or small, REAL change is what you make it. That’s why we’re investing $400,000 in grants to empower people just like you. Join your 2020 #AerieREAL Role Models & share how you’re making change—you could win one of 20 $20,000 grants. Share your story & enter now at Aerie.com/REALchange

Condor, who works with The Asia Foundation to help put young Vietnamese women through four years of high school, is looking forward to working with Aerie on some sort of partnership that allows the foundation to extend this support to more girls.

“I really wanted to be able to help in any way that I could and use my voice on their platform, particularly about education, but also just being body positive, which is all about what being a Role Model is,” she tells Fashionista.

I am over the moon to finally announce that I am joining @Aerie as a new #AerieREAL Role Model!!! This campaign is so special to me because it celebrates our natural beauty, unretouched, outside as well as the beauty INSIDE. Being a role model is a dream come true @Aerie not only gives me the power to feel sexy and proud of the skin I’m in, but also gives me a platform to speak about what’s most important to me: loving yourself and others, and the power of education. It’s rare to find a brand that is so devoted to making the world a better more positive place, so this is truly a partnership I cherish. I can’t wait to show you all we have in store! But here’s the first thing: @Aerie is investing in YOU! Share how you’re creating change & you could win one of twenty $20,000 grants. Get more info & enter at Aerie.com/realchange. #AeriePartner

For Feldstein, Aerie’s size-inclusive ethos is one of the things that has long drawn her to the brand.

“I’m most excited about standing amongst really incredible women and being a part of a story that is a story of bodies and the story of voices that is inclusive and diverse and honest and real and looks like everyone that you see around you day-to-day walking on the street,” she says.

Truly so, so excited to be included alongside these inspiring women as one of the #AerieREAL role models for 2020!!! These gals are the REAL deal. They are making the changes they want to see in the world and I couldn’t be more honored to be a part of this group. I've loved Aerie for a long time: they never retouch their photos and all of their clothes are deliciously cozy and all I ever want to be is cozy! ……….. @Aerie is investing in YOU! Share how you’re creating change & you could win one of 20 $20,000 grants. Get more info & enter at Aerie.com/realchange. #AeriePartner

Catch the full campaign and interviews with each of the Role Models here.

Image courtesy Aerie
Get the best of FASHION in your inbox Thanks for signing up!
The latest fashion, beauty and celeb news delivered right to your email #FASHIONforall Now, check your inbox to complete your subscription
We won’t ever use your email address for anything else
Want even more FASHION? Follow us on social media.