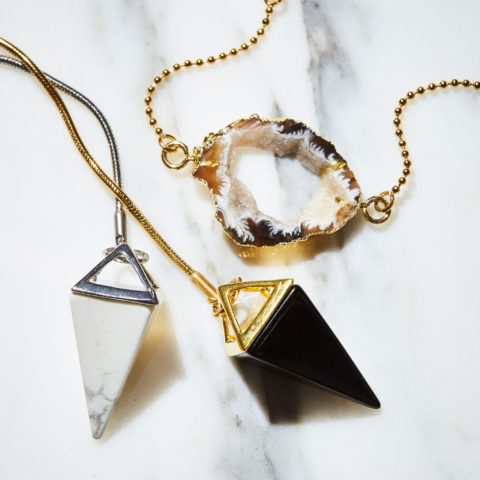 Why You Should Add Crystal Jewellery to Your Wardrobe

Rocking Vibe founder Liana Louzon started playing around with crystals at the age of 14, which is just after she and her family immigrated to Canada from Russia. “I remember how much better I felt when I was playing with crystals,” she says. “Because I had such a language barrier, I learned to communicate through creativity.” At first, she would sew crystals onto pieces of fabric. “The act of touching the crystals was therapeutic for me.”

Louzon, a mom of three children five and under, started her line of crystal jewellery just two years ago, when she turned back to crystals for some stress release. She had been making pieces for herself and her friends already, so why not spread the good vibes a bit further? “Within two hours, the brand evolved in my head,” she says. “The name, the whole concept, the pyramid packaging, the culture—it channelled and within two hours I had the whole concept made up.”

Crystals have long been used for their healing properties. But lately they’ve been lighting up the fashion scene for their mere beauty—forget the vibrational force! While you can be all pseudoscientific about it and choose your crystal based on your ailment—amethyst to help with stress, citrine for clarity, etc.—Louzon advises you to choose your crystal more intuitively. “You don’t need to be knowledgeable about crystals,” she says. “Your body will attract the right crystals. The way people shop for crystals is that they’ll automatically reach for ‘the one.’ If somebody tells you this is your crystal, but you are not drawn to it, it’s not your crystal. We actually often don’t know what we need. Sometimes what we think the issue is, is not the issue. It’s like with modern medicine: If you have a headache, you think you need Tylenol, but you might be dehydrated so you need water.”

During the creative process, every piece starts with a message. Poise, for instance, allows you to approach life with, well, poise. “Something will trigger an idea, it could be my daughter dancing—whatever it is—and I allow it to evolve, and I start playing around,” says Louzon, whose crystals come from all over the world, from Ethiopia to India to Canada. “Then, I grab some chains and some crystals, or I’ll draw it out.”

Louzon’s favourite crystal is clear quartz, she says. “It amplifies whatever you put into it. It can be love or faith or passion or courage.” Those are the same qualities Louzon and her family embraced when they came to Canada over two decades earlier.