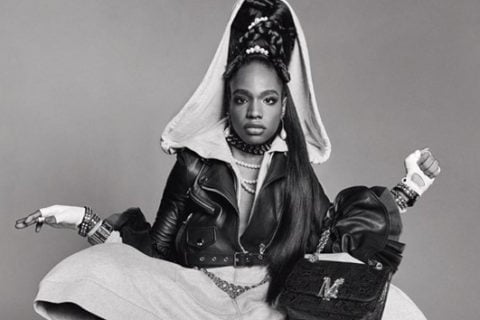 We love to see it.

This week, Jeremy Scott unveiled his fall/winter ad campaign for Moschino, starring model Aaron Philip. The campaign marks the first major high fashion ad campaign for the model – and a major moment for representation in the industry.

Philip first made headlines back in 2018 when she was the first Black, trans and physically disabled model to be signed to Elite Model Management New York. Since then she has appeared in campaigns for Sephora and Nike, a Miley Cyrus film clip, on a digital runway for Collina Strada and more. Taking to Instagram to share her excitement about being cast in the campaign, Philip wrote, “I made it this far. idk what to say I’m just so grateful and love everybody involved with all my heart.” Zendaya, Indya Moore (who recently walked their first runway for Jason Wu at NYFW), Jameela Jamil and Munroe Bergdorf were among the 800-plus people who commented on the post.

@moschino fw20 campaign by @luigiandiango @georgisandev @naominailsnyc – MY FIRST MAJOR HIGH FASHION CAMPAIGN. i made it this far. idk what to say i’m just so grateful and love everybody involved with all my heart. i love you so much @itsjeremyscott ❤️ i love you luigi, iango, georgi, naomi… ?? and my heart is yours @richiekeo @elitenyc ? enjoy everybody

In another post, Philip wrote of the campaign (which was shot by Luigi & Iango), “I’ve been too shell shocked to try and say anything prolific but this is SUCH A BIG DEAL BEING A PHYSICALLY DISABLED PERSON/MODEL IN A CAMPAIGN LIKE THIS. I really am so so very happy and I hope the community is too! This is the start! More REAL space for us.”

This campaign might have been her first, but we suspect it certainly won’t be her last.

Photograph courtesy of Moschino
Trends, beauty secrets, culture & more
Yours for only $1 an issue
Subscribe now!