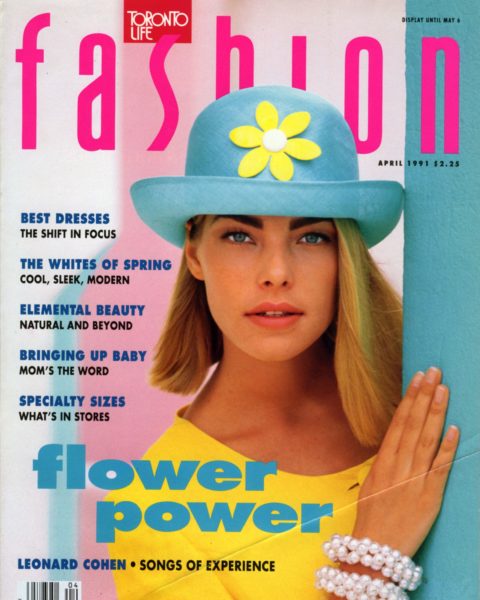 Danielle Scott on the cover of our April 1991 issue. Photography by George Whiteside.
Style

"I used to call it the 'FASHION Magazine School of Modelling' because we would book these young girls from the agencies here and teach them how to model on set. Then, many of them would go off and we'd never see them again."

’90s fashion is back in more ways than one. Yes, we have a renewed sense of appreciation for menswear, velvet, chokers and slip dresses, but fashion is also rediscovering the supermodel. Before celebrity models like Kendall, Karlie and Kaia there was Kate, Christy, Cindy and Naomi. We reconnected with our former team members to talk about everyone’s favourite decade: the ’90s.

“Our team had an eye for spotting great Toronto talent, and the features and imagery we created together are some of the favourites of my career,” remarks former editor-in-chief, Juliet Warkentin. That eye for talent turned out to be essential for FASHION’s success. Before the Internet, access to information, people and clothes was limited by where you were and what you could get your hands on. If you were in New York City, anything was possible.

“It’s quite dramatic the way the industry has changed,” says Catherine Franklin, FASHION’s fashion director from 1987-2001. “We only worked with Canadian talent. Photographers, makeup artists, hair stylists, and fashion designers, they were all Canadian based. And all the models we booked for our editorial pages were local.”

In hindsight, you might call the ’90s a transitionary period. We were starting to get a taste of the digital age, but were still defined by limited (if not nonexistent) access to the (again, limited) exchange of information occurring online. International marketplaces weren’t an option, so Canadians had to work with what we had at home. And we happened to get lucky during the early ’90s.

“When I started working in magazines, there was no way you would ever get samples from New York, but the Canadian design world was quite strong. There were a lot of really talented designers that were making a living in Canada,” Franklin recalls. “There was a time somewhere between five to ten years where there were a lot more Canadian designers producing two collections a year. That’s what we had to use during our photoshoots.”

“We also had amazing access to some really fabulous photographers,” elaborates Joan Harting, FASHION’s editor-in-chief from 1991-2000. “These were really talented people. That’s what was so fun and encouraging about it: the talent level in Toronto.”

Later in the decade, the digital evolution kicked off. Amazon was launched in 1995, FASHIONmagazine.com in 1997 and Google in 1998. According to Stats Canada, the number of Canadian households with a home computer increased from roughly 15 per cent to nearly 60 per cent during the ’90s. The world was becoming more connected and, while that meant FASHION had easier access to a diverse talent pool, it also meant the world had access to the bubble of talent being fostered up north. And the bubble was quick to burst.

“There was this whole pool of talent that grew with us and the industry,” adds Franklin. “I used to call it the ‘FASHION Magazine School of Modelling’ because we would book these young girls from the agencies here and teach them how to model on set. Then, many of them would go off and we’d never see them again. Shalom Harlow was one, Tricia Helfer, Tasha Tilberg and Daria Werbowy—we worked with Daria tons—they would find fame in New York and Europe and rarely come back to work in Canada.”

Photographer George Whiteside shares a similar sentiment. “One of my highlights [working with FASHION] was shooting Shalom Harlow’s first-ever magazine cover,” recalls Whitside. “She had absolutely no modelling experience. I took her down to the beach and shot a couple rolls of film, just to see if she was going to be any good, and I just loved her. We ended up setting up the cover shoot with her. We didn’t even start her with a spread, we went straight for the cover. She did a couple other covers and she was gone.”

“She used the pictures we took with FASHION on her comp card when she first went to Paris and became the girl of the moment,” adds photographer Chris Nicholls.

Harlow—whose first cover you can see in the slideshow below—would prove to be the first of many to go on to huge international success. “I remember working with Daria [Werbowy] when she was very new, had barely done anything,” says Whiteside, who shot nearly 50 FASHION covers between 1990 and 2000. “Daria was awesome. Super smart girl. She was one of those girls who worked very hard right from the beginning. I remember making her do crazy things for shoots.”

Whiteside also photographed Carolyn Murphy, Angie Featherstone and Kirsten Owen for FASHION. “Kirsten was so sweet. I did so many tests with her and I kept trying to get her jobs, but nobody was interested in her in Toronto. So, I said, ‘You’ve got to go to Paris. Get out of here’ And bang, she was super famous right away.”

When the new millennium rolled around, the world was an open marketplace. Global brands and celebrities were becoming  standard fare. For better or for worse, the worlds of FASHION and fashion were on the global stage.

Relive the ’90s at FASHION with our favourite covers of the decade: 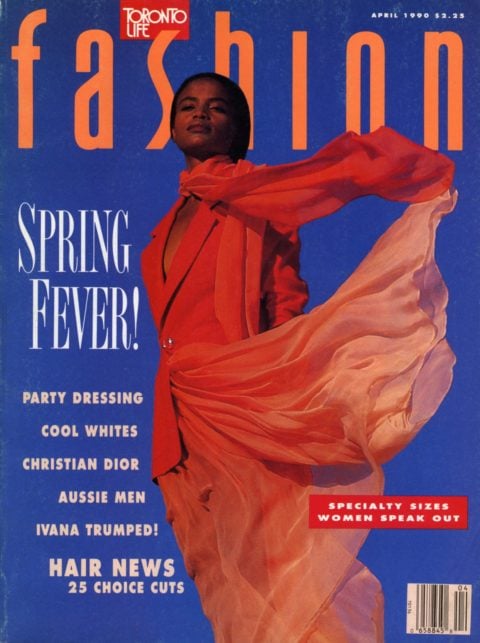 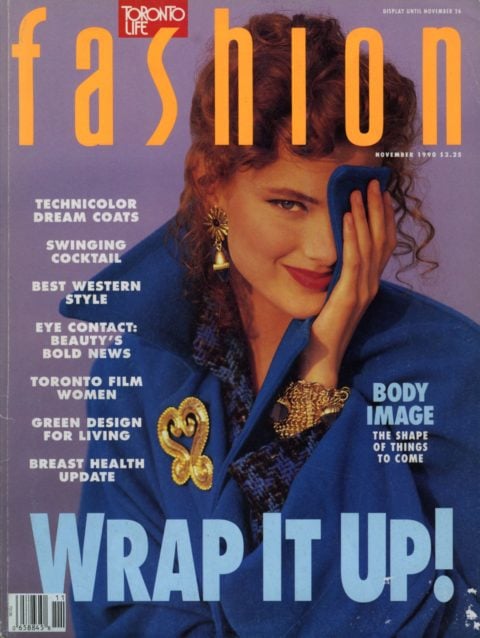 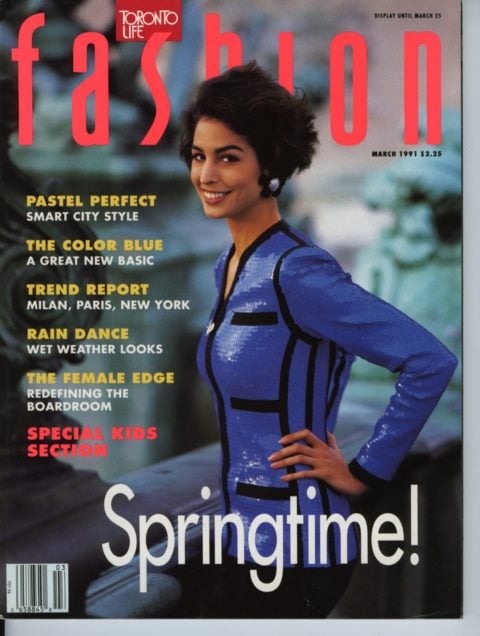 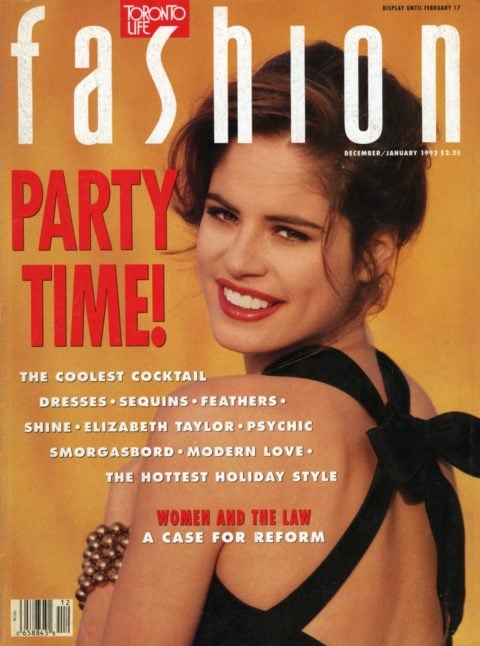 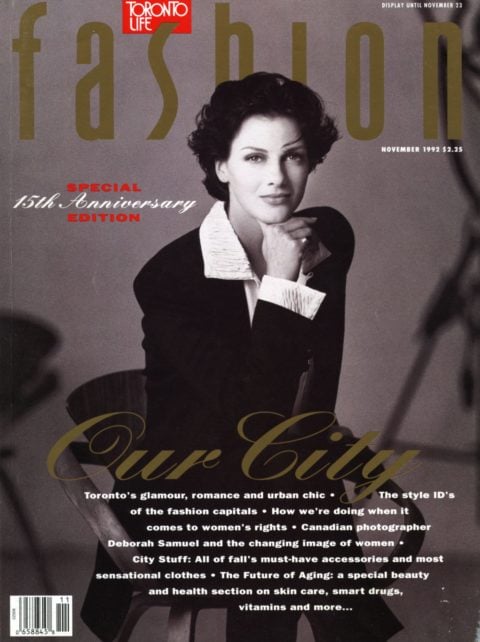 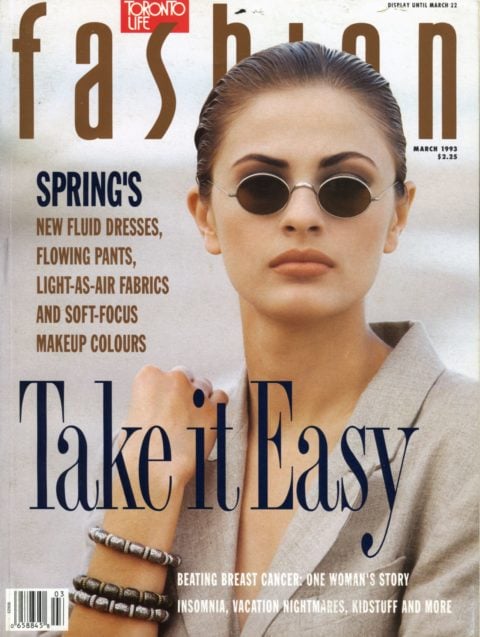 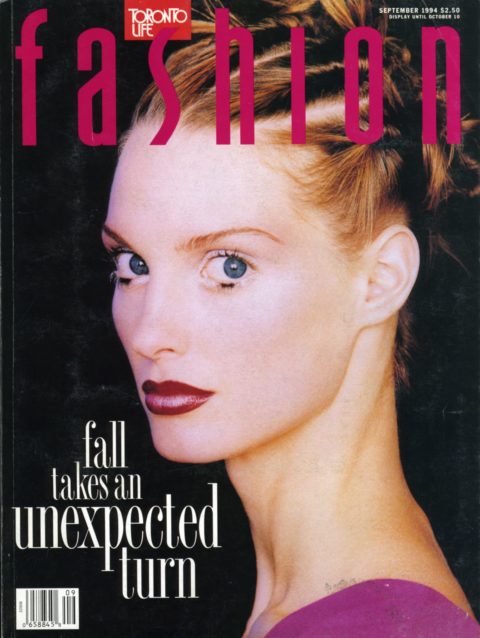 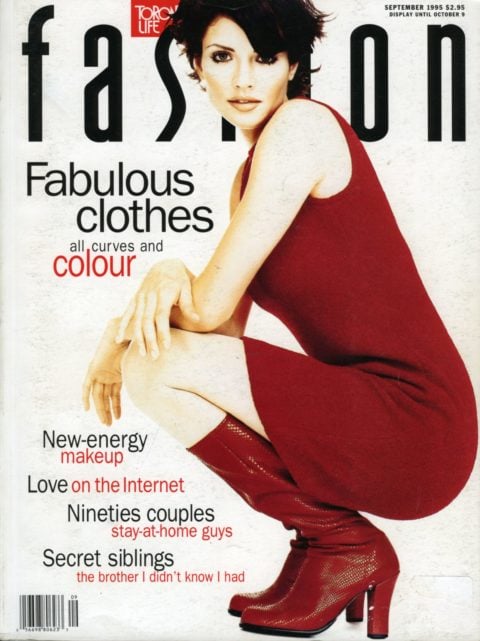 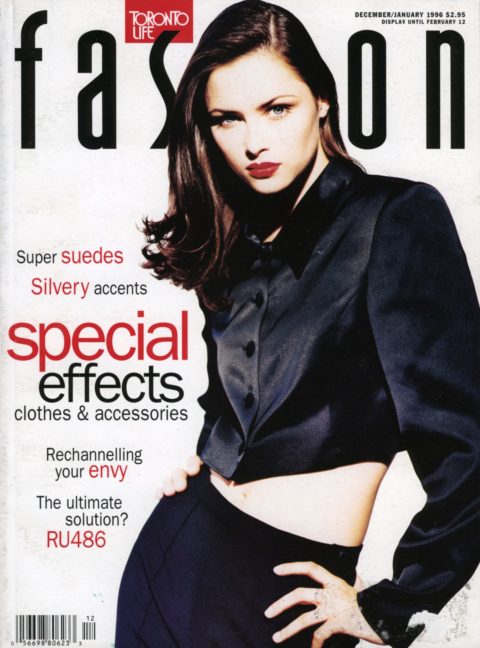 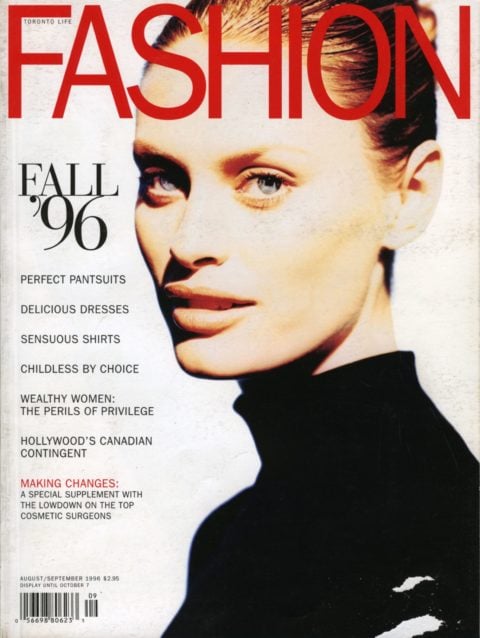 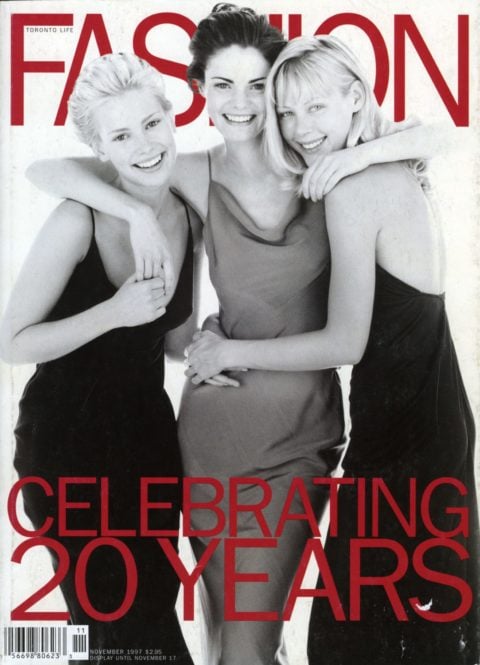 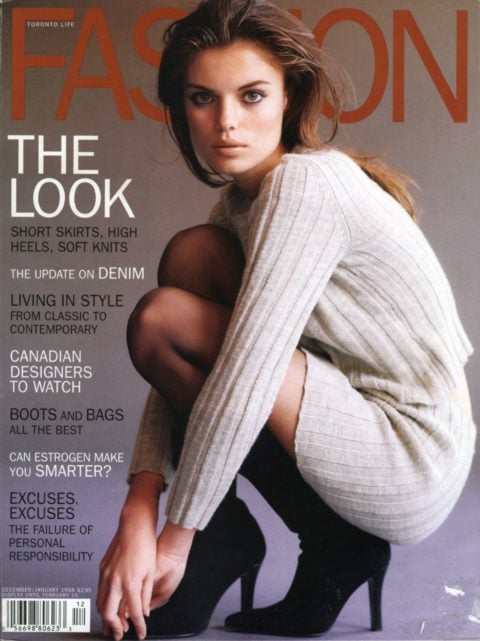 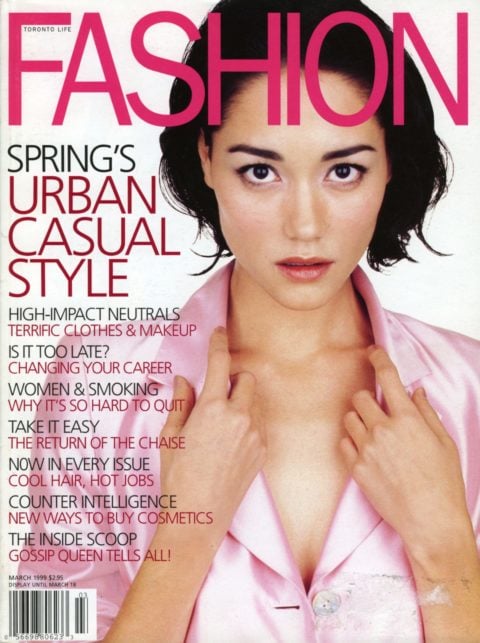 Charmaine on the cover of our April 1990 issue

Shalom Harlow on the cover of our November 1990 issue
“The funny thing [about this photoshoot] was they had also booked my then girlfriend (Meredith Cooper),” says Whiteside. “Shalom picked up on the competition and started flirting outrageously with me. Meredith was at the end of her rope by the end of the day.”

Cara Peloso on the cover of our March 1991 issue

Sara Bolduc on the cover of our December/January 1992 issue

Jayne Craig on the cover of our November 1992 issue
“My first cover was the 10th Anniversary. I had just starting to model in Toronto and that shot was from one of my very first jobs with the magazine. I didn’t know it was going to be a cover and the wow! Pretty amazing when I saw it in the news stands and posters all over the city,” remembers Jayne Craig. “This was my second cover, the 15th anniversary. The Armani suit that Catherine Franklin had picked was exactly what I wish I owned at the time.”

Agnes Budzyn on the cover of our March 1993 issue

Mella on the cover of our September 1994 issue

Jenny Mac on the cover of our September 1995 issue

Tasha Tillberg on the cover of our December/January 1996 issue
“Tasha was awesome. She was a little kooky,” remembers Whiteside. “Once, when we were shooting, she whispered in my ear that she was a vampire.”

Kim Renneberg on the cover of our August/September 1996 issue

Tarina Young, Emma Booth and Jill Jacobi on the cover of our November 1997 issue

Andie on the cover of our December/January 1998 issue

Sandrine Holt on the cover of our March 1999 issue

Danielle Scott on the cover of our April 1991 issue. Photography by George Whiteside.

See other decades at FASHION