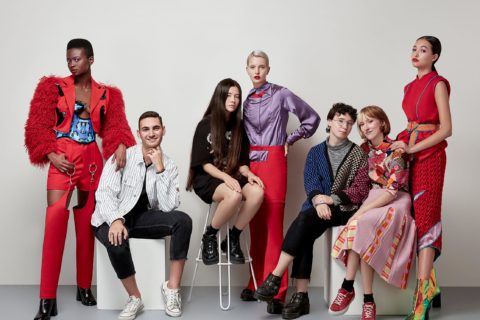 Seeing Red: How Four Designers Took on the Made for All Design Challenge

Four fellows of The Suzanne Rogers Fashion Institute (SRFI) at Toronto’s Ryerson University take inspiration from Maybelline New York’s Made for All lipstick in “Red for Me” for the Made for All Design Challenge.

What do you get when you combine one red lipstick and four designers from the Suzanne Rogers Fashion Institute (SRFI) at Toronto’s Ryerson University? Three red hot looks that celebrate living life out loud, no matter your shape, size or skin colour.

The challenge: We asked four fellows from the SRFI at Ryerson University to create an inclusive look that was made for all women.

The inspiration: Maybelline New York’s Made for All Lipstick in ‘Red For All’.

A book called The Secret Lives of Colour was the starting point for Michal Perelmuter and Julia Payton’s Made for All Design Challenge look. “A section on red led to us thinking about space and Mars and how in space there are endless possibilities,” explains Payton, who was born in St. John’s, N.L. Dreaming about a person in the future who might leave earth to live on Mars, they strove to make pieces that move and change. “It’s all very circular and lumpy—that’s part of the spacey vibe,” adds Perelmuter, who is from Richmond Hill, Ont. The duo have since moved to London, England, to continue their design adventures.

Beauty note: “For Michal and Julia’s look, I really wanted to go with something a little bit campy,” says Grace Lee, lead artist for Maybelline New York. “Their collection has a lot of play on textures, including some latex, so I incorporated colour with several textures on the face. I did a pop of vivid pink on the eyes and then added a gloss just over the eyelid to give it a bit more texture. And really it’s about beautiful skin with the Fit Me foundation and that Made for All lipstick in ‘Red for Me.’”

“I was inspired by Maybelline New York’s Made for All lipstick and the fact that it can work on numerous skin tones,” says Adrian Arnieri of Mississauga, Ont. “That led me to think about the spots and characteristics that differentiate animals from one another. Just like no two people are alike, no two animals are the same.” Arnieri, who, since graduating from Ryerson, has created red-carpet gowns for ET Canada host Sangita Patel, began experimenting with animal prints, landing on a “cow morphed into cheetah” pattern. “For the skirt, I just wanted something with different layers that was flowy and fun. A lot of my silhouettes tend to accentuate a woman’s body no matter what shape or size she is.”

Beauty note: “Adrian’s look was really about glamour and colour,” says Lee. “I was inspired by the ’80s era as well because of the fur and the placement of colour. So I decided to do mauve and purple on the eyes using the Maybelline Soda Pop Palette. And I thought that the purple combined with the ‘Red for Me’ from the Made for All collection was a really beautiful contrast.”

Horror film fan Lynne Hey turned to Dario Argento’s Suspiria and Peter Greenaway’s The Cook, the Thief, His Wife and Her Lover for inspiration since both films use a lot of red. That, along with John Singer Sargent’s Portrait of Mrs Robert Harrison, in which a red cloak tops a white tea gown, led Hey to create pants and a cape with startling cut-outs. “Basically, it’s a lot of drama,” says Hey, who hails from Durban, South Africa. “I just wanted to engulf everything in the colour red. I wanted it to consume the wearer.” After she finishes her degree this spring, Hey would like to continue learning by working under a creative mind such as Miuccia Prada.

Beauty note: “Lynne’s look was definitely the most androgynous of the three,” says Lee. “We kept the face very bare; we just prepped the skin with the Fit Me foundation and made it look flawless and beautiful. We didn’t do much else. There’s no mascara, which is usually a big no-no for me. But it works for this. It really is all about that Made for All lipstick in ‘Red for Me.’ It stands out against the gorgeous skin and the nothingness on the brows and eyes.”

Photography by Carlyle Routh. Styling by eliza grossman. Creative direction by george antonopoulos. Makeup by grace lee. Models’ shoes from left: L’intervalle, $230. Dr. Martens, $255. L’intervalle, $250. Photography: products by daniel harrison; designer portraits by ted belton. Hair, cia mandarello for p1m.ca. photography assistant, Mark Luciani. Models: Madelaine Violi for want management; Mimi keita for next models canada; Jordan Swail for liz Bell/Plutino Models.
Get the best of FASHION in your inbox Thanks for signing up!
You’ll get the latest fashion, beauty and celeb news delivered right to your email Now, check your inbox to complete your subscription
We won’t ever use your email address for anything else
Want even more FASHION? Follow us on social media.