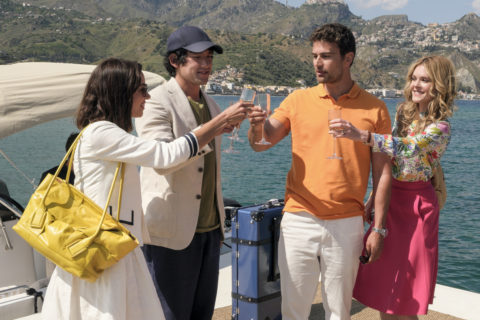 We’re Ready to Check Back Into The White Lotus

We finally know who makes it out of Sicily in season 2 (!) and we have so many questions about 'The White Lotus' season 3. Will Daphne go on a girls' trip? Will we ever see Portia again? Here's everything we know.

Arrivederci, Sicily! It’s been…tense. But also funny, sad, delightful and without a doubt, a fully sensorial experience thanks to that wildly catchy The White Lotus season 2 theme song. I’ve been showering, unloading the dishwasher and scrolling Instagram with the electronic dinger acting as my life soundtrack, and may I just say it’s made the most mundane tasks just a little more fun? Anyway, the great news is that The White Lotus is officially coming back for a third season, so one can safely assume there’ll be a third iteration of the show’s theme song to enjoy. The bad news? No Tanya McQuoid to utter perfect lines like “did you knit your little cap?” Here’s what we know about The White Lotus season 3.

Where will The White Lotus season 3 take place?

The fancy locale of the third season’s fictional White Lotus resort is unknown, but that hasn’t stopped people from speculating.

Series creator Mike White hinted at some possible locations in an interview with Deadline back in October, before season 3 was even official, suggesting that it would be interesting to go to a whole new continent, like Asia. “I think it’d be fun to maybe go to a whole different continent. You know, we did Europe… maybe Asia, something crazy like that, that would be fun.”

A thread on Reddit suggests that The White Lotus season 3 could unfold in Japan or India, both popular suggestions on social media that track with White’s comments.

Will any of the characters from The White Lotus season 2 be back for season 3?

That remains to be seen, but given White’s record of having just two characters from season 1 return for season 2 (Tanya McQuiod, played masterfully by the iconic Jennifer Coolidge, and her new husband Greg, played by Jon Gries), it suggests he could do something similar in season 3. Now (SPOILER!) fans know from watching the season 2 finale that (seriously, spoiler!) our beloved Tanya can’t return, but it does leave some loose ends when it comes to her story. As writer Paul Tassi theorizes for Forbes, this isn’t the last we’ve seen of sinister Greg, who Tassi suggests is a “super villain” in The White Lotus universe.

“While we knew that at least one storyline would carry over from season 1 when we saw that Tanya was returning for season 2, in the wake of the finale which ends with Tanya’s death as she tries to escape an elaborate scheme to murder her and take her fortune, what’s been revealed is that The White Lotus universe may have a larger, over-arching, sinister plot, one that we may see continue when season 3 arrives next time,” writes Tassi.

By extension, this supports the idea that we also haven’t seen the last of Portia, who is the only living person (aside from the dude that jumped off Quentin’s yacht) who can connect the dots between Greg and Tanya’s death, with Tassi also theorizing that Quentin’s “nephew” Jack was meant to kill Portia, but instead let her go at the last second. “In the closing moments of the show, Jack warns Portia not to mess with the ‘powerful people’ he works for,” write Tassi, “including his uncle, but by proxy, that includes Greg, Tanya’s husband who now apparently inherits all of her vast fortune in the wake of her death.”

When will The White Lotus season 3 be released?

While a premiere date for the show’s third season hasn’t been announced, the short amount of time between seasons 1 and 2 suggests viewers could be watching guests could be checking into The White Lotus as soon as fall 2023.

What are some theories about the plot of The White Lotus season 3?

In addition to the continuation of the evil Greg plot mentioned above, there have been lots of theories thrown around about season 3. One popular one is that we’ll see Daphne Sullivan, the more-than-meets-the-eye wife of certified douchebag finance bro Cameron, head off on a luxurious girls’ trip. Immediately, yes! While we’re here, let’s take a moment to appreciate the excellent acting skills of Meghann Fahy, the anti-long-suffering wife:

Meghann Fahy is SUCH a good actor. these 30 seconds of Daphne processing her husband’s affair (and then calculating how she’s gonna get back at him) are perfection#TheWhiteLotus pic.twitter.com/razdMtDu5G

Naturally, if The White Lotus season 3 sees Daphne and her suitcase full of cropped corset tops host a lush girls’ vacay, Harper has to be on the guest list and then, if we’re lucky, they both divorce their husbands when they get home.

On the topic of Daphne, Forbes writer Tassi points out that the aforementioned evil Greg plot also suggests a potential link between awful Greg et al and… d-bag Cameron. “If we’re on the subject of ‘powerful, shady people,’ I also recall what Daphne said about Cameron’s partners, that they were real ‘psychopaths,’ and also some of the most powerful people in finance,” writes Tassi.“ While we have no direct link between them and Greg, I do wonder if there is literally some sort of evil Legion of Doom being built behind the scenes of The White Lotus with Greg at the apex, which does not seem like such a wild theory after last night.” Whoa.

Photography courtesy of HBO
Get the best of FASHION in your inbox Thanks for signing up!
The latest fashion, beauty and celeb news delivered right to your email #FASHIONforall Now, check your inbox to complete your subscription
We won’t ever use your email address for anything else
Want even more FASHION? Follow us on social media.