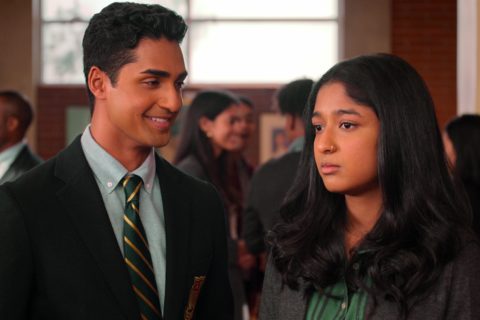 Never Have I Ever’s Maitreyi Ramakrishnan on Season 3, Self-Love and ‘Brown Boy’ Stereotypes

Plus, the star’s favourite looks from the show.

Playing a high-schooler who is still in the throes of self-discovery came easily for Mississauga, Ont.-born actor Maitreyi Ramakrishnan, the 20-year-old actor who stars as Devi Vishwakumar on the Netflix series Never Have I Ever.

Ramakrishnan is the first to admit she’s personally evolved from the 17-year-old kid who debuted in the Mindy-Kaling-created show three years ago, acting chops included. Devi is also maturing, while being tested with more dating drama.

If last season had Devi deciding between two love interests, Paxton (Darren Barnet) and Ben (Jaren Lewison), this season has fans further divided with Des, the hot new brown boy in town, played by Anirudh Pisharody. He challenges the stereotype of being a boring, geeky-looking South Asian nerd — in fact, Devi wrongly presumes that too until she sets her sights on him.

We caught up with Ramakrishnan to discuss season three, reconnecting with South Asian culture and how Devi has influenced her own style.

Devi is really tested this season. How would you describe season three?

Season one was about grief and then season two was about mental health. I think season three is definitely about self-love and self-respect for all the characters. Devi more so than anyone.

How did you feel about exploring Devi’s journey this time around?

I think what I like about it is that she has grown. She’s doing things that she would have never done in season one… She’s really matured [and yet] she’s still up to the same kind of shenanigans. Like her MO is still there and she’s still a menace, but I think it’s nice to see her grow and take on new ways of coping with stress because it helps me as an actor to explore different avenues of the mind of this character.

How parallel is that for you since you took on this character?

From 17 to now 20, I feel like I’ve grown the most I ever have in my life. Just like Devi is growing immensely as a TV character does… I would say my life has definitely changed. I’m not the same person I was.

I love how the show dives into South Asian traditions every season. How did you reconnect with new cultural traditions this time around?

Having Ranjita [Chakravarty, who plays Devi’s grandmother Nirmala] around, I love her to death. Anytime I’m in a scene with her, I get very happy. This season, we have a whole Navratri [Hindu festival] episode, which is really cool. Anytime I get to work with costumes to create a new half-sari look, I get very excited. I know back in season one, when we did the half-sari look and a lot of fans really appreciated that because it wasn’t just a generic South Asian outfit or even a generic lehenga, or like a full sari, because that wouldn’t really make sense for a young girl. We made it specific for Devi, and we got to take another stab at it in season three.

Devi and I honestly have very two different senses of fashion. Especially at the beginning of Never Have I Ever, I personally was someone who never wore colour. I really liked to stay away from colour for the most part. I still struggle to like match prints and stuff. Devi is on the whole other side of all the colour and all the accessories and necklaces and plaid and polka dots… But I will say that she has opened up colour for me. I think because I got to play around on set with different styles, I got to bring a little bit into my own life, but I still think I’m a little cooler than Devi.

What’s your favourite look for Devi this season?

That’s a good question… I’m going to say the  children’s performer outfit just because it was funny. The blue, red and yellow. I like that. I thought that was nice. But while we’re here, I want to just say my favourite outfit of the entire show is definitely when I got to dress up like a boy to sneak back into school to apologize to an Aneesa. That was my favourite. No one really asks me this and I love to talk about it because that was awesome.

One of the episodes deals with Devi being trolled. I’m curious, with the success and fame that has come with the show, how do you deal with trolls?

I do not try and seek out who the troll is. I try not to go on a whole investigation to figure out who the trolls are. I like to just let them be and let them do their thing. Just like Devi, you do get a little bothered by a troll…. [but] I don’t give them attention because they’re not worthy of your attention. I think it’s just better for me and my mental health. I tried to take Paxton’s advice. As Paxton said, “Just leave it. Who cares?”

The last episode is titled ‘Never Have I Ever Lived the Dream.’ What is the most surreal moment for you after you’ve had this iconic role playing Devi?

I think it’s everything that has happened to me so far. I never thought I would be an actor, let alone like you know, the lead of a hit Netflix show. Crazy. So I think because of that I didn’t even have this as a dream. Like it was never in the cards. But now I realize I am living the dream—a dream I just didn’t realize I could even make possible. So there’ve been a lot of surreal moments whether it’s press junkets like this or crazy photoshoots where I get to try on extravagant outfits. But if I had to boil it down, I would say for me, it’s [not just one moment but] every day I get to be on set. Nothing beats that feeling for me.

Just like John McEnroe does the voiceover for Devi, who would be the voice artist of your life?

I wish I had a better, funnier answer. But I only have a legitimate answer, that’s a little wholesome and that’s Mindy. I would really want Mindy. I mean, she’s seen me grow up now. She’s seen me grow up from that 17-year-old who walked in for her audition to now. And I feel like she would do a good job. She would definitely nail the comedic timing.

Photography Courtesy of Netflix © 2022
Get the best of FASHION in your inbox Thanks for signing up!
The latest fashion, beauty and celeb news delivered right to your email #FASHIONforall Now, check your inbox to complete your subscription
We won’t ever use your email address for anything else
Want even more FASHION? Follow us on social media.