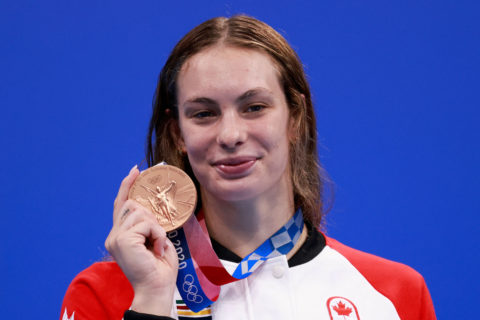 Are Women’s Sports Achievements Still Not As Highly Valued As Men’s?

On July 31, Penny Oleksiak became Canada's most decorated Olympian ever, but some say the victory didn't get the fanfare it deserved — and this points to deeper issues regarding women's representation in sports.

On July 31, Canadian history was made at the 2020 Tokyo Olympics. During the women’s 4×100-metre medley relay, Canadian swimmers Kylie Masse, Sydney Pickrem, Maggie Mac Neil and Penny Oleksiak finished with a time of 3:52.60 — breaking a national record, winning a bronze medal for Canada, and officially securing Oleksiak’s place as the most decorated Olympic athlete in Canadian history.

After winning 🥉 in the 4x100m medley relay, Penny Oleksiak is now #TeamCanada's most decorated Olympian of all time 🤩🤯🎉

At just 21 years old, Oleksiak now holds a total of seven Olympic medals. But despite her record-breaking victory, Oleksiak’s achievement as the newly minted most-decorated Canadian Olympian ever did not receive the fanfare that one might expect. On August 1, the lead story on CBC’s The National was about Olympic sprinter Andre De Grasse, who ran his personal best and won a bronze medal. The second, much shorter story of the show was Oleksiak’s historical news. On August 2, The Globe and Mail’s front page displayed a picture of De Grasse holding the Canadian flag with a headline about his bronze medal win. Further down on the page was a line in smaller font, with no photo, nodding to a story about Oleksiak’s victory.

These may seem like small details, and while De Grasse’s performance is certainly worthy of praise (he even went on to win a gold medal in the men’s 200-metre final on August 4), Oleksiak’s record-smashing win taking a backseat is symbolic of how women’s sports achievements are often not valued as highly as men’s. A 2014 study of major media outlets found that only four percent of all sports coverage went to women’s sports. This study was conducted during an Olympic and Paralympic year — when women’s sporting events are among their highest. Media coverage of women’s sports is lacking in both quantity and quality, says Allison Sandmeyer-Graves, CEO of Canadian Women & Sport, an organization committed to achieving gender equity in sports.

With a long history of being sexualized in the media, women in sports still deal with their womanhood being tied to their performances as athletes. In sports media, grown women are often referred to as “girls” and “ladies,” which implies expectations of femininity, Sandmeyer-Graves says. “There are these subtle ways in [which] women in sports are covered that just sort of diminishes them.” During the 2016 Rio Olympics, the Toronto Sun printed a cover story of a 16-year-old Oleksiak with the headline “Pretty Penny,” after she won two Olympic medals. This type of coverage, which focuses on a female athlete’s appearance, takes away from their sport-related achievements. Men, on the other hand, typically don’t have to worry about this type of unwanted attention.

“Men’s sport participation is celebrated daily … on dedicated channels and dedicated sections of the newspaper. And women don’t get that same kind of positive reinforcement for their involvement. It reflects a very different valuing of their participation than men’s participation in sport,” says Sandmeyer-Graves. When sports media coverage is constantly skewed towards men’s achievements, it teaches us not to value female athletes in the same way.

The Olympics’ commitment to showcasing women in sports increased this year, with schedules changed to air women’s sporting events during primetime slots, instead of in the off-hours, as done in previous Olympic Games. The 2020 Tokyo Olympics are the most gender-equal yet, with added events bringing women’s participation up to 49 percent for the first time ever. Sixty percent of athletes on Team Canada are female, and consequently, Canadian women have been dominating the Olympics. Some media outlets are also making efforts to increase their representation of women in sports beyond the Olympics, like CBC’s commitment to gender-balanced coverage.

“It’s so exciting to see strong, powerful, aggressive women on our TV screens [during the Olympics],” Sandmeyer-Graves says. “So many different body shapes and types, all performing at the absolute top of their game and giving it their all. That is such a liberating thing to see.” However, she notes that this is not an accurate representation of female athletes’ participation overall in Canada. A recent study found that one in four girls who actively participated in sports before COVID-19 aren’t committed to returning. We’re still operating under a sport system that caters to male players and male audiences, Sandmeyer-Graves says, and this is what’s causing girls to leave.

1 in 4 girls are not committed to returning to sport.

If we don’t act now to counter this trend, we could see over 350,000 girls sitting on the sidelines post-COVID-19.

Learn more in the COVID Alert: Pandemic Impact on Girls in Sport report ⬇

Because representation for women in sports is still lacking, it’s invaluable that women and girls have athletes like Penny Oleksiak to look up to. When she became Canada’s most decorated Olympian on July 31, Oleksiak said “this is only the beginning for team Canada in swimming,” adding that she’s excited for what future Olympics will hold. When those events come, and Oleksiak inevitably secures more wins, it’s crucial that she and her achievements are celebrated loudly, in the same way a male athlete would be.