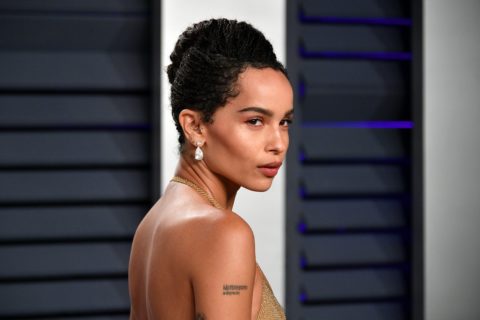 Zoe Kravitz will play Catwoman in The Batman
Robert Pattinson caused a stir when it was speculated that he would be taking on the role of Batman in the next film of the franchise, and now it looks like Zoe Kravitz is joining the film’s cast as Catwoman. On a congratulatory Instagram post by Jason Momoa—who is married to her mother Lisa Bonet—Kravitz commented: “Love that Aquaman and Catwoman spend the holidays together from now on.” Previous actresses to take on the superhero role include Anne Hathaway, Halle Berry and Michelle Pfeiffer.

I’m so proud of u zozo bear. On and off screen OHANA. DC WB ohana Lola and Wolfies big sister is CAT WOMAN??? Unbelievable so freaking stoked. Your going to have so much fun Aloha P bear

Air Canada announces new gender neutral greeting
According to CTV, Air Canada flight attendants will no longer use the binary “ladies and gentlemen” greeting on board their aircraft and for in-flight announcements. Instead, they will adopt “everybody” as a gender-neutral term. “We will be amending our onboard announcements to modernize them and remove specific references to gender,” an Air Canada spokesperson said, although it has not yet been confirmed when the new gender-neutral greetings will be implemented.

The company will be replacing gendered terms in scripted greetings with neutral words like "everybody" or "tout le monde". https://t.co/O84f767cim

Margaret Atwood wins joint Booker Prize
For her new book The Testaments, the much-awaited sequel to The Handmaid’s Tale, celebrated Canadian author Margaret Atwood won the prestigious Booker Prize for Fiction—sort of. Technically, she shares the prize with British author Bernardine Evaristo, whose novel Girl, Woman, Other follows the lives of 12 characters (mostly black women) as they negotiate the world. With this win, Evaristo becomes the first black woman to win the Booker in its 50-year history, though the award’s judges have received criticism for splitting the prize between two writers instead of presenting Evaristo with her sole history-making win.