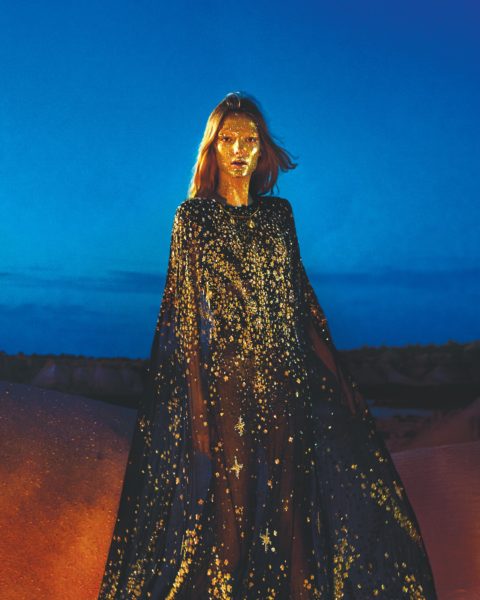 Why Are Women Turning to Witchcraft?

There was little place for the word “witch” in my Roman Catholic upbringing. Yet, despite nuns patrolling the school halls and weekly confession at church, I felt a magnetic pull toward all things witchy. I became obsessed with the film The Craft, begged my parents for a Ouija board and even held lunchtime “seances” with my schoolmates, one of which I’m still convinced created a towering swirl of dust that sent everyone running for the hills.

My flirtation with the occult lasted into middle school and was mostly a superficial study in teen angst. I frequented Hot Topic at the mall, experimented with gothic garb on the weekends, surreptitiously got a few untoward piercings and blasted Garbage, Veruca Salt and Hole from my bedroom. As I entered my senior year, my inner anarchist was tamed by my desire to succeed academically and socially. My alternative choices weren’t winning me any popularity contests, so I befriended our high school’s queen bee, started dating a football player and traded in my studded choker for pink lipgloss.

It’s not hard to see why I was so quick to abandon my witchy inclinations. Throughout history, the word “witch” has been demonized, used to describe ugly old hags lurking in the woods and plotting devilish schemes or conspiring to eat little children. In reality, witchcraft has less to do with the sordid rituals depicted in movies than it does a woman’s innate connection to nature, inner wisdom and intuition, explains writer Lisa Lister in her book Witch: Unleashed. Untamed. Unapologetic. “A witch is a woman in her power,” says Lister, whose book offers ways women can use magic to self-heal, manifest dreams and create change. This is a truth the pagan community has known since time immemorial, but today, elements of witchcraft, like tarot readings, smoke cleansing and healing crystals, have become part of our vernacular. Women today are feeling the same draw toward their own magic that I felt as a child. Yet “witch” has been used as a pejorative for centuries.

Today, elements of witchcraft, like tarot readings, smoke cleansing and healing crystals, have become part of our vernacular. Women today are feeling the same draw toward their own magic that I felt as a child.

Witchcraft, a term used to describe a wide range of practices and pagan belief systems, has its roots in the Goddess religions of ancient Europe and the Middle East. This ancient earth-based spirit­uality celebrates the divine feminine and holds a deep reverence for nature, the cycles of the seasons and female sexuality at its core. Slowly, Goddess religions were superseded by war-based, patriarchal belief systems, the most well-known example being Christianity. From the 15th to 17th centuries, the Church unleashed the force of the Inquisition to convert non-believers and suppress dissent, during which women were used as scapegoats for political and social unrest.

Under the guidance of the tome Malleus Maleficarum (“The Hammer of the Witches”), millions of women were declared heretics and tortured, hung or burned alive during the infamous witch hunts. This female genocide targeted any woman with property or power, women who practised herbal or natural forms of healing (midwives in particular) and women who displayed sexual independence.

“If you read the witch trial accounts, it’s all about sexuality being this horrible, dangerous force,” says Starhawk, a Witch, activist and one of the founding mothers of neo-Goddess religion. Starhawk says the legacy of this fear mongering is still evident today. “The persecutions have left us with fear around standing up, taking our power and speaking out,” she explains. “They have left us with a sense that power, especially spiritual power, that isn’t affected by or accepted by the authorities is somehow dangerous and suspect.”

*NEW* Selenite! Here is an amazing, large piece of natural Selenite with beautiful mineral inclusions from Lavrion District, Attiki Prefecture, Greece. It has a beautiful, artistic presentation and is quite large! Mental Clarity, Angelic guidance, healing Selenite can evoke protection from the angelic realm and also dispels negative energy. Use Selenite in a grid around your home or in the corners of a room to create a safe and peaceful space. Selenite also removes energy blocks from physical and etheric bodies. • selenite photographed is listed as “6.5 x 2” – this is a unique specimen, there is only 1! •all pieces are listed by measurement •each mineral is a unique one of a kind piece, no two have the same formation and will vary depending on inventory. ?Shop Now ? (link in bio) #selenite #collectivehealing #minerals #crystalhealing #angelicrealm #highvibration #witchesofinstagram #crystalshop #cosmicconsciousness #brujasofinstagram #selenitewand ?: @thehoodwitch tag & credit all repost

In case you missed it, the witch—Wiccan and beyond—is having a moment in pop culture. Millennials are turning to traditional forms of divination like tarot, #witchfashion and #modernwitch yield thousands of results on Instagram and celeb­rities are publicly identifying as witches. Post-Trump election, Lana Del Rey admitted to casting a hex on the president as part of a worldwide movement to bind Trump through magic ritual led by Michael M. Hughes, author of the recently released Magic for the Resistance: Rituals and Spells for Change. Lorde is quoted as calling her group of friends her “coven” and has become an icon for gothic fashion. Vanity Fair dubbed her “The Queen of Darkness.” Influencers like Bri Luna of The Hoodwitch are part of the vanguard that is defining the modern witch, with an Instagram aesthetic that garners over 300,000 followers and touts “everyday magic for the modern mystic.”

The witch aesthetic is de rigueur. Fashion labels such as Comme des Garçons, Vivienne Westwood and Alexander McQueen have all turned to the dark, subversive style of the witch in their designs. Experimental designers Edward Meadham and Clio Peppiatt looked to the witch for inspiration in their Spring 2018 collections. Peppiatt was inspired by the 2016 film The Love Witch, a lush technicolour dream that satirizes how female sexuality is portrayed in the horror genre. Tarot-card motifs, skeletons and cosmic references abound.

In her book Witches, Sluts, Feminists, modern witch and writer Kristen J. Sollée notes that during the witch-hunting era, “glamour” meant a magic spell of illusion cast by a witch. “The traditional witch aesthetic is about dressing for yourself, not for the male gaze,” explains Sollée, who teaches a class on the legacy of the witch at New York’s New School. “Black is also stereotypically not considered a feminine colour, so, in a way, there’s a rejection of traditional femininity when you’re dressing like the witch,” she adds. The witch was the original Man Repeller. However, dressing in dark, gothic style is by no means a requirement to practise witchcraft. “You can totally be a pink, patent-leather, leopard-print witch,” notes Sollée.

Modern metaphysical shops and tarot boutiques are also a far cry from their dark, beaded-curtain, incense-shrouded predecessors. Passersby could easily mistake Vancouver’s The Good Spirit for a chic home-decor boutique torn from the pages of Dwell Magazine: White walls and sparse greenery are the backdrop for bowls of colourful crystals and artfully displayed bundles of sage and juniper; Scandinavian-style chairs and tables adorned with white hydrangeas and candles set the stage for tarot readings. “I didn’t feel like there was a place that spoke to a new generation of people tapping into their spirit­uality that would seem relatable,” says owner Savannah Olsen. “Our aesthetic means that we get a lot of first-time readings.”

For those for whom witchcraft has been a deep, lifelong spiritual practice, this shift of witchcraft and its accoutrements from the fringes to the mainstream is both galvanizing and problematic. As when any marginalized movement becomes popular, there is the fear that its mass consumption will cheapen or water down its ethos, or that its symbols will be appropriated by those who lack the esoteric knowledge that grants a deeper understanding. As Sollée outlines in the chapter “Hex Sells: Feminism, Capitalism, and the Witch,” the major issue with the commodification of witchcraft is that in some cases it feeds into a mindless consumer culture. When you pick up a smudging stick or tarot deck from a big chain like Urban Outfitters, you may be unknowingly supporting overseas sweatshops that pollute the environment or exploit women, explains Sollée. The upside is that the exploration of some of witchcraft’s more superficial aspects can act as a gateway to meaningful belief and practice. “I think it’s great,” says Starhawk. “Out of that initial interest people may say ‘I’m going to do more than just dress the part; I’m going to study, read and find some groups I can learn from.’”

One arena in which the mainstream co-opting of witchcraft seems to have gone deeper than surface level is the political sphere. In our Trump-era political landscape, when women’s sexual and reproductive rights are under siege, it seems appropriate that women are turning to the symbol of the witch for empowerment. “Historically, the word ‘witch’ has been used to punish women and police female sexuality,” says Sollée. “The word ‘slut’ is the same in that both have been used to ostracize women and mark them as less than.” Although the feminist reclaiming of the word “witch” can be traced back to the suffragists, and later the W.I.T.C.H. movement of the ’60s, its recent thrust into the spotlight can be partly attributed to the 2016 election.

The word was weaponized against Hillary Clinton during the presidential campaign. In addition to Trump’s infamous “nasty woman” remark, Hillary was called “the wicked witch of the left” and “the devil,” and radio host Rush Limbaugh declared her a “witch with a capital B.” In reaction, Hillary supporters subverted this rhetoric, declaring themselves “witches for Hillary.” “Women flipped the script and the narrative,” says Sollée. “If everyone’s going to call Hillary a witch, well, yeah, witches are fucking cool. Witches are empowered women.”

The widespread appeal of the witch circa 2018 goes beyond feminism. Witchcraft’s reverence for nature and its negation of so many cornerstones of capitalist culture strike at the core of some of the greatest issues of our time. With heartbreaking reminders of the planet’s decimation spreading like wildfire (quite literally), turning to ancient practices that exalt nature and, in many cases, work toward conservation resonates with people. Much of the ritual work Starhawk leads is focused on environmental restoration. “The core of Goddess religion is the work of regeneration, and to me that’s very sacred work,” she says. At a time in history when our lives are predominantly digital, voice-activated and automatic, the tactile, earthy qualities of witchcraft, such as smoke cleansing, tarot card readings and other ritual work, may also touch on a longing in all of us for something real that we can connect with.

The widespread appeal of the witch circa 2018 goes beyond feminism. Witchcraft’s reverence for nature and its negation of so many cornerstones of capitalist culture strike at the core of some of the greatest issues of our time.

While I can thank my childhood years in the confessional for jump-starting my career as a writer and storyteller, being in touch with my own power, intellect and sexuality is something I no longer feel the need to atone for. I may not join a coven, but if we’re speaking of empowered, creative, politically-conscious women, “witch” is a word I’m happy to define myself with. At a time when the rights of marginalized people are under fire and the planet is suffering, identifying with the witch, a symbol of solidarity and liberation, is a radical act of rebellion. It’s the witching hour.