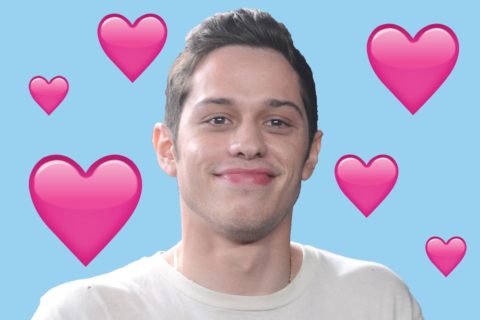 Who is Pete Davidson? Everything You Need To Know About Ariana Grande’s New Fiancé

Everyone wants a little bit of whatever Ariana Grande and Pete Davidson are feeling right now. After a whirwild rebound romance—featuring the requisite amount of matching tattoos and gross social media PDA—a very shiny, very expensive ring has been placed on Grande’s dainty finger. Ahhhh young love must be good when you can afford a $100,000 symbol of commitment!

The question now on everyone’s mind: who exactly is this lanky boy-like man who popped the question to pop’s favourite princess? You may know him as the pothead teenager from Saturday Night Live—but rest assured, Pete Davidson is so much more than that. I was swooning after reading his Wikipedia page. Seriously.

Here’s everything you need to know about Ariana Grande’s fiancé.

Davidson joined the cast of Saturday Night Live in September 2014, during the show’s 40th-season premiere. He was just 20 years old at the time, making him one of the youngest SNL cast members ever (Eddie Murphy was 19 when he joined) and the first to be born in the 1990s. Davidson scored his audition through SNL regular Bill Hader, whom Davidson met on the set of Amy Schumer and Judd Apatow’s film, Trainwreck.

He used to date Cazzie David

Not so long ago, Davidson was in a longterm relationship with Larry David’s eldest daughter, Cazzie David. The young pair met when her father hosted Saturday Night Live in February 2015. Soon after they started dating, Davidson got a self-portrait that Cazzie drew when she was five tattooed on his arm, according to Complex.

On May 16, People confirmed that the couple, who had been together for two years, split.

When Davidson was just seven years old, his father, a New York City firefighter, died in the September 11, 2001 terrorist attacks. The trauma of losing his father is something Davidson dealt with through his youth. “It was overwhelming,” he told The New York Times, saying that, at one point, he ripped all his hair out until he was bald. He has 8418, his father’s badge number, tattooed on his left arm.

In March 2015, Davidson joined Snoop Dogg, Martha Stewart and Kevin Hart as a roaster on the infamous Comedy Central Roast of Justin Bieber. Davidson made headlines after calling out Snoop and Hart’s 2004 film Soul Plane “the worst experience of my life involving a plane.” (See previous fact to fully grasp that punch line.)

He has a tattoo of Hillary Clinton

Davidson supported Hillary Clinton in the 2016 U.S. presidential election, and on December 5, 2017, he revealed on his Instagram account that he got a tattoo on his leg of Clinton, whom he called his “hero”, a “badass”, and “one of the strongest people in the universe.” Clinton herself thanked Davidson for the compliment, commenting, “This makes it significantly less awkward that I’ve had a Pete Davidson tattoo for years.”

Wanted to get @hillaryclinton a Christmas gift so I got a tattoo of my hero. Thanks for being such a badass and one of the strongest people in the universe ? Tatt by @jonmesatattoos

He has a complicated history with marijuana

When he was either 17 or 18 (the Internet is inconclusive) Davidson was diagnosed with Crohn’s disease. Medical marijuana is, of course, a commonly used pain reliever for those who suffer from the inflammatory bowel disease. Davidson took to the medication well: back in 2016, Davidson told High Times that he couldn’t function without smoking up, saying, “I wouldn’t be able to perform on SNL if I couldn’t smoke weed!”

On March 6, 2017, Davidson announced on his Instagram account that he attended rehab and was sober for the first time in eight years. He later clarified on comedian Marc Maron’s popular podcast, WTF with Marc Maron, that the only drug he used was marijuana. He also shared that, after cutting back on his use of marijuana, he wasn’t feeling the relief he’d expected to. Having sought further help, Davidson has since learned that the personal problems he was accrediting to drug use were actually caused by borderline personality disorder.

“Party’s back on,” he said during a recent interview with Peter Rosenberg on Open Late. “I found out I had a mental disorder. I thought I had a drug problem. It’s a completely different thing.”

“You can be sad and do drugs at the same time, evidently,” he said. “I got sober for three months and I was just like never sadder and everything was just way worse.”

Davidson, who was diagnosed with BPD in 2016, has spoken candidly on Saturday Night Live and in interviews about his struggles with the mental illness. “I found out I have BPD, which is borderline personality disorder,” he revealed to Maron, detailing his journey to diagnoses. “One of my psychiatrists [diagnosed me]. He was always saying before this big meltdown, ‘You’re probably bipolar or borderline, we’re just going to have to figure it out.’ ”

“It is working, slowly but surely,” Davidson continued. “I’ve been having a lot of problems. This whole year has been a f—ing nightmare. This has been the worst year of my life, getting diagnosed with this and trying to figure out how to learn with this and live with this.”

On May 24, 2018, days into his rumoured relationship with Ariana Grande, Davidson shared a screenshot of a Notes App message to his social media. “Normally I wouldn’t comment on something like cause like fuck you but I been hearing a lot of ‘people with [borderline personality disorder] can’t be in relationships’ talk,” Davidson wrote. “Just because someone has a mental illness does not mean they can’t be happy and in a relationship. It also doesn’t mean that person makes the relationship toxic. I just think it’s fucked up to stigmatize people as crazy and say that they are unable to do stuff that anyone can do. It’s not their fault and it’s the wrong way for people to look at things.”

Muggle translation: he loves Harry Potter. Davidson has several Potter-inspired tattoos and has been very vocal about his involvement in the fandom. The J. K. Rowling world seems to be the one thing that the comedian has in common with Grande, a fellow outspoken Potterhead.

the chamber of secrets has been opened …

Double dates? Couples retreats? The next generation of Clooneys and Gerbers?

Away game for the SQUADRON

He was recently Queer Eye’d

During which he compares himself to Timothée Chalamet. Watch and enjoy.