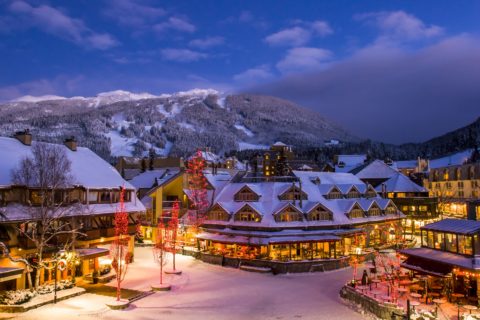 Set amidst the snow-capped mountains of British Columbia, the Whistler Film Festival is certainly one of the most picturesque sites to spend a few days watching movies. This year, for its 19th edition, the festival is screening a whopping 43 feature-length films, of which 15 will be celebrating their world premieres. In addition to film screenings, the five-day festival—which runs from December 4 to 8—will also play host to 10 “talent programs” for Canadians working in the film industry in various capacities. These programs include intensive workshops for screenwriters, producers and documentary filmmakers; a fellowship for emerging indigenous filmmakers; and a mentorship program for women in the film and television industry. If you live in the area or are contemplating making a weekend trip to catch some films, here’s what should be on your radar.

The festival opens with this harrowing tale about mental illness, starring Simon Pegg as a schizophrenic musician and Juno Temple as a songwriter struggling with depression. “Most people have a sort of idea of what schizophrenia is, [but] it’s completely mischaracterized in the mainstream public consciousness,” Pegg tells Variety. “So it was really fascinating and challenging to get to play that role.” Alexandra Daddario, Rosanna Arquette and The Florida Project breakout star Bria Vinaite also star in the film, which Pegg is excited to be screening in Whistler. “It’s such a beautiful part of British Columbia. And it’s lovely for us to be the opening film there for a little film like this, which is very much a low-budget affair. It’s such an auspicious festival and it’s all you can hope for when you make these smaller films.”

Chelsea Peretti makes her debut as the lead of a feature film in Spinster, which will have its world premiere in Whistler on December 6. The Brooklyn Nine-Nine alum stars as Gaby, a woman whose boyfriend breaks up with her on her 39th birthday. Faced with the prospect of becoming a lonely spinster, Gaby embarks on a series of blind dates with comic results. In addition to premiering her film at the festival, Peretti will also be receiving the Trailblazer Award this year.

#WFF19 Presents: SPINSTER Directed by Andrea Dorfman World Premiere ________ Gaby, unceremoniously dumped on her 39th birthday is petrified she'll be alone forever, so she embarks on a dating frenzy only to discover that her problem isn't that she doesn't have a love life – its that she doesn't have a life. Featuring an incredibly engaging and hilarious performance by @chelsanity _________ Ticket Packages available now – link in bio #ittakesavillage #SPINSTER

Canada’s official entry for the 2020 Oscars’ Best International Feature category, Antigone is a modern-day adaptation of Sophocles’ Greek tragedy. Directed by critically acclaimed Québécois writer-director Sophie Deraspe, the film tells the story about an immigrant family in Montreal whose lives are turned upside down by tragedy. At the heart of it all is a young woman—played by a staggering Nahema Ricci in her feature film debut—whose loyalty to her family leads her down a path of recklessness and sacrifice.

4. Alone Across the Arctic

This documentary film follows acclaimed explorer Adam Shoalts as he embarks on an extraordinary trek across 4,000 kilometres of the remote North. Dubbed ‘Canada’s Indiana Jones’ by the Toronto Star, Shoalts traverses the northernmost wilds of Canada, from the Yukon to Nunavut, over the course of four months, with the goal of completing his treacherous journey before the onset of winter. Capturing the majority of the film’s footage on a Sony AX100 and GoPro, Shaolts’ work is rounded out with visuals by director Francis Luta.

The festival will close with a double billing of Grosso’s Loveletters to Skateboarding: Canada and The Tony Alva Story. The former, an episode from season 10 of Jeff Grosso’s Love Letters to Skateboarding series, showcases some of Canada’s most iconic skate spots and features local icons like Joe Buffalo in Ottawa and Rob Boyce in Vancouver. The episode will be followed by The Tony Alva Story, a documentary that chronicles how Santa Monica-born Tony Alva became known as the godfather of modern-day skateboarding.